Has “America-First” President Donald Trump put the interests of Israel ahead of those of the United States in recognizing Jerusalem as Israel’s capital and announcing the U.S. embassy will be moved from Tel Aviv to Jerusalem? The president’s announcement is in stark contrast to the U.S. government’s 50-year position supporting the removal of Israeli military forces from territories captured in 1967.

President Donald Trump’s recognition of Jerusalem as Israel’s capital and his stated intention to relocate the U.S. embassy from Tel Aviv to Jerusalem does not benefit the United States in any way and will almost certainly do great harm to the American people. It is ironic that a man who ran for president based on a simple slogan “America first” has instead put Americans at risk by deferring to Israeli interests without any regard for the consequences of such action.

The subordination of U.S. interests to those of Israel will no doubt be pondered by historians 20 years from now, if the United States of America continues to survive that long. Israel would not appear to be a good candidate for Washington’s best friend in the whole world, which is where the political class and media have placed it. It’s the only country in the world largely composed of settler-colonists and descendants that has been allowed to displace and perpetually punish the former inhabitants. It’s also a country with a terrible human rights record that nevertheless is able to tap U.S. taxpayers for billions of dollars in aid and other freebies annually combined with American-provided political protection from bodies like the United Nations. And it does all that through the operation of a fifth column of co-ethnic-religionists hugely over-represented amongst U.S. elites and organized to put the interests of Israel ahead of the interests of the United States.

The declaration that Jerusalem is Israel’s capital is the latest disgrace, most particularly because Israel, which has no borders, has no legal title to much of the land that it is claiming. But the move is not a matter of law, but rather the product of decades of pressure by both Israel and its powerful domestic U.S. lobby. Now that Jerusalem is part of Israel, the next step will be to “legalize” the occupation of the West Bank, which will be accompanied by the ethnic cleansing of the remaining Palestinians.

The original 1947 United Nations partition plan that created Israel called for Jerusalem to be “internationalized,” but that arrangement was subverted when Israeli terrorists expanded the area it controlled and began the ethnic cleansing of the Palestinians. U.S. presidents have put off moving the U.S. embassy to Jerusalem because of UN Security Council Resolution 478, passed in 1980, which contradicted Israel’s declaration that Jerusalem was its “complete and united capital.” East Jerusalem was territory captured in the 1967 Six-Day War, which historians recognize as a war that Israel started. Resolution 478 led to the placing of foreign diplomatic missions anywhere in Israel but Jerusalem, putting the lie to the Israeli pretensions. Since 1967, the U.S. has also supported UN resolution 242, calling for the removal of Israeli military forces from territories captured in 1967.

All those responsible positions taken by Washington in the past have now been upended by the Trump White House action. Heavy lobbying by pro-Israel organizations, which began in earnest in the 1980s, demanded a “move the embassy” law that would seek to legitimize Israel’s claims on the entire city. The pressure was particularly intense on Congress, resulting in the Jerusalem Embassy Act of 1995 under President Bill Clinton. The act was actually drafted by the Zionist Organization of America and AIPAC.

It is important to recognize that when it comes to Israel, no legitimate U.S.-driven interests are ever in play. Rather, it is a case of effective, multi-billion-dollar lobbying mounted by those mostly Jewish organizations and individuals that are heavily focused on promoting Israeli interests. Politicians at all levels in the United States are now routinely screened by the Israel lobby and are made to state their views on the Middle East conflict before they enter primaries or otherwise run for office.

Israel uniquely employs thousands of Internet trolls who work to counter any perception that their country is behaving badly. They have been hard at work since Trump made his announcement. Anyone asserting in the media that the Palestinians have again been robbed is attacked from all sides by commenters using American-sounding names but writing often non-native English. The comments are, ironically enough, full of suggestions that Arabs are somehow subhuman and incapable of negotiating their own futures.

Jewish talking heads embedded in the media have also fulsomely praised Trump’s apparently brilliant decision to follow the “one road to peace.” As Israeli Prime Minister Benjamin Netanyahu once observed that the 9/11 attack on the United States had been “good for Israel,” it would almost certainly be wise to consider the source and the objective when articles appear praising Trump. One recent piece on the embassy move as the road to peace was actually written by the Israeli ambassador.

Particularly discouraging is the lining up of leading Democratic Party politicians to praise the Trump move. Senate Minority Leader Chuck Schumer (D-N.Y.), who is Jewish and who fancies himself Israel’s “shomer” or defender in the Congress, has been prominent. Sen. Ben Cardin (D-Md.), also Jewish and one of the leaders in the Senate’s promoting and passing pro-Israel legislation, was also very supportive. Some critical media has observed that both men have been conspicuously more active in responding to the “needs” of the American Israel Public Affairs Committee (AIPAC) rather than those of their own constituents.

Back in 1962, the Kennedy administration tried to have the predecessor organization of AIPAC, the American Zionist Council, register as a foreign agent precisely because it was feared that Israel would exploit American Jews to interfere in U.S. politics to support Israeli governments even when contrary to U.S. interests. That is precisely what has happened. Unfortunately, Kennedy died and the Department of Justice never enforced the registration order.

It is still early days but the Jerusalem decision by Trump has already pitted the United States against the entire world with the sole exception of Israel. Nothing good can come out of it. The only question is: When will Americans see the light and force their leaders to take back our government, and will that happen before it is too late?

Philip Giraldi is a former CIA counter-terrorism specialist and military intelligence officer and a columnist and television commentator. He is also the executive director of the Council for the National Interest. This article appeared on the website of “The Unz Review.” 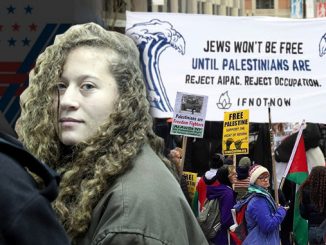 One in Nine Congressmen Is ‘Re-Educated’ in Israel

4 Comments on Trump Decision to Move Embassy to Jerusalem Will Harm U.S.