Talk of impeachment may inspire the president to challenge warmongers. That would be a good thing!

On Sept. 11, 2001, Donald Trump correctly stated that explosives must have been used to destroy the World Trade Center skyscrapers. Mere plane crashes, he observed, should not have been able to destroy the “big, heavy I-beams.”

Since that dark day 18 years ago, Trump has kept his private skepticism about what brought down the twin towers to himself, but he has been candid, often outspoken, about the folly of the 9/11 wars.

On Oct. 9 of this year he tweeted: “The United States has spent $8 trillion fighting and policing in the Middle East. Thousands of our great soldiers have died or been badly wounded. Millions of people have died on the other side. Going into the Middle East is the worst decision ever made. …”

That sounds like the real Trump—the one who has stopped caring what the neoliberal media, his own neocon advisors, and the Washington establishment in general think of him. It seems that the establishment’s push to impeach Trump may have backfired. Instead of convincing Trump to toe the line and follow the path of least resistance, the impeachment inquiry seems to have stiffened the president’s spine.

The imperialists, both neoliberal and neoconservative, are outraged by Trump’s decision to stop supporting Kurdish separatists in Syria. They are screaming that Trump has surrendered to Turkish President Recep Erdogan. Trump’s relatively friendly personal relations with Erdogan, Russian President Vladimir Putin, North Korean Supreme Leader Kim Jong-un, Chinese President Xi Jinping, and others is presented by the neocon-neolib media as another form of “collusion.”

The same people who oppose Trump’s pullout from Syria are also complaining about the president’s decision to withdraw from Afghanistan. In both cases, they say, the “terrorists” are coming to get us. If we don’t fight them over there, the saying goes, we’ll have to fight them over here.

Trump has been accused of hating and slandering Muslims. But in deploring the mass murder of millions by U.S. forces in the Middle East, Trump sounds far more sensitive and compassionate than the Democrats. What Democrat, other than Tulsi Gabbard, would ever tweet anything like “Millions of people have died on the other side. Going into the Middle East is the worst decision ever made … .”?

Trump’s America-first attitude terrifies the establishment. On Jan. 19, 2018, Deep State denizens John Kelly, H.R. McMaster, Rex Tillerson, and James Mad Dog Mattis dragged Trump to a special National Security Council meeting in the Situation Room. They hammered away at Trump with a presentation on “why America must police the world.” According to Bob Woodward’s book Fear, Trump was unconvinced, responding: “We [have] spent $7 trillion in the Middle East. We can’t even muster $1 trillion for domestic infrastructure.”

The Deep Staters were horrified. Mattis compared Trump to “a fifth or sixth grader.” Tillerson called Trump a “moron.” Trump’s ex-lawyer Dowd piled on, telling Robert Mueller that Trump is “an idiot … a goddamn dumbbell.”

But what is so stupid about wondering why the U.S. needs to spend $7 trillion policing the Middle East for Israel? Is it only fifth and six graders who understand that murdering 27 million people for no apparent good reason is just plain wrong?

Woodward’s Fear depicts a president who has been assiduously trying to extract America’s military from its seemingly endless Middle Eastern quagmires, only to be stymied, browbeaten, and resisted at every turn by his advisors and the rest of official Washington. Woodward explains that Trump’s aides have pulled off “nothing less than an administrative coup d’état, an undermining of the will of the president of the United States and his constitutional authority.”

Will Trump, angered by impeachment efforts, choose to reclaim his constitutional authority and put a definitive end to the 9/11 wars? 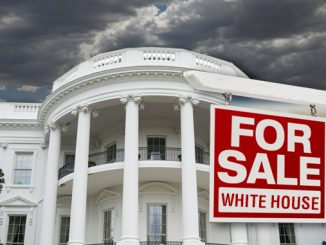 Is the White House Really Up for Sale?

Why the Electoral College Must Never Be Abolished

1 Comment on Trump Can End Bogus ‘War on Terror’