According to draft reports from the Department of Homeland Security (DHS) that have yet to be officially published, “white supremacists” pose the greatest terror threat to the United States, despite radical far-left extremists, Antifa members and Black Lives Matter activists—both black and white—rioting, looting, and engaging in massive criminality and violence in countless American cities for the past few months.

Three draft reports of the DHS’s “State of the Homeland Threat Assessment 2020” were recently leaked to and reviewed by “Politico.com,” a media outlet covering politics and public policy based in the Washington, D.C. area. The draft reports, which the DHS has not publicly commented on, do not appear to specifically mention or cite Antifa or Black Lives Matter as threats facing the homeland.

The drafts also note that “violent extremists”—rather than white supremacist extremists specifically—“will continue their efforts to exploit public fears associated with Covid-19 and social grievances driving lawful protests to incite violence, intimidate targets, and promote their violent extremist ideologies,” an apparent reference to violent left-wing extremists and agitators who have been so obviously present at rallies and protests across the country in recent months. “Simple tactics—such as vehicle ramming, small arms, edged weapons, arson, and rudimentary improvised explosive devices—probably will be most common,” the drafts state, once again alluding to tactics used by protesters and rioters in recent months.

“This draft document seems to be consistent with earlier intelligence reports from DHS, the FBI, and other law enforcement sources: that the most significant terror-related threat facing the U.S. today comes from violent extremists who are motivated by white supremacy and other far-right ideological causes,” John Cohen, a former DHS counterterrorism analyst, explained to “Politico,” demonstrating the longstanding acceptance and promotion of the idea of white supremacist extremism posing a major terror threat to the United States.

News of the draft reports comes as a DHS whistleblower, described by a White House spokeswoman recently as “a disgruntled former employee,” has claimed that agency analysts were directed by top officials at DHS to soft-pedal the purported threat of white supremacist extremism as well as the notion of Russian interference in the upcoming presidential election. The draft documents reviewed by “Politico” appear to refute the whistleblower, however.

That did not stop Jonathan Greenblatt, national director of the ADL, from denouncing the Donald Trump administration, hysterically stating that “it is dangerous” that the administration “willfully chose to ignore its own intel assessments and put people at risk.” Greenblatt went on to insist that data from the ADL as well as DHS, which is influenced by the ADL and often works in partnership with the organization, “shows that white supremacists and right-wing extremists pose the greatest domestic terror threat, full stop.”

President Trump, meanwhile, has continued to focus on the violence, criminality, and mayhem being caused by radical left-wing protesters, vandals and hooligans, making it a central theme of his presidential campaign. He has denounced the rioting, looting, and violence and repeatedly vowed to restore law and order, while the Democratic establishment and their presidential nominee Joe Biden continue to hype the purported threat of white supremacist extremism while downplaying and, in certain instances, justifying the criminal violence and mayhem that have rocked American cities this year.

Joe Biden has made combatting purported white supremacy and racism a central theme of his campaign, invoking the ideas when he originally announced his presidential campaign as well as during his recent acceptance speech at the Democratic National Convention. The Biden campaign and Democrats more generally have been reluctant to condemn and denounce the widespread violence and criminality plaguing American cities, virtually all of which has been instigated and carried out by radical elements of the far left. As portions of American cities go up

in flames and average citizens and law enforcement officers continue to be targets of the radical left, the 2020 election is increasingly becoming a referendum on restoring the rule of law and sanity in a chaotic and divided country. 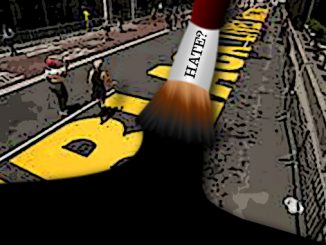