AMERICAN FREE PRESS has extensively covered the movement to have genetically modified organisms (GMOs) labeled. In the past few years, a number of states around the United States have made advances in identifying for consumers the GMOs that are in our food supply, but now progress on that effort appears to have suffered a significant setback.

The grassroots effort to legally require the labeling of GMOs may have been lost on July 7 when the Senate moved the House version of the “Safe Food Labeling Act” forward in a 65-32 vote.

Senator Charles Patrick “Pat” Roberts (R-Kan.) introduced in the Senate a version of the bill similar to Kansas Republican Representative Michael Richard Pompeo’s “Safe and Accurate Food Labeling Act,” which was passed by the House of Representatives, 275 to 150, on July 23, 2015.

Activists who oppose Pompeo’s bill named it the DARK Act because, when it comes to knowing what’s in our foods, the bill could more accurately be called the Deny Americans the Right to Know Act. Activists shot down previous legislative efforts and sneak attempts, but now the Stabenow-Roberts compromise will likely become law.

The compromise will be returned to the House of Representatives, where it could be changed, though it is unlikely meaningful revisions will be made that would fix the Senate version to satisfy the concerns of health-conscious Americans.

As of July 11, Speaker of the House Paul Davis Ryan (Wisc.) informed activists the compromise is being marked up, meaning it will likely be pushed through the House for passage and then sent to President Barack Hussein Obama for signature.

The powerful Grocery Manufacturers Association sued in Vermont to have the law invalidated, but a judge ruled against them, upholding the labeling law.

The Stabenow-Roberts compromise preempts state law, rendering powerless state laws on the issue of mandatory labeling. Curiously, many Republican senators who talk a good game about the importance of freedom and states rights voted to preempt Vermont law.

Senators Rafael Edward “Ted” Cruz (R-Texas) and Marco Antonio Rubio (R-Fla.), both Republican presidential contenders, pontificated on the forgotten 10th Amendment during their campaigns and in debates, but supported the compromise, which overrides the wishes of Vermont citizens.

Vermont activists were outraged at the Senate’s vote.

“Every Vermonter, and every American who cares about the food they eat and the democracy they live in, should be outraged by what the U.S. Senate just did. This bill is a corporate giveaway masquerading as a GMO labeling ‘compromise.’ Senate leadership has chosen corporate lobbyists over the 90% of Americans who support labeling. Without a single committee hearing, and allowing for no amendments, they’ve passed a bill so riddled with loopholes and delays, so unenforceable, that even the FDA has argued it may not lead to a single product being labeled. They should be ashamed.”

Food and biotech behemoths spent roughly $100 million in 2015 alone to oppose labeling efforts in California, Colorado, and Oregon where citizen petitions were shot down by intentionally confusing political counter-attacks. Vermont’s success could have easily been a model for other states.

How did the DARK Act compromise receive 63 Senate votes to move forward when it had previously failed to advance?

“The American GMO labeling movement has been rocked by the most outrageous betrayal imaginable. While you and your friends have been fighting for mandatory GMO labeling, the giant corporate organic companies that are owned by parent companies have just climbed into bed with Monsanto and stuck a knife in the back of every American who’s ever fought for GMO labeling.” 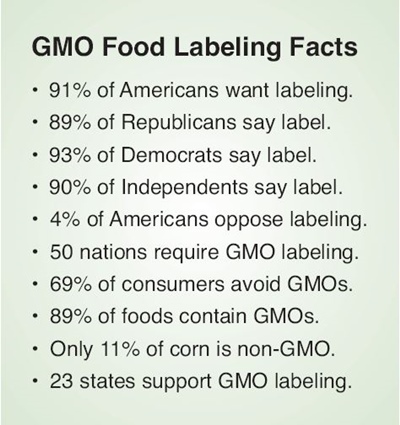 “After years of using [the nonprofit organization] Just Label It as a corporate front group to undermine real grassroots campaigns, GMO labeling ballot initiatives and people like you, Gary Hirshberg and Just Label It are finally showing their true colors and working publicly to make it easier for corrupt senators to vote for this toxic backroom deal that will undermine every American mother’s basic right to know what’s in the food they’re feeding their children, like mothers in 64 other countries around the world already possess.”

Hirshberg, founder of Just Label It! and chairman of Stonyfield Farm, was alleged to have worked too comfortably with USDA Secretary Tom Vilsack, former Biotechnology Industry Organization’s “Governor of the Year,” when he issued this statement on June 23: “We are pleased this proposal will finally create a national, mandatory GMO disclosure system, protects organic labels, and will cover more food than Vermont’s groundbreaking GMO labeling law. . . .”

“These self-selected ‘good food’ and ‘organic’ leaders have been telling Congress behind closed doors—and now publicly—that they and the organic community will accept an industry-crafted DARK Act ‘compromise’—the Stabenow-Roberts bill—that eliminates mandatory GMO labeling and preempts the Vermont law with a convoluted and deceptive federal regime for QR codes and 1-800 numbers that is completely voluntary, with no firm guidelines for implementation, and no provisions whatsoever for enforcement. Perhaps even more outrageous, the legal definition of ‘bioengineered’ foods under the new DARK Act means that 95% of the current GMO-tainted foods on the market, including foods made from Roundupresistant and BT-spliced corn and soy, would never have to be identified.”

QR codes refer to the little black-and-white images that store data on corporations or products, which mobile phones can read.

While the battle in the Senate may be lost, we can still tell our representatives in the House we do not want the DARK Act compromise.

Ideally, GMOs would have been banned outright. It speaks to our American corporatist system that we, as Americans, aren’t even allowed rudimentary labeling of GMOs, which many first-world Europeans and others have.

Americans may have no choice but to grow and source locally known foods, free of Frankenfoods and chemical assault.