Under a plan being promoted by Senate Democrats to “protect” Americans from so-called disinformation, tech companies would be forced to ban dissident thoughts lest the companies be held liable. Numerous social media sites seem to be leading the way even before regulations are developed.

Senate Democrats have outlined a tyrannical plan for combating so-called fake news and purported “foreign meddling” in America’s electoral process in a recently circulated memo calling for tougher regulation of the tech industry.

Sen. Mark Warner (Va.), a top Democrat on the Senate Intelligence Committee, released a memo that was recently obtained by “Axios,” a media outlet founded by a group of reporters formerly connected to Washington daily newspaper Politico, which offered recommendations to the government for combating disinformation, fake news, and other supposed problems posed by the rise of social media and large tech companies.

The paper also recommends that media platforms be held legally liable for “defamation, invasion of privacy, false light, and public disclosure of private facts” on their platform.

“The size and reach of these platforms demand that we ensure proper oversight, transparency and effective management of technologies that in large measure undergird our social lives, our economy, and our politics,” the paper argues. “The hope is that the ideas enclosed here stir the pot and spark a wider discussion—among policymakers, stakeholders, and civil society groups—on the appropriate trajectory of technology policy in the coming years.”

The release of the controversial memo comes as a number of conservative and independent media outlets face increasing levels of censorship by some of the largest tech companies operating today. American Free Press has certainly taken repeated hits from tech companies as well as banking giants going after AFP’s sales on the Internet. Many extreme right-wing websites, such as the “Daily Stormer,” as well as leading figures in the alt-right movement, such as Richard Spencer, have felt the tyrannical effects of online censorship and de-platforming.

Now, under pressure from a variety of subversive lobbying organizations, left-wing agitators, and even large corporations, some of the world’s leading tech firms and social media platforms have outright censored Alex Jones and his popular “InfoWars” media outlet.

Earlier this week, YouTube, Facebook, and Apple announced they were removing content related to Alex Jones and “InfoWars” from their platforms for so-called “hate speech” and other alleged violations of the platforms’ terms of service.

Additionally, libertarian and anti-war activists, including Scott Horton, the editorial director of “AntiWar.com,” and Daniel McAdams, the director of the Ron Paul Institute, had their Twitter accounts suspended.

Critics argue that tech giants have unfairly targeted conservatives and other right-leaning commentators and independent media outlets, though some left-wing groups and individuals have been hit hard as well.

In a powerful op-ed published by Fox News, Nigel Farage argued that the recent censorship of Jones “represents a concerted effort of proscription and censorship that could just as soon see any of us confined to the dustbin of social media history.”

“These platforms that claim to be ‘open’ and in favor of ‘free speech’ are now routinely targeting—whether by human intervention or not—the views and expressions of conservatives and anti-globalists,” the former British politician and leader of the UK Independence Party argued.

Meanwhile, The New York Times reaffirmed its support for a newly hired editorial board member with a long history of extreme anti-white statements posted to the Internet, which were recently exposed by social media users following the announcement of her hiring. Sarah Jeong, a technology reporter, was recently promoted to the Times’s editorial board. Her ugly social media posts, which denigrated and targeted white people specifically, are apparently acceptable to not only her employer but also the very same social media platforms shutting down and censoring conservatives for alleged “hate speech.”

Many have called on President Trump to act to ensure large social media outlets do not unfairly target their political opponents, which is clearly the intention of many of these companies. 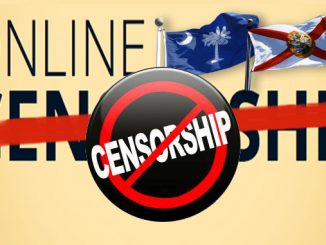