Mark Crispin Miller, a New York University (NYU) professor, did something out of the ordinary in contemporary universities—he asked his students to research a relevant topic, and he expected them to formulate their own conclusions. For this, and because the topic at hand was the efficacy of coronavirus masking, Miller is under fire at NYU, as one of his students has demanded his firing.

Miller teaches a class called “Mass Persuasion and Propaganda,” the purpose of which is to teach students to recognize the many ways in which persuasion and propaganda permeate today’s mainstream mass media. Miller is a well-respected expert in media bias and propaganda, but he has also been criticized by colleagues for dissenting from the mainstream media in the cases of the JFK assassination, 9/11, transgenderism, and vaccinations.

After assigning the masking research paper to his class in September, student Julia Jackson took to Twitter to rail against Miller. Her “tenured professor spent an entire class period telling students that wearing masks doesn’t prevent the spread of Covid-19,” Jackson tweeted, “and that hydroxychloroquine trials were made to fail so more people would be given the vaccine and have their DNA changed.” Jackson had also placed a call to NYU’s “Bias Hotline,” which is supposed to be used to report serious cases of racial, sexual or gender discrimination.

Miller made it a point to reiterate that he was not advising his students to rebel against the school’s guidelines for masking or those of the state of New York. What he had hoped to do was to engage the students in a learning process about a controversial issue of the day: masking. The idea of a “Mass Persuasion and Propaganda” course is to encourage the students to question authoritative stances and learn by doing their own research. Miller has stated that Jackson missed the first few classes of the course, days when he explained the purpose of propaganda and how throughout the semester, the students would be asked to question it in their own lives and in their own culture.

Miller was on this writer’s “Midnight Writer News Show” podcast to discuss the controversy and explained the situation further.

“I teach a course on propaganda,” Miller told this writer. “We necessarily study propaganda drives that are ongoing at the time. My view is that if you study propaganda as some kind of remote or abstract thing, if you focus only on the Soviets or the Nazis, you’re not actually studying propaganda. I don’t see it as an academic subject; I see it as a necessary practice for the citizens of a democracy. It would be absurd and irrelevant not to talk about propaganda drives that are ongoing or very recent that the students have lived through or are living through now.”

Miller emphasizes that propaganda is an intellectually difficult topic because propaganda wants no argument. It depends on censorship for its survival. To study propaganda properly, people must move outside their comfort zone.

“The most effective propaganda is the propaganda that we agree with and that we don’t see as propaganda, but as the truth, as the news, as the expertise of health officials,” Miller said.

Miller confirmed that Jackson did not raise any questions about the assignment or about masking while in the classroom. It is common in a college course for a student to question his or her professor, even to partake in a lively debate. It is also common for a student to leave the classroom, research the topic, and return to the next class day ready to debate the professor. This is part of the educational process, yet this is not what Jackson did. She instead took to Twitter to voice her complaints and demand Miller’s firing in a way that Miller defines as “malicious.”

Jackson is a student who deems herself a radical and supports Black Lives Matter, defunding police, and smashing capitalism. Yet, she demanded Miller’s termination because she was outraged by the very notion that her professor had the temerity to question national health officials. And rather than defending her own views in class, facing the teacher in an academic debate, she took to social media to vent her outrage on a forum with no responsibility.

This is not the only time Miller has been questioned by a university board. He was previously called in to defend his views on transgenderism. Miller has no qualms against transgender people, but he does question the practices of allowing biological men to enter into women’s sports, women’s shelters, and women’s prisons. He also questions the irreversible transgender surgeries that are now being done to some children.

“I have a serious problem with radical medical intervention in the sexual development of children,” Miller said. He also pointed out that the ideological transgender movement “has a lot of elite funding from Warren Buffet and George Soros.”

The charge against Miller on transgenderism was quickly dropped after he met once with the equity board.

Because even masking has now become political and tied to “Trumpism,” Miller has been called a “far right-wing conspiracy theorist.” That could not be further from the truth, as Miller has also authored The Bush Dyslexicon: Observations on a National Disorder, Cruel and Unusual: Bush/Cheney’s New World Order, and Fooled Again: How the Right Stole the 2004 Election. Like many Democrats (and some Republicans), Miller, in 2020, is a man who doesn’t recognize his half of the political aisle anymore.

Classrooms are a dangerous place in 2020. For asking the students of a propaganda class to question a mainstream narrative that affects them personally, Miller came under fire. It’s as if the worst thing a competent educator can do in a contemporary classroom is challenge the minds of students in a time when, as Miller stated, “higher education now seems to be teaching students how to take offense.” 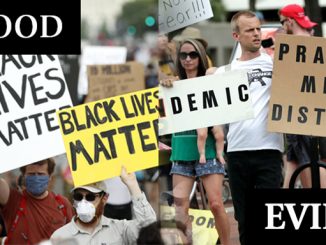