The front page story of American Free Press Issue 39&40 (subscribe here) asks whether the anonymous posts appearing on imageboard websites, attributed to “QAnon,” are actually from a patriotic individual or individuals within the Deep State working to expose corruption. Many believe that’s the case.

What if there were patriotic elements of the Deep State actively working behind the scenes to expose corruption and some of the worst crimes of the ruling elite in America? What if their end goal was to indict and arrest the top globalists that have ruled America for many decades? That is precisely what has been proposed in the “QAnon” conspiracy theory, which began in October 2017 on the anonymous imageboard “8chan,” and many Trump supporters believe it to be accurate.

QAnon consists of anonymous posts that have appeared on not only 8chan, but also other imageboard websites including “4chan” and “Reddit,” where users can post graphics, images, and other information anonymously. Many supporters of the QAnon movement have speculated that the anonymous posts are the work of a well-connected operative of the Deep State who is perhaps working for the National Security Agency (NSA), military intelligence, or some other federal agency. Some argue that multiple individuals have posted as QAnon. The mysterious movement has gained traction over the course of the past year and shows no signs of abating.

At the core of the QAnon movement is the belief that President Trump and his supporters in the Deep State—generally regarded as entirely hostile to the president and his agenda—are “secretly battling a corrupt Deep State and an evil cabal of pedophile Satan-worshiping elites,” according to a recent article published by The Washington Post. The mainstream mass media has consistently downplayed and ridiculed the QAnon movement, deriding its proponents as unhinged, irrational “conspiracy theorists,” but is there truth to the messages, narratives, and information posted by QAnon? More and more are starting to think so.

“I am 70% sold on QAnon, which is pretty good,” Mike King, an independent researcher and author who maintains the informative and hard-hitting “TomatoBubble” website, explained to this reporter recently. “President Eisenhower’s ‘warning’ about the military-industrial complex was in the context that he was worried about an uprising of rich businessmen and patriots in the military using their power and influence to combat the corrupt ruling elite. QAnon, I believe—emphasis on ‘believe,’ not ‘know’—may be that complex rising up in the form of NSA patriots, certain generals, and Trump.”

The NSA appears to be the main federal entity QAnon supporters believe is involved in the covert battle against the corrupt elements of the Deep State, which Trump and his supporters have long argued is openly subverting and undermining the president and his agenda at every opportunity available to them.

Project Veritas, a non-profit organization headed by James O’Keefe, whose mission is to “investigate and expose corruption, dishonesty, self-dealing, waste, fraud, and other misconduct in both public and private institutions in order to achieve a more ethical and transparent society,” has released undercover video footage of a State Department employee who is active with the radical leftwing group Democratic Socialists of America openly advocating resistance to Trump’s agenda and the federal government more generally.

The Deep State’s war against Trump and his agenda is hard to dismiss or ignore, especially when the hostile mainstream media appears to be working in conjunction with the Deep State to destabilize and undermine Trump’s America-first agenda.

King also believes the NSA is playing a key role in the QAnon movement and may be working to help expose the globalists behind the scenes.

“The NSA has dirt on everybody,” King stated. “I believe the Mueller investigation is a pretext for taking NSA evidence and ‘washing it’ so it can be used against the globalists. That’s the theory anyway, and it does seem very plausible. Mueller and so many others who have ‘flipped’ against Trump may actually be part of the greatest sting operation in history.”

Time will tell how true the QAnon postings and warnings actually are. Will the pro-Trump, patriotic elements of the Deep State, who have been using QAnon to release information and warnings to the American public, follow through and actually arrest the crooks and criminals working overtime to destabilize and undermine the Trump administration? 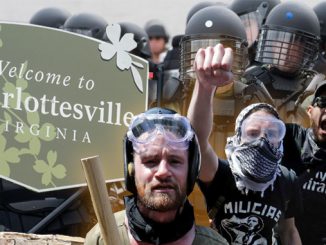 For the Record: They’re as Mad as Hatters

Doctors Kill More Than Covid-19 Could?

3 Comments on ‘QAnon’ for Real?