From 2017 and into 2020, American law enforcement officers have killed 2,855 civilians. Of those, 1,268 were white, 518 were black, 498 were Hispanic and 571 were “unknown” or “other.” It takes quite a leap of logic to draw from those numbers a mantra that “white cops are targeting black people for death,” given the fact that many of these shootings were carried out by black police officers.

The numbers should be compared to the startling prevalence of black-on-black crime. In 2015 alone, the last year complete data appear to be available, some 2,380 blacks were killed by other blacks. In many cases, the race of the perpetrator is not definitively known, so the actual figures are undoubtedly higher. Overall, blacks have accounted for over half of all homicide victims every year since 2010. The vast majority of them were killed not by police officers but by other black people. It is not racism to relay these statistics, but truthfulness.

The riots and protests occurring across this country have been portrayed in the state-controlled media as being exclusively about race, and more specifically, about “white privilege” and “white supremacists.” Regardless, the widespread looting, arson, and destruction of property have been overtly supported by left-wing journalists and politicians alike. Violent groups like Antifa and Black Lives Matter are front and center, literally stoking the flames.

The entire press went ballistic when Donald Trump posed in front of St. John’s Church—known historically as the “church of presidents,” while holding up a Bible. It was an identical pose, in the exact same spot, that Bill Clinton struck in a photograph several years ago. Police had fired tear gas in an effort to clear a crowd, so that Trump could walk freely to the church. While the president was castigated for this, little mention was made of the fact that he was posing in front of a church that had been damaged by protesters. Washington Bishop Mariann Budde reserved criticism for the president exclusively, dismissing the damage to the church as minimal, and calling Trump’s actions “an excruciating moment.” Budde also declared that Trump “is not entitled to use the symbolism to promote an entirely different message” from the protesting “people of color.”

There has, however, been virtually no criticism of those doing the looting, burning, and destroying of property by any media outside of Fox News. CNN anchor Don Lemon, who is basically an Antifa spokesman in the guise of a news anchor, replied to fellow “journalist” Chris Cuomo’s reference to “passion that fuels anger that fuels change.” He proclaimed:

After a while, people say, “Look, I’m tired of this. I’m tired of it, and either you let me in, you understand me. I’m gonna force my way into the conversation. Force my way into the system. I’m gonna demand that you let me into the house,” meaning—I’m talking about—you get what I’m saying, the metaphorical house. And you’re going to have to do it, and people aren’t going to like it. So, why can’t we all figure out how to do it now instead of an insurrection that happens because no one wants to change?

Showing that he was every bit as deluded, Cuomo editorialized against the civil disobedience of Henry David Thoreau, Mahatma Gandhi, and Martin Luther King Jr., declaring, “Please, show me where it says that protests are supposed to be polite and peaceful. Because I can show you that outraged citizens are what made the country what she is and led to any major milestone. This is not a tranquil time.” The First Amendment, of course, protects “the right of the people peaceably to assemble.”

Donald Trump Jr. responded to Cuomo on Twitter, mentioning the retired black former St. Louis police captain killed by protesters: “Here’s CNN’s Chris Cuomo carrying water for violent criminals burning down communities and saying that he doesn’t think protests are supposed to be ‘peaceful.’ Imagine saying that less than a day since Capt. David Dorn was killed in cold blood by looters?”

What should be focused on is just how many people of all races police have killed, and the number of those killings that appear unjustified to any reasonable mind. In contrast, consider that police in Norway haven’t killed a single person in over a decade.

Whatever comes out of these protests, on the heels of an unprecedented shutdown of the country, is not likely to be pretty. 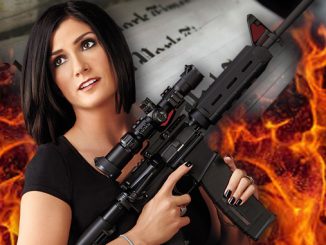 Why We Have the Second Amendment