When the Department of Defense report on UAPs (unidentified aerial phenomena) was released, every fringe group was looking for its own answers. The UFO/UAP research community was looking for the moment of disclosure that they’d worked a lifetime to affect, the skeptics were looking for rational explanations for the 144 unidentified flying objects mentioned by the Unidentified Aerial Phenomena Task Force, and those critical of government as a whole were looking for the ways in which the Department of Defense would parlay the issue of UFOs (or UAPs as they are called today) into a new trillion-dollar spending enterprise. The final report satisfied no one and asks more questions that it answers.

What we found out was that out of the 144 noted cases (2004-2021) of unidentified flying objects reported by military aircraft, the government can’t explain 143 of them. This, of course, only accounts for those noticed by military personnel. This does not take into account those spotted by commercial pilots, aviation hobbyists or astronomy enthusiasts. If those best trained to explain what they are seeing in the skies cannot explain 99.3% of what they have seen, questioning the origin and purpose of those 143 objects is worthwhile.

There was a hint of the pre-2021 explanation that still exists, the idea that the spotter didn’t really see what they thought they saw. “In a limited number of incidents,” the report said, “UAP reportedly appeared to exhibit unusual flight characteristics. These observations could be the result of sensor errors, spoofing, or observer misperception and require additional rigorous analysis.”

While the report does acknowledge that the government cannot explain some of the unidentified aerial phenomena, it does not state directly that any of the phenomena are necessarily extraterrestrial in origin. It does, however, directly state that the phenomena could be Russian or Chinese in origin.

If the aircraft are international in origin, as opposed to otherworldly in origin, that would pose an immediate national security threat. There was no explanation as to why the U.S. government, decades behind other foreign governments, still dismissed all accusations of UFOs until 2020. Any question or hint of such topics would produce laughter, semi-comedic quips, or allegations of bad eyesight and stray weather balloons. If there is reason to believe a national security threat is imminent, the U.S. has been the slowest, most aloof government at the table since the Roswell crash of July 1947.

If the phenomena are international and not just a popular reason for a new defense appropriations grab bag, then that would mean that Russia and China are potentially decades to centuries ahead of U.S. aviation advancements, at least in known advancements. And that is unlikely.

A senior U.S. official, answering questions about the UAP work that needed to come, said “We quite frankly have a bit of work yet to do in order to truly assess and address the threat posed by UAP.”

A “bit of work” means extensive and expensive government programs that will need to be funded via appropriations. The Office of the Director of National Intelligence and the Pentagon are working together to create a means by which they can standardize and assess reporting. John Kirby, the Pentagon’s press secretary, said the intelligence arms of the Pentagon are making that happen.

Be assured, too, that the work done at the Pentagon through its intelligence arms will be work that has bipartisan support. Senate Intelligence Committee Chairman Sen. Mark Warner (D-Va.) and the committee’s top Republican Marco Rubio (R-Fla.) both support moving forward. “The United States must be able to understand and mitigate threats to our pilots, whether they’re from drones or weather balloons or adversary intelligence capabilities,” Warner said.

Rubio added that this will be a long, arduous process. “This report is an important first step in cataloging these incidents, but it is just a first step. The Defense Department and intelligence community have a lot of work to do before we can actually understand whether these aerial threats present a serious national security concern.”

Rep. Adam Schiff (D-Calif.), House Intelligence Committee chairman, said, “We should approach these questions without preconceptions to encourage a thorough, systematized analysis of the potential national security and flight safety risks posed by unidentified aerial phenomena, whether they are the result of a foreign adversary, atmospheric or other aerial phenomena, space debris or something else entirely.”

There is a persisting theory out there that this was either a shell game or a tepid release. Annie Jacobsen, author of Area 51: An Uncensored History of America’s Top Secret Military Base, tweeted: 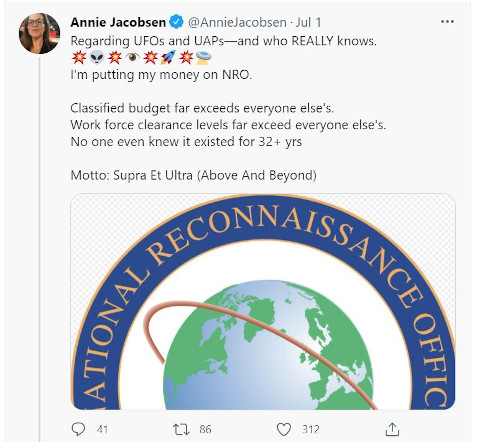 Regarding UFOs and UAPs—and who really knows. I’m putting my money on NRO [National Reconnaissance Office]. Classified budget far exceeds everyone else’s. Work force clearance levels far exceed everyone else’s. No one even knew it existed for 32+ years. Motto: Supra et Ultra (Above and Beyond).

If the NRO has the most information and the DNI has limited information, then the study emanated from the wrong office, and potentially on purpose.

It may be that the government is genuine and acting on the level in this UFO report. It may be that time. It may be a foreign aviation threat. Some sightings may still be extraterrestrial. Further study may be justified whether foreign or extraterrestrial. The skepticism that is coming now from all perspectives stems from the idea that the U.S. government has been an untrustworthy, dishonest actor in the field since 1947, going so far as to ruin the academic reputations of those scientists with a keen interest in ufology. The truth, to the extent to which it can be proven, may be in the recently released report. But officials will have to forgive Americans if they continue to look upon its releases with jaundiced eyes. More is coming.