Former FBI Director James Comey has provided his testimony to the Senate Intelligence Committee, breathlessly awaited by the mainstream media, sure he would reveal some damning evidence of obstruction of justice by someone—anyone—in the Trump Administration. Not so. Now, perhaps we can at last collectively turn our attention to some of the myriad issues that warrant it.

Former National Security Advisor Mike Flynn was fired after it was revealed that he had not fully disclosed to then-Vice President-Elect Mike Pence the details of Flynn’s Dec. 29, 2016 conversation with Russian Ambassador Sergey Kislyak.

The only reason it had even come up was because the fact that the conversation had occurred was illegally leaked, presumably by a government official with access to an intercept of the conversation. It was published by The Washington Post on Jan. 12.

Flynn briefed Pence on the conversation, who then appeared Jan. 15 on CBS’s “Face the Nation” and stated that Flynn and Kislyak had not discussed sanctions that were imposed on Russia.

Next, the contents of the conversation were leaked, presumably by a government official, on Feb. 9, again to The Washington Post. According to that report, as it turned out, “National security adviser Michael Flynn privately discussed U.S. sanctions against Russia with that country’s ambassador to the United States during the month before President Trump took office . . ..”

So, three things happened, if the reports are true: 1) Mike Flynn talked with Kislyak, 2) sanctions came up in the conversation, and 3) Flynn did not fully disclose the details of the conversation to Pence, who then appeared on television, mischaracterizing what had been discussed.

If that’s all there is and was, then no crime was committed by Flynn—not by talking to Kislyak, not by discussing foreign policy issues that were likely to come up during the Trump administration, including sanctions, and not when he allegedly failed to fully brief Pence, who was not yet vice president. None of those things are crimes.

Four days later, on Feb. 13, Flynn resigned his position as National Security Advisor, the first victim of the surveillance state unmasking of American citizens from raw intelligence gathered by the outgoing Obama administration.

Again, the only reason it came up was because of the felony disclosure of Flynn’s conversation with Kislyak to the Post on Jan. 12. Had that never happened, Flynn might still be National Security Advisor.

This is the context that must be understood as the nation now considers the pre-released testimony of former FBI Director James Comey before the Senate Intelligence Committee on June 8, which states of his Feb. 14 meeting with President Donald Trump:

When the door by the grandfather clock closed, and we were alone, the President began by saying, “I want to talk about Mike Flynn.” Flynn had resigned the previous day. The President began by saying Flynn hadn’t done anything wrong in speaking with the Russians, but he had to let him go because he had misled the Vice President. He added that he had other concerns about Flynn, which he did not then specify. The President then made a long series of comments about the problem with leaks of classified information—a concern I shared and still share. After he had spoken for a few minutes about leaks, Reince Priebus leaned in through the door by the grandfather clock and I could see a group of people waiting behind him. The President waved at him to close the door, saying he would be done shortly. The door closed. The President then returned to the topic of Mike Flynn, saying, “He is a good guy and has been through a lot.” He repeated that Flynn hadn’t done anything wrong on his calls with the Russians, but had misled the Vice President. He then said, “I hope you can see your way clear to letting this go, to letting Flynn go. He is a good guy. I hope you can let this go.” I replied only that “he is a good guy.”

This is of critical importance. Providing fuller context to President Trump’s comments to Comey on Feb. 14, he did not think Flynn had committed any crime by talking with the Russians or misleading Pence about whether sanctions were discussed.

So, if there was no criminal matter for the FBI to attend to pursuant to Flynn’s conversation, then there was nothing to investigate. Hoping that Comey would come to the same conclusion in the independent exercise of his own authority is not obstruction of justice, as Democrats are now alleging. It is simply an interpretation of the law—which Trump under the Constitution has the Article II power and duty to enforce.

Note how Trump was extremely concerned about the leaks of classified information. That is absolutely connected to the Flynn matter. Again, the only reason any of this happened was because Flynn’s conversation with Kislyak was illegally leaked to the Post. It’s the only true crime that was committed here.

The unmasking of Flynn was the crime Trump thought Comey ought to be investigating. It’s a fair point, and he had every right to point this out to Comey. The Russia witch hunt is out of control—and apparently everyone in the country knows it except for those leading the investigation.

As National Review’s Andrew McCarthy has noted, even if Trump had ordered Comey to end the investigation into Flynn, that would still not be obstruction: “[It] cannot be doubted that a president has constitutional authority to order the FBI to drop a criminal investigation.” Why?

In other words, in the exercise of his constitutional authority to enforce the law, the president has the same prosecutorial discretion lower level prosecutors have—including prioritizing which crimes ought to be investigated.

Thus, even if a crime had been committed by Flynn—he hadn’t committed one, but let’s pretend he did—per McCarthy, “There are often good reasons for not pursuing a viable criminal case. Every day, throughout the country, the FBI forgoes various investigations and U.S. attorneys decline prosecutions.”

That is true. For example, it was Comey who, exercising his discretion, did not recommend criminal charges against Hillary Clinton to the Justice Department. Perhaps he just thought prosecuting the Democratic Party nominee for president would have torn the country in half. There was plenty of evidence she had broken the law by keeping classified information on her private server. Alas, he concluded no criminal statute had been broken.

As did then-President Barack Obama, opining on television on April 10, 2016—while the FBI’s criminal investigation into Clinton was still ongoing—that, “Hillary Clinton was an outstanding Secretary of State. She would never intentionally put America in any kind of jeopardy . . . She has not jeopardized national security. Now, what I’ve also said is that she’s acknowledged that there’s a carelessness in terms of managing emails that she has owned and she recognizes.”

Later, when Comey let Clinton off the hook on July 5, he used the same words, that Clinton had been “extremely careless.”

Per National Review’s McCarthy, again, “A cynic might say that Obama had clearly signaled to the FBI and the Justice Department that he did not want Mrs. Clinton to be charged with a crime, and that, with this not-so-subtle pressure in the air, the president’s subordinates dropped the case — exactly what Obama wanted, relying precisely on Obama’s stated rationale.”

Still, nobody at the time suggested Obama had obstructed justice by appearing on national television and giving his opinion about whether Clinton had committed any crime. Obama took pains to say: “I do not talk to the Attorney General about pending investigations. I do not talk to FBI directors about pending investigations. We have a strict line and have always maintained it.” Yet he apparently was not worried that then-Attorney General Loretta Lynch or then-FBI Director Comey might have been watching television at the time when he discussed the investigation into Clinton.

Not that it mattered all that much. Obama had every right, both as a First Amendment matter and an Article II matter, to offer his own interpretation that Clinton had not endangered national security or committed a crime by keeping classified information on her private server.

Just as Trump had every right to offer his interpretation that Flynn had not committed any crime by talking to Kislyak.

Love prosecutorial discretion or hate it—I’m personally not a fan but I recognized at the time that was why Clinton got off—that is the system of justice in which we live.

Indeed, if the President was concerned that Flynn’s troubles would not end with his firing—even though he committed no crime—he could pardon him if he wanted to prevent a severe miscarriage of justice, and it would be no crime. For, if Trump could pardon Flynn under Article II then he could audibly hope that Comey might save him the trouble. Many might disagree about such a political decision, and yet it is undeniable that the president could do so under his constitutional authority.

Which, perhaps, is the real problem here, where the president’s enemies still have not accepted the fact that he won the 2016 election—and so seek to deny him the legitimacy to execute the constitutional powers of his office. That is why, like the Flynn matter, Comey’s testimony is largely a distraction from the real issues facing the country.

Now that it is over, can we finally get back to work? 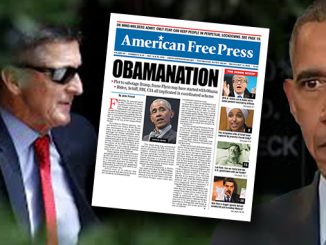