First There Was Churchill’s War . . .

And Now Possibly the Greatest Book Ever on WWII . . .

Establishment historians characterize National Socialist Germany as a uniquely barbaric, vile and criminal regime that was totally responsible for starting World War II and carrying out some of the most heinous war crimes in world history. Germany’s War by John Wear refutes this characterization of Germany, bringing history into accord with the facts.

Germany’s War documents that the Allied leaders of the Soviet Union, Great Britain and the United States were primarily responsible for starting and prolonging World War II—costing million of lives. Far from being the conqueror of Europe, Adolf Hitler saved it from Stalin.

The leaders of Great Britain and America also adopted policies designed to force war with Germany. Britain’s unconditional guarantee to Poland led to horrific acts of violence against Poland’s ethnic Germans and, thus, Germany was forced to invade Poland to end these atrocities. Franklin Roosevelt’s numerous provocations, including a shoot-on-sight policy against German shipping and leaked plans of a U.S. invasion of Germany, forced Germany to declare war on the U.S. despite Hitler’s desire for peace.

This book also reports the Allied mass murder of the German people after the end of World War II during which the Allies—led by General Dwight D. Eisenhower—murdered approximately 1.5 million German prisoners of war through intentional starvation and exposure to the elements. Probably a minimum 2.1 million ethnic Germans expelled from their homes also died in what was supposed to be an “orderly and humane” relocation. Finally, the Allies murdered millions of additional Germans through intentional starvation after the war ended—plus much, much more. 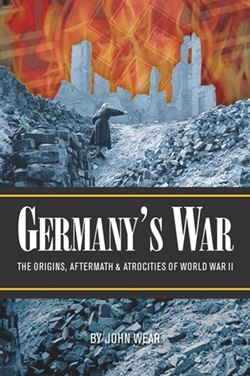 My father was a pilot in 50 bombing missions for the U.S. Eighth Air Force during World War II. When I was a boy I asked him if he had killed anyone during the war. He replied, “I hope I didn’t kill anyone.” In regard to his participation in the Normandy invasion, he said: “You cannot imagine how big of an operation that was. People on the ground were being killed!” My father repeatedly stated he hated war and that “War is hell.” He also expressed his opinion that the Germans had fought extraordinarily hard during the war.

I have always wondered how wars have continuously existed throughout history when virtually everyone agrees with my father that “War is hell.” In regard to the origin of World War II, a fascinating discussion occurred during the Nuremberg trials between American psychologist Dr. Gustave Gilbert and former German Reichsmarschall Hermann Goering. On the evening of April 18, 1946, in Goering’s jail cell, Dr. Gilbert expressed his belief that the common people are not very thankful for leaders who bring them war and destruction. Goering responded:

“Why, of course, the people don’t want war. Why would some poor slob on a farm want to risk his life in a war when the best that he can get out of it is to come back in one piece? Naturally, the common people don’t want war; neither in Russia nor in England nor in America, nor for that matter in Germany. That is understood. But, after all, it is the leaders of the country who determine the policy and it is always a simple matter to drag the people along, whether it is a democracy or a fascist dictatorship or a Parliament or a Communist dictatorship.”

Dr. Gilbert told Goering that there is one difference. Gilbert said:

“In a democracy the people have some say in the matter through their elected representatives, and in the United States only Congress can declare war.”

“Oh, that is all well and good, but, voice or no voice, the people can always be brought to the bidding of the leaders. That is easy. All you have to do is tell them they are being attacked and denounce the pacifists for lack of patriotism and exposing the country to danger. It works the same way in any country.”

12 Comments on GERMANY’S WAR: You Have to Read It to Believe It