As we pause today to reflect on the many reasons we have to be grateful, the editors and staff of AFP gives thanks for you, our readers, who support, challenge, encourage, and defend American Free Press. Since 2001 you have stood by us, and in this last year—a particularly challenging one, as Executive Editor Chris Petherick detailed in our last issue’s “Personal Message From the Editor”—you have made it possible for us to stand firm in the face of lies and attacks meant to take us down. Thank you!

The ability to laugh in the face of adversity is a valuable strength, and we’ve had plenty of opportunities to practice that ability this year! This column from S.T. Patrick offers us all a little chuckle.

Every American educated in a government or private elementary school remembers the Thanksgiving scene well.

It was taught to us as a moment of peace and harmony between the “savage natives” known as Indians—named as such because Christopher Columbus believed he had found the East Indies—and the Pilgrims, the religious independents roughing it for Christ.

Among the earliest of what became American traditions was the open mealtime prayer, the turkey, the corn on the cob, and the idea of gathering with your best friends and most bitter enemies alike to celebrate the holidays as one unified group. The Thanksgiving story is the perennial scene remembered from the Massachusetts Bay Colony.

Historians are still undecided as to the veracity of the tale detailing how Walmart offered a Black Friday DVD player for $5.99 the next day, yet there seems to be a general agreement amongst the learned that the Detroit Lions lost a game. While that’s a tongue-in-cheek historical recollection, the reality is that the Walmart and Detroit Lions scenarios are just as truthful as the Pilgrims and Indians story mimicked in many elementary schools on a dress-up day.

Myth and legend have permeated American history from the day the Pilgrims landed neither on Plymouth nor on any other rock. Columbus discovered zero of the 50 American states. George Washington never chopped down a cherry tree and never admitted his misbegotten case of amateur logging to his father by humbly confessing that he “cannot tell a lie.”

Paul Revere never rode through Boston warning that the British were coming. In 1775, Bostonians were British subjects and thus British, after all. Townspeople would have responded, “We’re already here!” Revere was one of three “Midnight Riders,” yet in 1860 he became the only one to be immortalized in verse by Henry Wadsworth Longfellow. That is why we remember Revere more than William Dawes and Dr. Samuel Prescott, the two other Midnight Riders.

Both John F. Kennedy (Profiles in Courage, for which he won the Pulitzer Prize in 1957) and Barack Obama (Dreams of My Father and The Audacity of Hope) used un-credited ghostwriters to fully author the books that helped propel them to political-cultural stardom and cult-like hero worship among certain segments of the masses.

For much of the past century, textbook publishers have glossed over consequential individual decisions, populist trends, and real conflicts to present progressive moments of cultural unity.

The largest textbook conglomerates in America—Cengage, Houghton Mifflin, and McGraw-Hill—have led this fight to sanitize history. The History Channel, the Discovery Channel, and most history publications have followed. The ends (cultural harmony and social progress) have justified the means (inaccuracy and distortion).

Thanksgiving was made an official U.S. holiday in 1863 by President Abraham Lincoln, hoping it would build morale for northern troops fatigued by war. Many years had passed before Dixie viewed Thanksgiving as anything more than a northern conspiracy to push Yankee traditions south of the Mason-Dixon Line.

Thanksgiving is now legally celebrated in America on the fourth Thursday in November. President Franklin D. Roosevelt tinkered with the date by moving it up one week, but it was returned to its rightful place on the calendar two years later when FDR admitted that his micro-tinkering was once again unwanted and unneeded by Americans.

The contemporary idea of Thanksgiving—the one shared by Americans today—is relatively new in our history, yet it is an idea with arguable levels of value. There is some unity in our shared traditions, even when they are based on stories distant from the factual truth.

Truth, however, is important and should be told—even at times when it is most difficult, times when the telling of it at most shakes the foundations and at least causes irritated discomfort. For what is the country’s history if it is not worthy of a truthful retelling to the extent that it can be truthfully retold?

Liberals Are Waging War on Reality 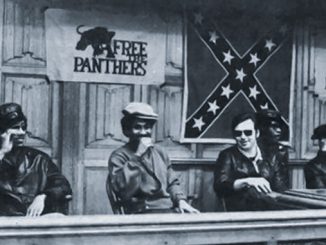 A History of the Original Rainbow Coalition