Activists want radical gender-confused curriculum to be standardized for all public school children.

Boosted by generous foundation funding and ultra-biased media propaganda, the homosexual movement—or LGBTQ as the acronym is known today—is on the march like never before and is allied with the nation’s largest teacher’s union to embed the entire LGBTQ “gospel” into America’s public schools—with an emphasis on no-holds-barred transgenderism.

To illustrate the seriousness of this issue, Jane Eden of the Idaho Eagle Forum told AFP for this exclusive that the National Education Association (NEA) is holding its annual national conference July 4-7 at Houston’s George Brown Convention Center. Its clear intention is enabling this Marxist-style revolution to stealthily enter the schools by prepping teachers and administrators, even while most parents are unaware of what’s happening. She said that children from as young as three years old up through grade 12 could be exposed to what would apparently be mandatory homosexual-transgender indoctrination with no allowance for opting out. So, there’s a growing call for parents and the greater public to get informed and get involved right away before the next school year begins.

Gender Inclusive Schools: NEA shall, using existing digital media, have all state and local affiliates encourage K-12 teachers to view a series of films called “Creating Gender Inclusive Schools” and use the accompanying study guides of the Youth and Gender Media Project (youthandgendermediaproject.org) to create inclusive communities for all youth, regardless of where they fall on the spectrum of gender identity and expression. . . .

The Youth and Gender Media Project (YGMP) is a nonprofit that works in conjunction with a nonprofit called Gender Spectrum. Meanwhile, the Arcus Foundation, with offices in Kalamazoo, Mich., New York City, and Cambridge, UK, provides funding for YGMP films, books etc. Gender Spectrum publishes materials such as books, study guides, and training manuals. Notably, Jon Stryker, an openly gay licensed architect and billionaire, whose family is of Stryker hospital-equipment fame, heads the Arcus Foundation. And Gender Spectrum’s long list of clients and partners includes Girl Scouts USA and the Michigan Department of Education, as well as the Anti- Defamation League and the American Civil Liberties Union.

Our films introduce profoundly new concepts, like the idea that even a young child can be transgender, and the new and still rare use of hormone blockers to delay puberty. Universal themes like family acceptance, being true to one’s self, coming of age, the power of community, and the importance of tolerance and love make these films accessible and deeply moving. . . . “Becoming Johanna” tells the story of a 16-year-old transgender Latina living in Los Angeles, who is taken into foster care when her religious, immigrant mother refuses to accept her transition to a young woman. “Creating Gender Inclusive Schools” provides a behind-the-scenes look at a public elementary school that trains their entire school community—students, teachers, parents, and staff—about gender, inclusion, stereotyping, and bullying.

Notice the assumption that it’s perfectly acceptable to remove the teen from the custody of the “religious, immigrant [presumably Catholic] mother” just because the mother, who’s dismissed as narrow-minded with no apparent say in her child’s future, refuses to permit her son to become a woman—all so an obviously impressionable, vulnerable teen can be placed in the notoriously risky foster-care system. Notice, too, the suggestion, as is widely accepted in LGBTQ circles, that using hormone blockers to delay puberty—which carries considerable health risks—is something to be embraced as a means of giving teens extra time to decide their gender and possibly have their genitals altered in irreversible, highly risky sex-change surgery.

Yet, the NEA’s agenda (page 22, section 121) specifically opposes “conversion therapy” and calls it harmful to the LGBTQ community—conversion therapy, sometimes called reparative therapy, being a process where trained counselors help homosexuals and transgenders return to heterosexuality and their original, natural biological gender. Ironically, it’s the LGBTQ movement that obsesses with deceptively converting people and is willing to promote surgery that some would call a desecration to attempt the conversion.

Add that to the following evidence of the movement targeting preschoolers and a recipe for major social upheaval becomes readily apparent.

“The book Who Are You? A Kid’s Guide to Gender Identity by Brook Pessin-Whedbee . . . is for three-year-olds,” Mrs. Eden informed AFP. “Kids [three years old] are told that gender is not just what you are born with, but that there is another meaning for gender, what you feel and like (dancing, nail polish, making things . . .), and that can change from day to day. There is an interactive wheel in the back cover of the book for the teacher to guide the child in finding their newly discovered gender: gender-queer, non-binary, gender- fluid, trans, transgender, agender, gender neutral, bigender, two-spirit, girl, boy, both, neither, and more.”

Boys Will Be Girls? 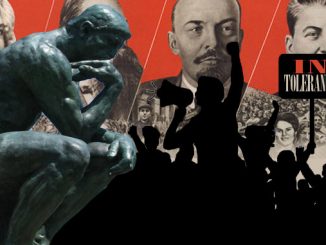 Best Ideals of Left Are Being Usurped

Confusing Time for Males and Females