President Donald Trump will be hosting Israeli Prime Minister Benjamin Netanyahu on Wednesday at the White House in a high-stakes meeting that could test their longstanding relationship given Trump’s recent criticism in the Israeli press of unchecked Israeli land thefts and the construction of illegal Israeli settlements.

A meeting that’s set to take place on Feb. 15 between President Donald J. Trump and the prime minister of Israel, Benjamin “Bibi” Netanyahu, will set the stage for what a future Palestinian homeland will—or will not—look like. The two “are expected to discuss settlements, the potential to revive peace talks and the Iran nuclear deal, among other topics.” 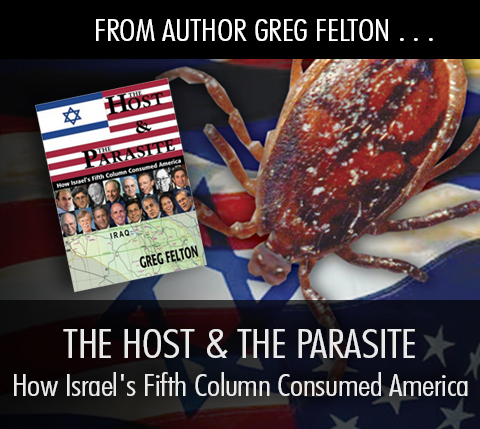 American Free Press sat down with author and analyst Greg Felton, whose book, The Host & the Parasite: How Israel’s Fifth Column Consumed America, is considered by many to be the definitive account of how the Israel lobby hijacked U.S. foreign policy in the Mideast.

After Netanyahu called Trump on Nov. 9, 2016, to congratulate him on his stunning electoral victory, the president-elect invited Israel’s leader “to meet with him in the United States at the earliest opportunity.”

“It’s going to be one of those meetings that is probably going to be very, very disturbing for anybody who hopes that Donald Trump will put an end to the abject Zionist sycophancy of all previous administrations,” said Felton.

United Nations Resolution 2334, which was adopted 44 days after the invitation, guaranteed that the meeting would be anything but typical.

On Dec. 23, 2016, the U.S. abstained from a vote on a UN Security Council resolution that condemned Israeli settlements, “the first resolution on settlements to pass in 36 years.”

To reverse the resolution “would require a follow-up vote that avoids a veto from the U.S., Britain, China, France or Russia—a highly unlikely scenario given the current stalemate in the Israeli-Palestinian peace process,” reported the Associated Press (AP). “Given the world’s widespread opposition to settlements,” continued AP, “the action will be almost impossible for anyone, including Trump, to reverse.”

The resolution stated “that the establishment by Israel of settlements in the Palestinian territory occupied since 1967, including East Jerusalem, has no legal validity and constitutes a flagrant violation under international law and a major obstacle to the achievement of the two-State solution and a just, lasting and comprehensive peace.”

“Loud applause erupted in the council chamber after U.S. Ambassador Samantha Power permitted the resolution to pass,” said the AP.

Netanyahu’s reprisals were almost instant. He recalled the Israeli ambassadors to New Zealand and Senegal and cancelled a planned January visit to Israel by a Senegalese official. To add insult to injury, he ended all Israeli aid programs to Senegal.

A Palestinian official “hailed the result as a ‘victory for the justice of the Palestinian cause.’ He said Trump’s choice was now between ‘international legitimacy’ or siding with ‘settlers and extremists,’” reported AP.

The resolution also states that Israel is violating “its legal obligations and responsibilities under the Fourth Geneva Convention relative to the Protection of Civilian Persons in Time of War.”

“Yeah, that’s true,” said Felton, “but this is not really news. Israel’s been violating the Geneva Convention since it started.”

Felton elaborated upon the significance of the resolution:

“The resolution itself is very important, as it affirms the legal basis for Palestinians’ existence and the essential criminality of Israel, but it doesn’t say anything that isn’t already well known. What is interesting about it—what makes it important—is that the U.S. abstained on it. Had it not done so, it would have legalized, legitimized, the expansion of Jewish settlements in to Palestinian land.”

Trump, for his part, has telegraphed that he will be much more sympathetic to Israel’s wishes on the settlement issue, and he made no mention during his presidential campaign regarding a Palestinian state, “a core policy objective of Democratic and Republican presidents over the past two decades.” He promised to move the U.S. Embassy to Jerusalem from Tel Aviv (he’s already back-tracking), which is sure to create more bloodshed, and he chose American-Jewish bankruptcy lawyer David Melech Friedman as ambassador to Israel, a donor and vociferous supporter of settlements.

AFP asked Felton how the Mideast peace process will be affected by Trump.

“Donald Trump and the Zionist community go back a long way,” he said. “His family married into a Jewish family and his son-in-law, Jared Kushner, is a pro-settlement Zionist. In fact, he is part owner, part financier, of a settlement in Israel. So here we have a settlement son-in-law and a president who nominated a settlement zealot [David Friedman] to be an ambassador to Israel. I don’t think there’s been a president who has been so enamored of an Israeli leader. All previous leaders of America have despised the Zionists for what they do to America, and they go through the ritual of being the subservient governor of the Empire, because that’s what they have to do to stay in power. But Trump is a little bit different. He is emotionally invested in Israel, and that is frightening for the world.”

Surprisingly, on Feb. 10, while speaking to the Hebrew-language newspaper Israel Hayom, Trump said settlements were an obstacle to peace.

“I am not somebody that believes that going forward with these settlements is a good thing for peace,” he told the paper. “Every time you take land for settlements, there is less land left.”

AFP asked Felton for his analysis on this move.

“Every president in the history of the United States since 1967 has condemned the Zionist expansion to Palestine,” Felton said, “and each president has been treated with gross disrespect by Israel. They have been actively ignored, insulted, denigrated, and humiliated. What makes Trump different is that he doesn’t care; he is on board with this and he is the first, I think, pro-settlement president in the history of the country. The fact that Trump is enthusiastically pro-settlement is of great concern.”

In fact, since Trump’s inauguration, “Netanyahu has announced more than 5,000 settlement homes, as well as the first new settlement for more than 20 years.

“Instead of a political arrangement between the Empire of Israel imposing its will on the United States,” continued Felton, “we’re gonna have a sycophantic American government actively enjoying its relationship with Israel. We’re gonna have Donald Trump isolate the United States ever more because of his refusal to uphold international law and behave like a responsible adult.”

Netanyahu is facing extreme pressure from the extremists in Israel.

Education Minister Naftali Bennett, the chair of the far-right Jewish Home Party, said “Trump’s victory meant the idea of a Palestinian state was over,” and has regularly called for the annexation of much of the West Bank.

On Feb. 11 he wrote on Facebook that the “meeting with Trump will be ‘the test of Netanyahu’s life’ and will determine Israel’s policy toward the Palestinians for years to come.” He warned “that if the two men mention an obligation to establish Palestine or two states in some or other iteration, we will all feel it in our flesh for years to come. It will be an earthquake.”

“One of the sad things of Israel is that the original Israelis—if you can call them that—behind the 1967 boundaries, are now a minority in the Knesset, Felton explained. “All power really rests with the rabid, psychopathic, East European settler community, and Bennett is part of that community. They want to commit mass murder. They want a Nazi holocaust against Palestine. Now, of course the Jewish ‘Holocaust’ in history is grossly exaggerated, and in fact misrepresented. According to the settler mentality, any respect, any acknowledgment of Palestine, even respect for Palestinian life is considered a blasphemy against their pseudo-religion. And so we have the settlers threatening, bizarrely, probably the most neo-fascist prime minister in history to be even crueler to Palestine, essentially blackmailing the prime minister.

“I would think that Netanyahu wouldn’t disavow [the two-state solution], because that would make him out to be a liar,” Felton continued. “He just stated support for the two-state solution—however vacuous that may be—then he has to admit that everything Israel has ever done has been a lie, and that will do more to give support to Palestine. Are Americans gonna stand by and watch a wholesale slaughter of civilians take place? Well, if the media doesn’t report, probably.”

Dave Gahary is a writer for AFP and lives in Florida.

4 Comments on Netanyahu Goes to Washington to Meet Trump