Richard Schickel, a 33-year veteran of the Internal Revenue Service (IRS), is back with a new book that gives away the revenuers’ secrets. Schickel sat down with AFP to discuss the book as well as detail the tactics the IRS uses to cajole, persuade, coerce, scare, and intimidate taxpayers in order to force them to incriminate themselves.

Richard M. Schickel is at it again. Fresh off the success of his first book, IRS Whistleblower: My 33 Years as an IRS Insider Will Show You the Secrets of How to Engage the IRS and Win, Richard’s latest, What to Do When the IRS Is After You: Secrets of the IRS as Revealed by Retired IRS Employees, is sure to have the IRS in a tizzy.

IRS Whistleblower confirmed what many AMERICAN FREE PRESS readers have long suspected: The revenue collecting arm of the Department of the Treasury is a rogue agency that rewards the aggressive collection of taxes, encourages violation of the due process clauses of the Fifth and 14th Amendments of the Constitution, and whose agents’ range is only limited by the amount of power each one cannot grab.

Now, Schickel shows the reader—step-by-step—how to deal with this unfortunate fact. After serving for 33 years at the hated agency, Schickel had had enough and decided to blow the whistle and dedicate his life to teaching others the ropes.

AMERICAN FREE PRESS conducted an exclusive interview with Schickel about his new book, and why it makes sense for just about every taxpayer to get a copy of it.

“I’ve always thought the tax code should be enforced the same way in New York and Chicago and Philadelphia and Los Angeles and even here in Tucson, Arizona,” he explained to this writer, “and I was just shocked with the discrimination I saw.”

Schickel explains in his new book that taxpayers will get tipped off that the IRS wants to get to know them better when they receive a letter in the U.S. Mail, which many are afraid to even open.

“Well, you have to open it, and if it’s certified, you usually get some appeal rights,” Schickel explained, “So,” he continued, “the only thing to fear is if you don’t open the letter.” 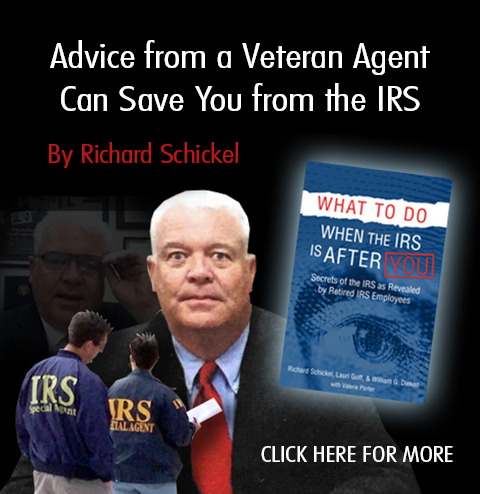 It’s especially important, Schickel explained, that the letter is opened up immediately due to several factors.

TAS, created in 1996, is an independent office within the IRS with around 2,000 employees tasked with helping taxpayers resolve their problems with the tax collection agency. To qualify, taxpayers must experience economic harm, significant cost or a delay of more than 30 days in resolving their tax issue, or have never received a response or resolution to the problem by the date promised by the IRS.

“It’s a valuable resource if you meet their criteria,” Schickel explained, “and I’ve always gotten help when I’ve gone there.”

Schickel explained a bit more of their internal affairs-type function.

“A lot of them don’t even seem to like the IRS at all,” he said. “They’ve seen what the IRS can do to people. It’s a really good operation.”

Schickel’s been getting quite a bit of attention since his first book hit the bookstore shelves, literally and figuratively.

“In the last month I got interviewed by The Wall Street Journal and The Washington Post about Donald Trump’s tax circumstances,” he revealed, where he told them maybe what they—and the rest of the corrupt mainstream media—did not want to hear.

“I told them that he probably doesn’t owe any taxes, because real estate developers rarely—or never—pay taxes until years down the road, but it’s perfectly legal,” he said.

This time around, it wasn’t just Schickel writing a book, as he was joined by two heavy hitters, William G. Dieken and Lauri Goff.

William was an IRS senior revenue agent for 34 years, who conducted field audits on businesses and individuals during that time, and Lauri was an IRS revenue agent who retired in 2015 after 34 years with the agency.

AFP asked Schickel why it makes sense for someone to get his new book.

“Even though I’m a tax professional, it’s still really hard to figure out which letter you have and what the implications are and what rights come along with it. And that’s me,” he explained. “For 36 years I’ve been doing this, and I still have trouble following the letters because they keep changing them, and they keep changing the rights and what’s listed there.”

Schickel concluded our interview by offering an important piece of advice for all taxpayers who get audited.

“Keep your mouth shut,” he said. “Don’t offer them anything that they didn’t specifically ask for. A lot of people will get into an audit situation and they’ll start volunteering things, and what was a simple, easy audit, all of a sudden becomes a big audit because you’ve told them too much about your life and your business.”

1 Comment on IRS Agent Reveals How to Handle Tax Man