The House Budget Committee, under Chairwoman Diane Black (R-Tenn.), has taken a strong first step toward reining in out-of-control federal spending by putting forward a budget that cuts $200 billion from “mandatory spending” over the next decade. It’s a start.

Sixty-nine percent of the $3.8 trillion federal budget consists of so-called “mandatory” spending. That is, $2.7 trillion of spending that occurs automatically whether or not Congress votes to adopt a budget or even pass a single appropriations bill—a constitutionally dubious process, but there it is.

This is the spending that occurs on autopilot, and tends to increase every year based on the population of people eligible to receive the benefits increases. This is why they are often called entitlements, because recipients are “entitled” to receive them under the law, although many readers might take exception to that term because they paid taxes into those programs. Fair enough.

But because it increases almost every year, it is refreshing then to finally see a proposal coming out of Congress that would cut other parts of it—without touching Social Security or Medicare that seniors depend on.

The House Budget Committee, led by Chairwoman Diane Black (R-Tenn.), has put a budget on the table that would actually cut so-called “mandatory” spending by $200 billion over the next decade off of the baseline. It actually started out as $150 billion of cuts, but another $50 billion was added to offset planned increases in defense spending.

Guess mandatory spending isn’t so mandatory after all.

It may seem comparatively small, a little less than 1% of the mandatory spending budget, but Chairwoman Black says it’s a start.

“I strongly believe that we need to begin to address mandatory spending and to change the culture of Washington with real reforms. This is an important first step that we can continue to build on in future Congresses,” Black said in an emailed statement.

It could add up. For example, if Congress found $200 billion of 10-year cuts every year out of mandatory spending, after five years, that would add up to $1 trillion of real savings over 15 years.

That’s still a ways to go to get to the $2.5 trillion of mandatory spending cuts proposed over the next decade in the Trump budget, but we’re making progress.

So far, it is not clear where the $200 billion of cuts will specifically fall, as House committee leaders hammer out the details. But, said Americans for Limited Government President Rick Manning, it’s a step in the right direction.

“We have to get the nation’s $20 trillion debt under control, and Congress’s part in that is clamping down on spending. The House’s constitutional role is to set the stage for the nation’s spending priorities. Chairwoman Black’s budget is doing what Congress is supposed to do, which is to set priorities and make choices,” Manning said.

Manning also called on Congress to build on the proposal, with even more cuts: “The only amendments that should be accepted to Chairwoman Black’s budget are additional deficit-reducing cuts.”

To which, there is a major incentive in Congress’s budget rules. The budget bill Chairwoman Black is working on is supposed to become the basis of the tax cut bill Republicans want to pass on budget reconciliation. Rightly or wrongly, tax cuts get counted toward the deficit by the bean counters at the Congressional Budget Office.

Just one more reason for the American people to root for more spending cuts in the budget as this legislation winds through the budget reconciliation process.

After the budget is signed into law by President Trump, don’t forget to thank Chairwoman Black when you get your tax refund next year. 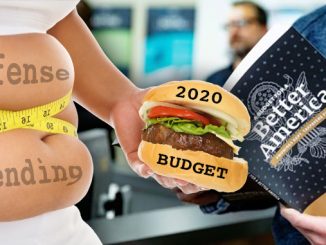