• Spokesman for “Stop Hillary” PAC says we need to be wary of Mrs. Clinton

According to the latest federal elections filings, Hillary Clinton has been able to amass $4M for a campaign war chest despite the fact that she has not even officially declared her candidacy for the 2016 presidential election. As a result, some pundits are already lining up to crown her queen. But a variety of groups have also formed with one specific goal in mind: to ensure that Mrs. Clinton never becomes president.

One of these organizations, Stop Hillary PAC, has issued the following admonition: “Today there is no more powerful, well-connected politician in America who threatens to do real harm to the American way of life than Hillary Clinton.”

On January 31, this reporter interviewed Garrett Marquis, spokesman for Stop Hillary PAC. When questioned about the potential dangers of another Clinton in the White House, Marquis replied: “History shows why we need to be wary of her. When it comes to scandals, whether ethical or legal, Hillary’s been either directly accused or been an accomplice in so many of them. She’s a political opportunist, and has been her entire life.”

In terms of Mrs. Clinton’s cozy relationship with Wall Street, Marquis pointed out: “It’s not surprising that she criticizes big banks one day and then receives $400,000 the next from Goldman Sachs. Hillary is a liberal elitist and has been ever since hustling her way into the White House.”

Marquis added: “We need to remember how Bill and Hillary sold the Lincoln bedroom to the highest bidder. She continues to sell herself out to whoever donates the most money. The PACs [political action committees] that support her have already collected millions of dollars.”

HILLARY (AND BILL) THE MURDER VOLUME 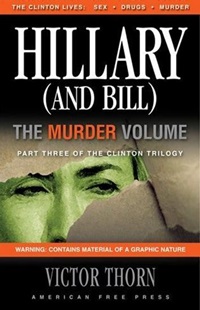 Is the “Clinton Body Count” real, or simply an urban legend—a product of far-flung conspiracy theory?

In Part Three of the Clinton trilogy—The Murder Volume—an overwhelming amount of evidence is provided proving that the 110+ people who’ve died under mysterious circumstances—all tied in some way, shape, or form to the Clintons—far surpasses any chance of it merely being coincidence. The odds of such a phenomenon occurring naturally are, in fact, so miniscule that alternative explanations become necessary.

Get all three volumes of Victor Thorn’s “Hillary & Bill” trilogy—over 1,000 pages of juicy information on the Clintons plus more than 3,000 sourced notes—for just $45—half price—while supply lasts.

Citing the infamous Clinton body count, Marquis addressed recent revelations about how Mrs. Clinton’s aides also compiled a numerical enemies list of Democrats who supported Obama instead of her in 2008. Topping this list was Secretary of State John Kerry, who the Clintons categorized as “treacherous.”

“It’s clear,” Marquis said, “that if anybody crosses her, Hillary wages a vendetta against them. I don’t want someone as president that writes down names of enemies and then takes them out.”

Obama officials may have unleashed Internal Revenue Service officials on political foes, but, Marquis said, “Hillary and Bill are even worse. They epitomize dirty politics. They have never worried about skirting ethical or moral boundaries to get what they want. They’ll keep using these same practices to deceive the American public about their actual goals.”

The Stop Hillary PAC has already filed a lawsuit against the PAC behind Mrs. Clinton.

“A superPAC named “Ready for Hillary” rented [Hillary] Clinton’s 2008 email list, which is a direct violation of FEC [Federal Election Commission] laws,” Marquis explained. “We intend to hold them accountable.”

On a closing note, Marquis issued another insightful observation. “Barack Obama and Hillary Clinton are linked through their policies, the liberal infrastructure, donors, and their ties to George Soros. But I have no doubt that when Hillary announces her candidacy, she’ll not only run against the GOP, but also Obama’s failures as a president, many of which she was part of.”

Victor Thorn is a hard-hitting researcher, journalist and author of over 40 books.