Hillary Clinton switches her politics more often than her hairstyles. Despite being worth over $100 million, Mrs. Clinton recently transformed herself into a populist, who understands Main Street America. During a May 16 speech at the New America Foundation, she blasted the robber barons of today, as well as the so-called shadow banking system that is responsible for saddling the country with trillions of dollars of debt.

On the surface, her words may satisfy those who put stock in her empty rhetoric. But the truth is, Mrs. Clinton is a political chameleon, who knows how to sell a crowd—whether it be union members or Wall Street’s wealthiest elites.

In actuality, Mrs. Clinton has never opposed the money trust. To the contrary, she and Bill collaborated with them every step of the way during their 40-year political careers. Since Mrs. Clinton left her post as secretary of state in 2013, she’s raked in over $5 million giving speeches to the likes of Goldman Sachs, the neocon-warmongering Carlyle Group and private equity fat cats from Kohlberg Kravis Roberts. Mrs. Clinton pocketed $400,000 just by giving two speeches at Goldman Sachs headquarters recently. 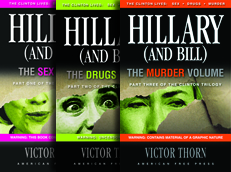 For more on Bill and Hillary’s dirty dealings, get copies of Victor Thorn’s books in the BILL (and HILLARY) trilogy from AFP’s bookstore. Click here to get the details.

When asked about the significance of Mrs. Clinton’s hobnobbing with the Wall Street banking elite, Morrow said: “Goldman Sachs has always been a key player at Bilderberg. In 1991 Bill Clinton attended a Bilderberg meeting in Baden-Baden, Germany. After receiving their approval, the following year he became president of the United States.”

Morrow added: “The Clintons turned their administration over to Wall Street cronies like Robert Rubin, Lawrence Summers and Roger Altman. Democrats have always enjoyed strong ties with investment bankers, and the Clintons are the biggest culprits of all.”

As the conversation turned to Mrs. Clinton, Morrow offered: “Hillary is a phony populist. The reason Wall Street invests in her boils down to influence peddling. They see the Clintons as Democratic royalty, who’ve always surrounded themselves with wealthy investment banker friends. Hillary has never deviated from being pro-Federal Reserve, pro-endless war and pro-big government.”

As recently as June 6, Mrs. Clinton attended a Goldman Sachs function in Manhattan under the guise of her Clinton Global Initiative.  This is not surprising given that in 2008 Citigroup and Goldman Sachs were Mrs. Clinton’s two largest campaign donors during her failed presidential bid.  On May 21, Rutgers University political scientist Ross K. Baker acknowledged this, saying, “[Hillary] is basically part of the Wall Street wing of the Democratic Party.”

Those who doubt this assessment should realize that in the seven years after the Clintons left the White House they epitomized the excess of the “One Percent” by amassing $109 million. Quite simply, these limousine liberals are more accustomed to backroom deals, insider trading, political patronage and dirty money than they are to the hardships of extended unemployment and feeding one’s children in a stagnant economy.

Considering that Wall Street has historically championed the war machine, investigative reporter Glenn Greenwald, who broke the Edward Snowden-NSA spy scandal, seethed with disdain at the thought of another Clinton presidency.  On May 12 Greenwald remarked:

“Hillary is banal, corrupted, drained of vibrancy and passion. I mean, she’s been around forever, the Clinton circle. She’s a fucking hawk and like a neocon, practically. She’s surrounded by all these sleazy money types who are just corrupting everything everywhere.”