Internet giant Google now says a popular Lutheran publisher’s faith-based advertising is bad for business. Concordia Publishing’s CEO explains that the company is standing firm: “We are not willing to sacrifice our beliefs to comply with Google’s requirements.”

Concordia Publishing House (CPH) is the publishing arm of the 2 million-member Lutheran Church-Missouri Synod, a conservative denomination that rejects ordaining women, abortion, and homosexual marriage. Founded in 1869, CPH is the oldest publishing company west of the Mississippi River and the world’s largest distinctly Lutheran publishing house. According to its website, it publishes “the world’s most widely circulated daily devotional resource,” printing and distributing over 850,000 copies quarterly, and its children’s books have been published in the millions of copies. But none of this matters to the world’s most visited website, Google.com, who has refused to do business with CPH.

CPH president and CEO Dr. Bruce G. Kintz explained in a Facebook post: “Google ads will no longer accept anything related to the cph.org domain. They stated the reason is because of the faith we express on our website. [A CPH associate] was told, as an example, that things like our Bible challenge on our [Vacation Bible School] webpage would clearly need to come down before they could consider us for ads.”

Google uses its AdWords division to bring in almost 100% of its revenue. It also owns censor-crazy YouTube, which has recently banned thousands of online videos on “controversial” topics like the “Holocaust” and school shootings, topics that have the potential of threatening the powers-that-be.

This newspaper’s website has been the target of YouTube’s censors, who took particular interest in audio interviews this reporter has done about the many anomalies of the Sandy Hook Elementary School shooting, which many believe did not unfold the way the government-mainstream-media complex has presented. In fact, AFP’s YouTube page has been scoured and purged of all interviews that present an alternative view of Sandy Hook. The most recent one removed simply discussed the results of a court case involving a parent of one of the victims and researcher Wolfgang Halbig, the school safety consultant at the center of the campaign to get more answers from government and school officials about what happened there.

Google, however, is itself not free from controversy. It is the target of criticism over “privacy concerns, tax avoidance, antitrust, censorship, and search neutrality.” Its mission statement, “to organize the world’s information and make it universally accessible and useful,” had as its unofficial slogan, “Don’t be evil,” which if it wasn’t so pathetically ironic might be funny. In 2015, “Don’t be evil” was replaced by “Do the right thing,” another laughable phrase.

Google informed CPH on April 23 that all the publishing house’s ads were “disabled due to a violation of Google’s policy for advertising based on interests and location.”

Specifically, the type of ads targeted are known as “remarketing” ads. As explained in a post on the CPH website, entitled “Concordia Publishing House Responds to Google Disabling of Faith-Based Advertising,” these type of “ads reach out to individuals who have made a decision to visit a CPH webpage. Google defines this as showing ads to people who’ve visited your website or used your mobile app. When people leave your website without buying anything, for example, remarketing helps you reconnect with them by showing relevant ads across their different devices.”

On its website, under the “Prohibited categories” heading, Google AdWords spells out what is verboten, which they consider “legally or culturally sensitive”:

The Internet is, primarily, a tool to get information and products, as is illustrated in the top 20 keywords that demand the highest costs per mouse click: “insurance; loans; mortgage; attorney; credit; lawyer; donate; degree; hosting; claim; conference call; trading; software; recovery; transfer; gas/electricity; classes; rehab; treatment; cord blood.” Keywords refers to words that are used most often in searches to find products or information.

After their ads were rejected, CPH contacted Google and was told “remarketing ads based on religious beliefs was not allowed.” CPH then requested a manager review this decision, which was denied, and were told the only way to bring the ads “into compliance” was to remove all “faith-based content.”

Soon after, a Google AdWords representative explained, “the disapproval resulted from the fact that the items in the ad and on the CPH website refer to Jesus and/or the Bible.” If CPH removed all references to Jesus or the Bible, their ads would be reinstated.

“[W]e are not willing to sacrifice our beliefs to comply with Google’s requirements,” he said in a statement. “It’s no secret that society is becoming increasingly hostile to the Christian faith. This increasing hostility makes our mission of proclaiming that faith through the books, Bibles, and curriculum that we produce all the more important. We will continue to proclaim the faith because we know without a doubt that the Word of the Lord endures forever.”

The way Google treated CPH is all the more incredible and disgusting knowing that in the U.S., the largest advertising market in the world, most Americans are exposed to around 4,000 to 10,000 advertisements each day, mostly revolving around the three Ss: sex, stocks, and sports.

Hey, Google! Let us see all the ads out there, and let us decide. Do the right thing. 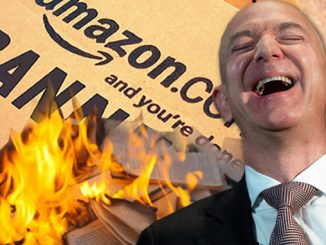