A new ad promoting Gillette razors exemplifies the radical left social justice mindset that has taken a firm hold on American culture. As is typical of commercials these days, the white males are portrayed negatively, with women and non-white males attempting to free them from their astounding incompetence and bad behavior.

The Gillette ad comes complete with a suitable title, “Believe.” Clearly referencing the #MeToo movement, the company has declared that men must hold each other “accountable.” The commercial was watched an incredible 2 million- plus times in the first 48 hours, and the response was decidedly negative, receiving only 23,000 “likes” and 214,000 “dislikes.”

In one scene, an absurdly over-the-top-lecherous white male with a Snidely Whiplash look on his face is reaching out to grab the backside of an African-American maid. The faces of male “reason” in the ad were all black, attempting to hold back their misogynistic, bullying white counterparts.

Irate viewers commented that the ad was “feminist propaganda,” and one wrote, “In less than two minutes you managed to alienate your biggest sales group . . . .”

“Boycott Gillette” was quickly trending on Twitter, with untold numbers of former Gillette customers swearing off the brand’s products forever.

So far, Gillette, which is owned by Procter & Gamble, is refusing to apologize or back down. Gillette president Gary Coombe stated, “Effective immediately, Gillette will review all public-facing content against a set of defined standards meant to ensure we fully reflect the ideals of respect, accountability and role modelling in the ads we run, the images we publish to social media, the words we choose, and more.” In today’s corporate world, there are obviously agendas beyond profits.

The Gillette commercial is bad enough by itself, but, in today’s culture of political correctness run amok, the trouble keeps piling on.

In early January, the American Psychological Association, one of the governing bodies for U.S. psychologists, issued new guidelines for clinicians working with boys and men that suggest traditional masculinity is “psychologically harmful,” a pathology that should be discouraged in men and boys.

Ryon McDermott, a psychologist at the University of South Alabama, who helped draft the guidelines, stated, “What is gender in the 2010s? It’s no longer just this male-female binary . . . . If we can change men, we can change the world.”

So what kinds of masculine traits do these radical activists say are bad? Bizarrely, they claim that even a male characteristic like “competitiveness” leads to bad behavior and is something that should be discouraged, especially among boys.

“You would never know that maleness was ever synonymous with anything good, reading this report,” said American Enterprise Institute scholar and former ethics philosopher Christina Hoff Sommers, author of Who Stole Feminism? and The War Against Boys, among other titles, and cohost of the popular “Femsplainers” podcast. (See other article posted today, “Femsplainers Battle Radical Feminism.”)

Today, American television viewers are all too familiar with the goofy, clueless father (especially white fathers), whose wife utterly dominates him and whose children have zero respect for him. This weak, worthless stereo typical figure has supplanted the strong, dominant fathers in sitcoms decades ago, in programs like “Father Knows Best” and “Leave it to Beaver.”

Today’s commercials are even more poisonously anti-male. They all seem to meld into one: The white male, in particular, is dumpy and woefully ignorant with a face that cries out to be dominated. The woman is bright, competent, and very, very aggressive. The white male’s children roll their eyes in exasperation at him and can fool him without the slightest effort.

In a 2018 essay in The New York Times, Michael Ian Black wrote: “The past 50 years have redefined what it means to be female in America. Girls today are told that they can do anything, be anyone. They’ve absorbed the message: They’re outperforming boys in school at every level. But it isn’t just about performance. To be a girl today is to be the beneficiary of decades of conversation about the complexities of womanhood, its many forms and expressions. Boys, though, have been left behind. No commensurate movement has emerged to help them navigate toward a full expression of their gender. It’s no longer enough to ‘be a man’—we no longer even know what that means.”

It doesn’t take a sociologist to understand how damaging all of this can be to boys today. Is it any wonder that suicide among white males has skyrocketed in the past few years? 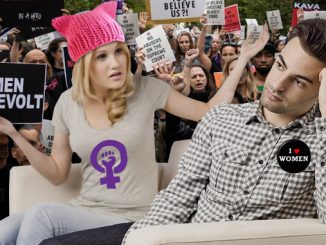