Each county school district in Florida may now choose to allow educational staff, including teachers, to be armed following specific training. Unfortunately, the state’s largest counties have already opted out of the program designed to protect kids.

In an expansion of a program that was launched in the wake of the Parkland, Fla. high school shooting in February 2018, both houses of the Florida state legislature have passed a law allowing full-time teachers to carry a firearm in Florida schools. A teacher will be allowed to carry a firearm on school grounds after they have successfully completed a 144-hour course on firearm operation and safety.

The “Guardian” program originated with an attempt by the legislature to ensure that all schools will have at least one armed staff member or law enforcement officer on campus during hours of operation. To pacify anti-gun activists, the legislature also installed a minimum three-day waiting period to purchase a firearm, as well as raising the legal age to purchase a rifle or shotgun from 18 to 21.

As expected, there are major disagreements about the practicalities of the new law. Supporters argue that on-site protection is needed, as law enforcement cannot properly respond to school shootings in time to stop the shooters and limit the number of victims. Detractors of the new law claim that accidental firings and stress-related incidents will be the unintended consequences, resulting in more injured students and employees than the firearms will save.

State Rep. Shevrin Jones (D) of Broward County at times screamed into the microphone during the heated debate on the Florida House floor. He imagined a real situation in a classroom where a teacher feels overwhelmed by an increasingly rowdy, crowded classroom. “What happens when that teacher feels threatened?” Jones asked. Jones also emphasized the ways in which he believes teachers of one race view students of another race. He then stated that teachers needed to be trained to address their own racial prejudices before arming themselves.

“There’s a reality that some of us have, that some of you in the front row couldn’t care less about,” Jones said, looking directly at the House Republican leadership. “I asked for implicit bias training because we’re talking about black boys and girls that are getting murdered by police officers! . . . There are bad police officers and there are bad teachers.”

Jones needs a reality check. Even The Wall Street Journal has reported that the supposed science behind claims of implicit bias where people are just unconsciously prejudiced is fake news. Dan Eagle, the House Republican leader, said of teachers who wish to take the course, “These are the individuals who want to protect you and others if they need to do so. When law enforcement can’t get there to save others, I hope there’s someone in that room who is able.”

Eagle pointed out the wide range of school safety provisions covered by the law, which also provides for increased mental health services, improved risk assessment, and a streamlined process for reporting incidents. Eagle called the Guardian program “a pathway” for teachers who want to be trained and armed, while pointing out that the bill is a wholistic one and not a way to arm every teacher in Florida.

Fedrick Ingram, president of the Florida Education Association, pointed out valid questions that school districts should answer in the process of adapting the law to their schools: “Will teachers wear guns, or how will firearms be stored? Will parents and students be told if the teacher in any given classroom is armed? Can parents opt their kids out of a class where the teacher is carrying?” These are questions that will have to be answered so that students feel safe in Florida classrooms. 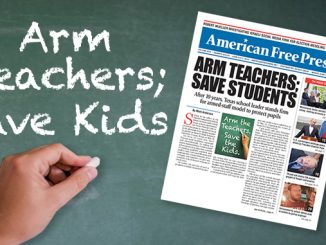