After 10 years of success, one Texas school superintendent stands firmly in support of his armed-staff model to protect pupils. While the media and other school professionals contacted him previously, he’s surprised to have not have received calls after the recent Santa Fe, Texas shooting.

Sitting in his office at the Harrold Independent School District in rural north-central Texas, school superintendent David Thweatt half expected the phone to ring off the hook in the aftermath of yet another murder by gunfire at Santa Fe High School in Galveston County, Texas on May 18.

It’s been 10 years now since Thweatt made headlines, nationally and internationally, by taking the lead in implementing a “controversial” school-protection plan that consists of training qualified teachers and staff to carry concealed firearms and maintain the crucial elements of uncertainty and surprise—to give any would-be school shooter reasons to think twice.

Of course, the success of such a program is mainly measured by simply noting that no one carrying a firearm with criminal intent has tried to enter or attack the district’s school facilities since Harrold’s school board approved Thweatt’s defense plan.

Contacted by AFP, he said he was a tad puzzled that AFP was the first and only media to have called him, as of May 21, regarding the events at Santa Fe’s high school.

“I got some calls after Parkland [the Florida school shooting in February 2018] and after Sandy Hook [December 2012 in Connecticut], but not after this one; it’s kind of weird,” he said, believing that calls from media and officials from other school districts would be more likely since Santa Fe is in his home state.

Thweatt’s school district implemented the armed-staff approach, now also being implemented in some Florida school districts, when the use of a firearm for murder in a school setting was considerably less frequent than it is today—meaning that he’s something of a pioneer in this area. While he’s modest about his role, he’s passionate about its purpose and effectiveness.

His views cut like a knife through the arguably flimsy suggestions for “roundtable discussions from all sides in the gun debate” and other politically correct measures called for by Texas Gov. Greg Abbott and most other officials. Only Texas Lt. Gov. Dan Patrick has been more specific, having recently said that the issue is “not about the guns, it’s about us. . . . We have devalued life, whether it’s through abortion, whether it’s the breakup of families, through violent movies, and particularly violent video games.”

But Thweatt, who has been well ahead of the curve in that regard, says that those who fixate on guns don’t believe in the Constitution—copies of which adorn the walls at his school.

For years, he’s been acutely aware that most media constantly place the blame on the existence and availability of firearms while downplaying or ignoring various corruptive factors that adversely affect the mentality and sociability of school pupils. That includes the regimented education system itself, which operates on the basis of what Thweatt generally calls “humanism”—an anti-Christian worldview which posits that human beings are an evolutionary accident of the universe whose lives have no meaning or moral foundation.

In addition, basic emotional and psychological problems, as well as broken, unsupervised homes and various other factors—far removed from firearms issues—all play a role in inducing uncivilized behavior, often aggravated by the use of psychotropic drugs that have been linked to a number of teenage “school shooters” over the years.

Thweatt remarked that much of the resistance to the Harrold district’s approach seems to stem from the basic fact that many people have bought into the notion that teachers cannot be trusted in such a role.

In the year prior to the Santa Fe shooting incident, the district’s leadership reportedly had made plans to protect its schools via the Texas School Marshal Plan, introduced and approved in 2013 in the state legislature. That model is based on arming external employees, tasked with defending schools.

After the May 18 shooting, the president of Santa Fe’s Board of Trustees stated that the district’s policies and procedures “worked,” and that it was not the failure of the procedures that accounted for the incident.

However, Thweatt told AFP there are some things the public needs to understand, considering that Santa Fe, like many school districts across the nation, has on-site campus police officers.

“Those officers are not for defense; they’re for dealing with kids who get rough with other kids—to protect kids from kids,” he said.

He added that while there are instances in which campus officers have provided some measure of defense, the problem is that they wear highly visible uniforms and external pistols, so any would-be school shooter can easily get familiar with the officers’ work patterns and locations as they come and go. Thweatt places much more confidence in his district’s model of non-uniformed internal staff using the concealed-carry approach.

Thweatt noted in passing that the Harrold district had approved ammunition that fragments when used, to minimize physical damage in the event of staff having to fire their weapons. But that policy has been changed to allow for standard rounds. 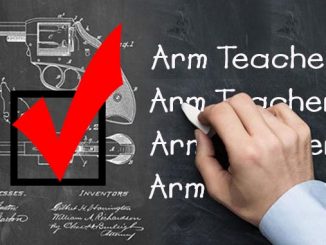 2 Comments on Arm Teachers; Save Students