Some say that artificial meats like the substitute manufactured by Impossible Foods for Burger King’s “impossible whopper” should not cause concern and that consuming them is by-and-large safe. Others, however, warn that the heavy soy content in the “veggie matter” that comprises the impossible whopper contains a whopping amount of the female hormone estrogen—which consumed in large quantities can make men grow “man boobs.”

This food fight over the impossible whopper became nationally apparent just before the new year when, on Dec. 26, 2019, The Washington Post criticized South Dakota veterinarian James Stangle, accusing him of bias in his recent article in the pro-beef industry trade journal Tri-State Livestock News, “Impossible burgers are made of what?” Stangle asserts that, all things considered, the substitute meat is a risky option for human health, especially men’s health, and that even the regular whopper’s “hormone implanted beef” is a better choice.

The Post—acting as if it has no bias of its own despite its heavy corporatist-globalist leanings—pooh-poohed Stangle’s views while portraying the issue as a stalemate.

“Whether [soy] is good, bad, or indifferent depends entirely on who you read and what you read,” New York University nutrition professor Marion Nestle was quoted as saying by the Post.

Nestle then suggested looking to cultures that have historically consumed soy products.

“Asians have been eating soy products for millennia and don’t seem to be any the worse for it. They have among the longest lifespans and best health, at least in classic diets,” she told the Post. “There is a special concern about . . . men and boys who eat soy products, but . . . they don’t grow breasts.”

But Weston A. Price Foundation President Sally Fallon Morell strongly disagrees. Noting the foundation’s considerable soy research, she explained: “Soy has 10 times more estrogen than the next-highest legume, which is peas. Asians have eaten soy for 1,000 years but not in large amounts. Traditionally, it’s been a condiment—two tablespoons for the Japanese and two teaspoons for the Chinese, and that’s in the context of a high-iodine diet that mitigated the thyroid-destroying effects of soy.”

While noting that Stangle’s estimate of 44 mg of soy in the impossible burger appears to be correct, she recalled a case where Illinois prisoners were fed a high-soy diet from 2003 to 2019 and many of the men developed breasts. “They called it chemical castration. A lot of them developed thyroid problems and horrible digestive problems,” she said, adding that the process of fermenting soy gets rid of digestive toxins but not estrogen.

And while soy sales have been slumping, she said, the impossible burger may be an attempt to juice up sales. The problem, though, is that the oddball Burger King offering is another means of getting people to consume what would otherwise be thrown away as a waste product, much like fluoride in public water.

“Soy protein isolate is a waste product from the soy oil industry and that’s what became the impossible burger,” Fallon Morell added. “Back in the 1970s, they figured out how to extract protein from the sludge that remains after they’ve pressed the oil out of the soybeans. The toxins are still there. [The products made from this] started with bacon bits, then fake sausages, and onward to a more real-looking burger.” 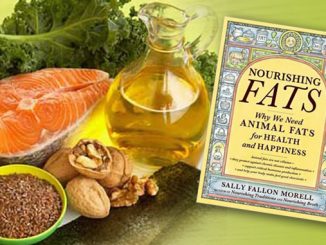 War Over Nutrition, Healthy Fats Quietly Rages Behind the Scenes as Americans’ Health Continues to Decline