Medical errors are the third leading cause of death in the United States, according to Dr. Martin A. Makary, a professor of surgery at Johns Hopkins University School of Medicine, whose study detailing death-by-mistake was recently published in The BMJ, formerly the British Medical Journal.

Alarmingly, 251,454 people die each year—nearly 700 a day—from preventable medical mistakes, accounting for 9.5% of all deaths annually in the U.S., according to The Washington Post.

Heart disease and cancer are the top two causes of death, responsible for 614,348 and 591,699 annual deaths respectively, and respiratory disease is the number four killer, causing 147,101 deaths per year. 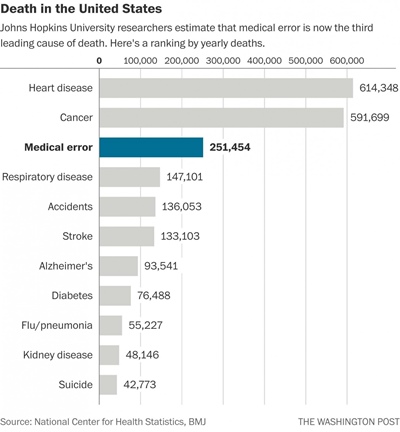 Makary told the Post for the May 3 article, “It boils down to people dying from the care that they receive rather than the disease for which they are seeking care.”

Mistakes are attributed to incompetence, communication breakdown, and bureaucratic bungling.

If dying from medical error isn’t bad enough, what may be more shocking is an estimate that serious injury caused by error may account for 40 times the number of deaths, according to Frederick van Pelt, a doctor with the Chartis Group, a healthcare consultancy firm, reported the Post.

If van Pelt’s estimation is near accurate, this means that more than 10 million Americans are seriously injured each year by medical errors. That’s a significant amount of misery visited upon a massive number of people.

What adds insult to injury is the high cost Americans pay for healthcare.

Healthcare costs were roughly $3.2 trillion in 2015, according to the federal Centers for Medicare and Medicaid Services (CMS). That’s about $10,000 per American, making up 17.5% of the nation’s gross domestic product.

Americans spend much more on healthcare compared to other first-world nations.

There are many reasons why Americans pay more—as much as 3.5 times more—than other first-world countries.

This is because the American healthcare regulatory scheme is neither “free market” nor “socialistic” but rather, monopolistic, allowing massive profits for a few with little competition or incentive to cut costs.

Those who think that America’s healthcare system is “free market” should take a sober look at the massive regulation that restricts market entry, including state licensure that limits the number of physicians and hospitals, the federal government’s drug and device approval process, and regulations on health insurance companies, especially those added in response to the Obamacare mandate guaranteeing that Americans buy health insurance.

One glaring example of monopolistic business practice involves the approval of drugs. The cost to bring a single drug from development to market in 2016 is a staggering $2.558 billion, according to the Tufts Center for the Study of Drug Development. Nonetheless, Big Pharma’s profits are astronomical. Pfizer, among the world’s largest pharmaceutical companies, made a huge 42% profit in 2013.

Only the secretive Federal Reserve System tops healthcare in terms of profit and privilege.

In America, most working people pay for “private” healthcare insurance, now a mandate under Obamacare, plus Medicare, also mandatory. This makes America exceptional in the sense that citizens are obligated to pay twice for allopathic care insurance premiums that enrich a few fat cats and provide make-work for a significant part of the employment sector.

Given that Americans pay much more than other high-income countries, one should be able to assume that at least we are healthier and living longer than our counterparts. Not a chance.

In almost every statistic, Americans live shorter and unhealthier lives than our counterparts, and this cuts among all racial, ethnic, and educational lines, according to a 2013 report by the National Research Council, the research arm of the National Academies of Sciences, Engineering, and Medicine.

Dr. Steven H. Woolf, the lead author of the report, told National Public Radio (NPR) in a January 9, 2013 interview, “What struck us—and it was quite sobering—was the recurring trend in which the U.S. seems to be slipping behind other high-income countries.”

Woolf also told NPR, “People with seemingly everything going for them still live shorter lives and have higher disease rates than people in other countries.”

The report noted, “The health disadvantage is pervasive—it affects all age groups up to age 75 and is observed for multiple diseases, biological and behavioral risk factors, and injuries.”

Is it any surprise the mainstream elite media, politicians, and pundits keep us in the dark regarding medical mistakes, let alone the larger picture of our bleak healthcare system, reflecting ill health from cradle to grave?

If you only listen to the controlled media, you’d think the chances are high you’re going to die at the hand of a Muslim terrorist. In reality, as of May 2016, overdoses on Tylenol have killed more people than Muslim terrorists in the U.S.

And while the left-wing-controlled media rants about gun violence, pointing to Chicago as an example of the need for gun control, that city’s gun violence problem is arguably tied to the illegal drug trade brought about by the prohibition of drugs.

The staggering problem of medical mistakes—251,454 deaths and 10 million serious injuries annually—should be at the forefront of our minds rather than Muslim terrorism or gun control.

How America got so unhealthy—from food to environmental assault to poor quality healthcare—should be explored to its fullest.