Despite cautions from members of both the House and Senate that spying by the NSA threatens Americans’ security and liberty, both houses of Congress reauthorized essentially unrestrained surveillance when they passed the FISA Amendments Reauthorization Act.

Section 702 of the Foreign Surveillance Authorization Act (FISA) was reauthorized Jan. 18 with a Senate vote of 65-34. Originally enacted in 2008, Section 702 provided the authorization for the warrantless surveillance program “that allows the NSA to collect texts and emails of foreigners abroad without an individualized warrant, even when they communicate with Americans in the U.S.,” explains The Hill.

The Senate vote followed an affirmative 256-164 vote in the House on Jan. 11 reauthorizing the law with only minor changes. The House rejected new restrictions proposed by Rep. Justin Amash (R-Mich.) on how the information gathered can be used.

Section 702 was set to expire as 2017 ended but was temporarily extended into mid-January, as proponents claimed letting it lapse would take the nation backwards in time, to the pre-9/11 days, when surveillance shortcomings helped enable the 9/11 attacks. Senate Majority Leader Mitch McConnell (R-Ky.) said the ability to continue spying on Americans is “essential” to national security and told his colleagues, “[W]e cannot let this capability lapse. The world remains dangerous.”

Urging senators to slow down and “consider the gravity of the issues at hand and to oppose reauthorization until we can have a real opportunity for debate and reform,” on the other hand, Sen. Martin Heinrich (D-N.M.) argued, “The American people deserve better than warrantless wiretapping.”

Sen. Rand Paul (R-Ky.) expressed his intent to filibuster the Senate vote on Section 702 but was shut down by a 60-38 cloture vote Jan. 16 to end debate and prevent Paul from stalling the vote. An online account at libertarian Reason magazine’s website explains the cloture vote also “prevent[ed] any amendments prior to a formal [up-or-down] vote on the FISA Amendments Reauthorization Act of 2017,” as the bill is formally named.

The act renews and expands “the snooping powers of Section 702 . . . for another six years,” Reason continues. “Though the law has the word ‘foreign’ in its name, the reality is that it has been used to collect and access communications from Americans, often without warrants and without our knowledge.”

Sens. Paul and Ron Wyden (D-Ore.) led a bipartisan group of senators who tried “to amend the bill so that it would require the FBI and National Security Agency (NSA) to get warrants in order to query or access any communications records (like emails or phone calls) from American citizens when [Americans] get drawn into international surveillance,” Reason notes.

Thus, a populist-style impulse entered the fray when Paul stepped forward to oppose Section 702 on principle. This is the kind of bipartisan cooperation that could, if sufficiently focused on essential goals such as turning away from the endless “war on terror,” foil the pro-Zionist war-on-terror stratagem espoused by the neoconservatives that long ago hijacked the conservative movement and placed them in strategic positions to carry forth such a war.

“This bill doesn’t just renew Section 702 for six years,” Reason added. “It also codifies permission for the FBI to access and use data secretly collected from Americans for a host of domestic federal crimes that have nothing to do with protecting America from foreign threats.”

Furthermore, what are known as “about” searches—accessing communications that merely reference a foreign target, not just communications to and from that target—are revived under the reauthorization. These types of searches were said to have been voluntarily ended by the NSA when it became clear that communications were being accessed outside of federal authority. Yet, reauthorization restarts these probes unless Congress acts separately to curtail them.

Arguing in favor of renewing Section 702, an editorial by the Heritage Foundation’s Hans von Spakovsky published at the neoconservative “FoxNews.com” states: “It is a violation of the law [under Section 702] to collect information from targets inside the U.S.—whether they are Americans or foreigners—or to deliberately target the online communications of American citizens.”

But in an official news release, Sen. Paul noted that due to a “backdoor loophole,” the bill “does nothing for the thousands of Americans whose private communications are searched without a warrant every year, including those who are not even the subject of an investigation.”

A “dear colleague” letter from Sens. Paul, Wyden, Mike Lee (R-Utah), and Patrick Leahy (D-Vt.) adds: “The so-called ‘warrant requirement’ reform in the bill applies only to criminal suspects, and then only to the government’s access to their information at the final stage of an investigation, a situation that, according to the most recent annual data from the Director of National Intelligence, has occurred once. This means that the bill actually treats those suspected of a crime better than innocent Americans.”

Sadly, these warnings went unheeded as both chambers of Congress voted to reauthorize essentially unrestrained NSA spying and all Americans’ Fourth Amendment liberties were further deteriorated. 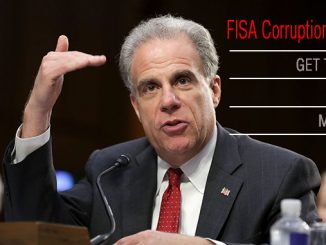