Even left-leaning television viewers have realized the charges against Trump were fake news, and ratings have taken a hit as more and more Americans turn off the mainstream media.

While the establishment left desperately awaited the release of the full report issued by special counsel Robert Mueller, in the hopes of an imaginary smoking gun being discovered, an increasing number of Americans are turning off mainstream media. Both CNN and MSNBC, the television networks most vociferously pushing the absurd Russian “collusion” theory, experienced their second lowest ratings of the year in early April, according to Nielsen research. CNN has fallen behind the likes of Home and Garden TV and children’s network Nickelodeon in daytime ratings.

MSNBC’s Rachel Maddow, perhaps the loudest voice in the state-run media howling about President Donald Trump conspiring with the Russians, lost half a million viewers just in the first week after the conclusions of the Mueller probe were reported. Her show has fallen an alarming 34% from the same point last year. Fox News, widely considered the television network fairest to Trump, has solidified its dominance in the ratings, and widened its lead on their more “liberal” counterparts throughout the Mueller investigation.

While mainstream television’s ratings are sinking rapidly, and establishment newspapers and magazines continue to go the way of the dinosaur, the public’s confidence in the press is dropping as well. A new poll by the Morning Consult revealed that, even among Democrats, faith in the biggest “liberal” media organs such The New York Times, NPR, CNN, NBC, and ABC dipped from July to December 2018, a time period when Russian “collusion” was front and center for all those outlets. The release of this poll came less than a month after Mueller’s probe concluded there was no evidence of collusion between the Trump campaign and Russia.

In September 2018, a joint Knight Foundation and Gallup Poll found that public trust in the mainstream media had fallen to an all-time low. A majority of those surveyed said they had lost faith in the media in recent years, with 30% reporting that they expected this loss of faith to be permanent. The Trump effect was obvious; when people were asked why they didn’t trust the media, 45% cited inaccuracy, bias, and “fake news.” In an earlier 2018 poll, it was revealed that among high-profile institutions, public trust in newspapers and television news was lower than for any except Congress. The gap between liberals and conservatives is immense here; recent polls have shown that while 51% of Democrats trust mass media, only 14% of Republicans do.

The mainstream media has certainly done nothing over the years to earn the public trust. In 1990, CNN featured a seemingly terrified reporter Charles Jaco, covering a scud missile attack live from Iraq. What would subsequently be revealed, through video leaked by CNN staffers, was the fact Jaco was on a sound stage, complete with fake palm trees in the background. He could be seen clowning around with staff members before the “attack,” during which he dramatically donned a gas mask. Since CNN never publicly acknowledged or apologized for this serious breach of journalistic ethics, is it any wonder they cavalierly dismiss the potential lawsuit against them by the family of young Nicholas Sandmann?

In a more recent example, longtime smiling pixie “journalist” Katie Couric was caught with her pants down, as producers used extremely deceptive editing in a 2016 documentary she narrated on gun control. Under the Gun featured what appeared to be speechless members of a Virginia gun rights group, who couldn’t provide a coherent response to Couric’s grilling about background checks. In fact, audio was later released that demonstrated these same “speechless” pro-gun advocates had explained their position coherently and thoroughly, but their words had simply been edited out.

Documentary producer Stephanie Soechtig issued a familiar justification, stating, “My intention was to provide a pause for the viewer to have a moment to consider this important question before presenting the facts on Americans’ opinions on background checks. I never intended to make anyone look bad and I apologize if anyone felt that way.” The multi-millionaire talking head Couric backed her up, saying, “I support Stephanie’s statement and am very proud of this film.”

During the media-driven Trayvon Martin case a few years back, MSNBC was caught editing audio tape between George Zimmerman and a police dispatcher, in an overt effort to turn innocuous conversation into something “racist.”

In addition to this kind of outright deception, mainstream media outlets continue to push impossible official narratives to explain every significant event that happens around the world.

The fawning, pro-establishment tilt of our mainstream media became more apparent than ever during the Mueller probe, as “journalists” abandoned all pretenses towards objectivity and openly demanded that “something be done” about Trump. Their crusade to get the full Mueller report released represents a sole exception to their historical support for the suppression of government documents from the public.

Donald Jeffries is a highly respected author and researcher whose work on the JFK, RFK and MLK assassinations and other high crimes of the Deep State has been read by millions of people across the world. Two of his books are carried by the AFP Online Store. 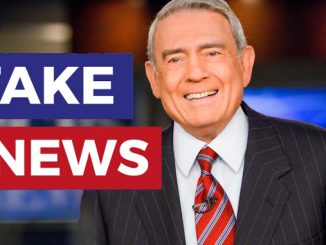 Rather Covers for Fake News Media