The saga of pedophile procurer to the rich and famous Jeffrey Epstein continues to enthrall, even if the Department of Justice appears to have no interest in learning the details of what appears to be a major Israeli spy operation. There have been a number of new developments in the past several weeks, confirming that Epstein had been a longtime Israeli intelligence asset targeting prominent Americans while also suggesting that he was murdered in his prison cell in New York rather than a suicide.

Of interest to many following the story with the apparent exception of the FBI, a former Israeli intelligence officer has written a book describing how Epstein and his partner in crime Ghislaine Maxwell were blackmailing prominent politicians on behalf of Israel’s foreign intelligence service Mossad. According to Ari Ben-Menashe, the two had been working directly for the Israeli government since the 1980s and their operation, which was funded by Mossad and also by prominent American Jews, was a classic “honey-trap” which used underage girls as bait to attract well-known politicians from around the world, a list that included Prince Andrew and Bill Clinton. The politicians would then be photographed and video recorded when they were in bed with the girls.

Ben-Menashe’s soon-to-be-released book Epstein: Dead Men Tell No Tales describes how Epstein was introduced to Maxwell originally by her father, Robert, a Czech-born British media tycoon, who was also a long-term Israeli agent. After his death, he was given a state funeral by Israel in which six serving and former heads of Israeli intelligence listened while Prime Minister Yitzhak Shamir eulogized: “He has done more for Israel than can today be said.”

Ben-Menashe was Robert Maxwell’s agent handler, meaning that he was the government intelligence officer who actually met with the high-level spy. Through Maxwell, Epstein also met prominent Israelis, including Ehud Barak, prime minister from 1999-2001, who had a business relationship with the American financier and occasionally visited the Epstein mansion in New York City.

To be sure Ben-Menashe, has something of a peculiar personal history due to his Mossad connection and he wants to sell his book, but no one has stated that he is wrong on his facts, even though his claims are largely unsubstantiated. And one might also add that last year’s hidden camera undercover exposés of Israeli agents working clandestinely to bring down unfriendly politicians and government officials in both Britain and the United States suggests that Israel is particularly aggressive in its influence operations.

One would have thought that the alleged ongoing investigation of Epstein would include a questioning of possible victims of the blackmail, to include Clinton, but there is no suggestion from anyone that that has actually taken place. And what about Ghislaine Maxwell, who was certainly complicit in the crimes against the girls who were used as well as regarding those who were later blackmailed?

Ghislaine, like Clinton, has never been asked to answer any questions about what she and Epstein were up to, though there is a Reuters report that she is being “investigated.” She has meanwhile been spotted in Los Angeles sipping a coffee at an open-air café. Most recently, the Jewish Telegraph Agency reports that “Ghislaine Maxwell, a British socialite who has been accused of helping late sex offender Jeffrey Epstein, is reportedly hiding out in Israel.”

A New York Post article confirms that Ghislaine sometimes travels to Britain on her UK passport but that she is currently in Israel “where her powerful contacts have provided her with safe houses and protection. Ghislaine is protected. . . . They would trade information about the powerful people caught in his net—caught at Epstein’s house.” Apart from her status as a Mossad asset and the protection it provides, generally speaking, Israel will not extradite any Jew who has been charged with a crime in another country, which is why so many Russian-Jewish organized crime figures have taken Israeli citizenship. So Ghislaine is unlikely ever to appear in an American courtroom.

And then there is the increased uncertainty about how Epstein died in jail. The authorities continue to claim it was suicide but one has to wonder how he managed to kill himself, if that is indeed the case, as he was reportedly on suicide watch at the prison and he should have been stripped of any clothing or cell furnishings that would have been usable to that end. So he is dead, but did he do it himself or was he helped? There are many prominent individuals and powerful government agencies that will be very pleased that he is gone, as most of his secrets will have gone to the grave with him.

There was certainly a warning that something might happen. Two weeks before his death, he was reportedly found unconscious in his jail cell with marks around his neck. It was suggested that he might have tried to kill himself or, alternatively, had been beaten up by another inmate. There was also considerable speculation that some aggrieved part of the Deep State was trying to assassinate him to silence him.

The recent release of a post-mortem in the jail as well as autopsy photos of Epstein on “60 Minutes” combined with the revelation that procedures in the prison were irregular have reopened the controversy over exactly how the convicted pedophile died with at least one more prominent pathologist saying that the images indicate that he was murdered, not a suicide.

The photos were reviewed by Dr. Michael Baden, a forensic pathologist and a former New York City medical examiner, who claimed that the evidence indicates that Epstein didn’t take his own life. Baden had been a witness at the original four-hour autopsy, and it was his judgement that the photos confirm that the fractures sustained by Epstein don’t suggest suicide. He also observed that the noose made from a bed sheet included in the photos of the autopsy report doesn’t appear to match the wound on Epstein’s throat because it would have created a wider “furrow mark.”

Baden also said, “There were fractures of the left, the right, thyroid cartilage and the left hyoid bone. I have never seen three fractures like this in a suicidal hanging. Sometimes there’s a fracture of the hyoid bone or a fracture of the thyroid cartilage. And going over a thousand jail hangings, suicides in the New York City state prisons over the past 40-50 years, no one had three fractures.”

Per Newsweek’s reporting of Dr. Baden’s analysis. “He also wondered why Epstein would fashion a noose out of bed linen when his cell contained a long electrical cord attached to a sleep apnea machine, [saying] ‘There were other wires and cords present that it would’ve been easy to use to hang oneself within a few minutes. . . . The forensic evidence released so far, including autopsy, point much more to murder and strangulation than the suicide and suicidal hanging.’”

And then there is always the big question which remains unanswered or even unasked. Conclusive evidence that Epstein was an Israeli intelligence agent might well be derived from the former U.S. Attorney in Miami Alexander Acosta’s comments when being later cleared by the Trump transition team. He was asked, “Is the Epstein case going to cause a problem [for confirmation hearings]? . . . Acosta testified that he’d had just one meeting on the Epstein case. He’d cut the non-prosecution deal with one of Epstein’s attorneys because he had ‘been told’ to back off, that Epstein was above his pay grade. ‘I was told Epstein belonged to intelligence and to leave it alone.’”

And then there is also the continuing mystery around Epstein’s possession of a genuine Austrian passport. How did he get it? Austrian passports are highly desirable in intelligence circles because the country is neutral and its holders can travel just about everywhere without a visa. 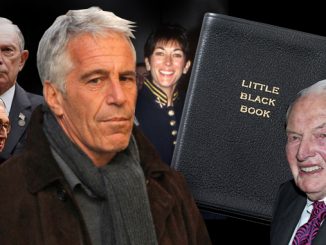