Israeli Prime Minister Benjamin Netanyahu’s recent offer to help Brazil put out massive fires in the Amazon came as he was starting his own bonfires in the Middle East where he has a history of promoting political arson. While the outreach to Brazil was designed to promote Israel as a nation interested in the environment— and to capitalize on Netanyahu’s close ties to the government there—Netanyahu was busy stoking fires of a different type in Syria and Lebanon. He threatened each country that if it retaliated against Israeli bombing and the deployment of swarms of drones armed with explosives against targets in their nation, they would face the full might of Israel’s military. Somewhat ironically, after attacking Lebanon, he told the Lebanese to calm down.

It was straight out of Netanyahu’s devious playbook. He has been busy for years attacking Hezbollah targets in Lebanon and Iranian facilities in Syria, with the aim of goading Hezbollah and Iran into a military response. Such a response, he is convinced, would then permit him to falsely claim Israel was under attack and that it had the right to retaliate as a matter of self-defense. His long-term aim has been war with Iran and Hezbollah, with the hope that it will draw in the U.S. In the past year, he has begun to feel more emboldened with support from U.S. neocons like Secretary of State Mike Pompeo.

Recent Israeli attacks in Beirut led Lebanese President Michel Aoun, a Maronite Christian, to declare that Netanyahu’s use of armed drones to target Lebanon was an act of war. Netanyahu got the response from Hezbollah that he wanted when its leader, Hassan Nasrallah, threatened that Hezbollah would retaliate for the killing of several of its men in a drone strike. Nasrallah warned Israeli troops on the border with Lebanon that they should be on alert. Netanyahu predictably responded that any threats and actions from Lebanon would be met with a massive military reply. It was classic Netanyahu.

Nevertheless, this was not a typical Netanyahu strategy. He has a grander motive for attacking Lebanon and Syria that was not apparent in coverage of the developing crisis in the international media and especially in U.S. mainstream media outlets, which reported the story as they have always done, that Israel was merely targeting its enemies, in particular Iranian proxies who pose a threat, even if no threat is apparent or imminent.

To understand the bigger picture, one often has to turn to foreign diplomatic and intelligence sources to get the inside track on what is really going on. This writer learned from talking to long-time sources that Netanyahu and his advisers have panicked ever since President Donald Trump began talking about the prospect of getting a deal with Iran. They fear the televised scenes that would accompany a possible face-to-face meeting between him and Iran’s President Rouhani. In an effort to stop this from ever happening, Netanyahu has decided to ramp up tensions in the Middle East with the aim of engaging Iran.

So far, Iran has not taken the bait, but who knows what Netanyahu may do should a summit between Trump and Rouhani become a reality? Israel is increasingly aware that some of the G7 leaders, especially French President Macron, recently pressed President Trump to employ the same strategy he has used with North Korea; in other words, engage Rouhani on a personal level.

There is, however, a back story to all this that has not made news. It is the role being played by the Saudis, who have been working secretly with Israel to prevent any U.S. political rapprochement with Iran.

This writer learned about the Saudi element of this crisis by reaching out to a long-time European intelligence source who wished to remain anonymous. The source spelled out the Saudi role and how it dovetailed with Israel’s policy.

According to the source, the Saudis and Israelis have a joint military-intelligence project underway to persuade Trump that Iran is the biggest threat to Middle East peace. Secret meetings have been held in Tel Aviv and Riyadh to plan joint operations against Iran, as well as against Iran’s allies in Syria and Lebanon. Netanyahu and the Saudi leader Mohammed bin Salman (MBS) have effectively forged a pact. This development worries the leaders of Russia, China, and some European nations since MBS is considered by European intelligence chiefs to be a dangerous wild card in the region and someone Netanyahu would not be able to control.

“This is not a positive development when it appears President Trump could deliver a deal with Iran that would calm the region and bring the Iranians into the Western fold,” the source added. “The prospect of it happening terrifies Netanyahu and MBS, though I suspect the Israeli people would be relieved to have Iran as an ally, not an enemy. You have to understand that with Netanyahu everything is about his ego. With MBS it is about his hatred of Shia Islam.”

For the first time in several years, there is a real possibility that there could be an historic meeting between Trump and his Iranian counterpart. It would be applauded by world leaders, and it might signal a new era in U.S. Middle East politics. But, with unseen forces opposed to peace, there is always the likelihood of war. 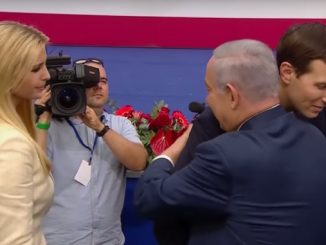 Kushner’s Plan for Palestine Is a Gift for Longtime Friend