NATIONAL HARBOR, Md.—A rift is developing between establishment-minded conservatives and dissident-right conservatives who consider the establishment types to be too afraid of losing money and prestige to make any genuine, lasting strides to prevent America’s dissolution. This became evident Feb. 28 when this writer attended both the American Conservative Union’s annual Conservative Political Action Conference (CPAC) and the first-ever America First Political Action Conference (AFPAC).

AFPAC’s speakers and attendees were comprised mainly of young nationalists. They derided CPAC as “Conservative Inc.,” portraying it as a pied piper that’s allegedly misleading its attendees with scare stories of creeping socialism—while scooting them away from what AFPAC’s presenters called “muscular nationalism” as well as genuine national sovereignty and border security.

“Conservative Inc. keeps people silent through suppression and fear”—fear of being kicked out of CPAC’s “big tent” via “character assassination,” among other tactics, Casey stated at AFPAC. Fuentes and the other speakers agreed that the National Review brand of “permissible conservatism” refuses to even critique or debate AFPAC’s positions while cavalierly comparing AFPAC to “the left,” simply because AFPAC wants far less military interventionism.

Ms. Malkin emphasized that the situation has gotten so bad that, while she used to be invited to speak at CPAC, she’s been banished from their confabs other than to cover the event as a reporter, which she did Feb. 28. She added that she has turned down a major Fox News contract and has departed the conventional-conservative reservation altogether. Her uncompromising views on nationalism and border defense are beyond what “Conservative Inc.” will stomach.

These presenters believe Conservative Inc. marginalizes them ultimately “because they know [we’re] right,” for example, about the profound demographic changes resulting from too much legal and illegal immigration. Other alleged journalistic “heroes” of the right, such as Charlie Kirk and Ben Shapiro, are seen as being controlled by high-dollar sponsors and thus too scared to challenge the conventional conservative status quo.

Casey, in introductory remarks, noted that it’s especially urgent for AFPAC to make the case for freedom and nationalism over despotism and internationalism because “the entire state apparatus has been weaponized against dissent—even against [President Trump].” The AFPAC presenters indicated they have faith that Trump is largely on their side.

As keynote speaker, Ms. Malkin called her address, “The Charge of the America First Brigade.” She proclaimed that she “could not be more ignited in her passion” in calling for allegiance to “the future and preservation of America first, not second, not third, not last—not subordinate to Saudi Arabia, nor China . . . or Israel or anywhere else.” She said, “There is no ‘America First Inc.’ This is an organic endeavor, not a corporation, not a racket. Not a pay-for-play machine like the money-grubbing spectacle taking place at the Gaylord,” blasting the nearby CPAC conference. “By the way, some organizations have been pressured to cough up $250,000 for the ‘privilege’ of merely holding parties near the main CPAC venue—a $250,000 price tag just to purchase a presence on the margins.” Ms. Malkin continued:

She recalled trying to convince her former establishment colleagues that “being against illegal immigration but [unconditionally] for legal immigration is kindergarten-level thinking.” She added that Conservative Inc. cannot seem to grasp that:

We grant 1.1 million green cards to this country every year. . . . In addition to those 1.1 million green cards flooding the country, you have the refugee resettlement pipeline . . . F-1 foreign student visa holders, and permanent residency acquired one way or the other by millions of visa over-stayers . . . plus chain migration which threaten to turn all of America blue.

While noting that the American white majority could become a minority by 2045, she summarized that when she launched her most recent book, Open Borders Inc., the “immediate response from the Soros ‘monkeys’ was that I was anti-Semitic, which has become a meaningless, useless term and everybody knows it. That’s why they’re so desperate to tar all of us.”

Regarding unbridled immigration, Ms. Malkin summarized: “There is no turning back. This is not ‘conspiracy replacement theory’; this is conspiracy truth.” 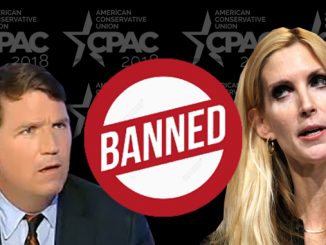