On April 12, Nevada rancher Cliven Bundy and thousands of his supporters forced hundreds of federal agents from the Bureau of Land Management to back down after a tense standoff involving seized cattle and disputed grazing fees.

This victory for those opposing an ever-growing federal government made national headlines and turned Bundy into a heroic David vs. Goliath figure.

On April 23, AMERICAN FREE PRESS had the opportunity to speak with Bundy.

It’s been two weeks since a thousand supporters of Nevada rancher Cliven Bundy forced Bureau of Land Management (BLM) officials to give up trying to seize Bundy’s cattle and retreat. This reporter recently had the opportunity to speak with Bundy about his impressions of this seminal event.

“I learned that I’m not the last man standing,” said Bundy. “Lots of courageous people who want liberty and justice also joined me. Americans are tired of centralized government acting tyrannically and with unlimited power. They realize that the Constitution doesn’t allow for such behavior.”

Bundy continued: “Our Founding Fathers fought a war against the British for this same reason, and today people are saying, ‘We’ve had enough of these abuses of power.’ Out here in Nevada, to a large extent the feds control our land, state laws, state regulators, the county sheriff, not to mention leasing power over how we use our resources. It’s time for us to exercise our conscience, and freedom was the key component of how we expressed ourselves against the feds. Up until this point, many Americans felt depressed and anxious. Now they see that we have a chance against big government.”

This is what the Nevada rancher had to say about that: “I agree with Harry Reid that we’re fed up with our government. Yes, we are willing to stand up against them. We’re not going to put up with guns being pointed at us. From my perspective, Reid seems to be calling for civil war by stirring the pot.”

Bundy next addressed one of his biggest points of contention. “The federal government owns no land here in Nevada,” he said. “According to the Constitution, the United States [government] is very limited in how much land they can own. The biggest question we must ask right now is: Does the federal government own this land, or does the state of Nevada? Sadly, Nevada citizens and our local leaders have let this happen. They’ve all been brainwashed. But there is no way, according to the Constitution, this can be federal land. It’s our land. It’s sovereign land.”

Dispelling some erroneous reporting in the mainstream media, Bundy told AFP, “This standoff didn’t result directly from BLM officials refusing to release my cattle. Rather, we demanded that our sheriff disarm 200 BLM bureaucrats and place their guns under a flag. We gave them a one-hour deadline, and after one hour and 20 minutes, we headed toward where my cattle were. You also need to know that less than 1% of my supporters had weapons, and mostly only sidearms. This was against 200 BLM agents possessing high-powered military rifles.”

Bringing our conversation to a close, Bundy stated: “The climax of this situation resulted when everyday citizens—we the people—stood against the U.S. Army with courage and determination. People on the front lines were determined not to back down. I’m happy to say that Americans now have a chance for some freedom. But before that happens, county sheriffs across America must take the guns away from these bureaucrats when they step on somebody’s land that is rightfully owned. They don’t need guns to serve papers to the public. It’s time now for government to be smaller and closer to the people. That’s what our Founding Fathers gave us in the Constitution.”

Senator Harry Reid—the man who had the audacity to call Nevada rancher Cliven Bundy a “domestic terrorist,” earns an annual salary of $193,400 and ranks as one of the political elite’s wealthiest fat cats with a net worth of approximately $10 million. So is it Bundy or Reid who is the real terrorist here? This reporter has done some fact checking on this very question.

The truth is that Reid has attained his vast riches by using Capitol Hill more as a turnstile for influence peddlers and illegal campaign contributions, and not as a home base to serve the people. Bolstering Reid’s status as President Barack Obama’s personal pit bull on the Senate floor are reassurances from Eric Holder’s Department of Justice (DoJ) that they’ll shield him from any corruption probes.

Recently, Utah prosecutors teamed up with Federal Bureau of Investigation (FBI) officials to investigate dirty money coming into Reid’s coffers. That was until Holder’s DoJ impeded this case from moving forward. That meant FBI lawmen were prevented from convening a grand jury or issuing subpoenas to witnesses.

Reid’s list of indiscretions reads like a who’s who of political graft at its worst. Reid and his oldest son, Rory, have sold their souls to the Chinese energy company ENN Energy Holdings Limited to construct a solar power plant in Nevada. In addition, there was also a profitable $700,000 land deal rumored to involve organized crime mobsters.

Worse, even though Nevada touts an unemployment rate double the national average, Reid directed over $47 million in pork-barrel spending to firms that enjoyed direct ties with his son. Reid’s nepotism surfaced when he funneled $31,249 to his granddaughter, whose jewelry outlet made fancy gifts for high-dollar donors.

And for good measure, current BLM Director Neil Kornze, who oversaw the Bundy ranch assault, once served as a senior advisor to Reid.

In a political atmosphere suffocated by hyper-political correctness, Cliven Bundy’s April 19 remarks, whereupon he discussed controversial racial matters, was distorted and heavily edited by The New York Times, among other national news outlets. To its credit, AFP has been the only national newspaper courageous enough to tackle these hot-button issues.

Bundy spoke some bitter truths when wondering if “Negroes,” as he called them, were actually better served today being enslaved under a system of generational government welfare.

In previous articles, AFP has interviewed numerous black leaders who’ve conveyed similar sentiments—that the real slave-owners exist in our federal government, and they control their chattel via welfare and food-stamp handouts. Because of race-pimping hustlers like Jesse Jackson and Al Sharpton, the black family has been decimated.

To his credit, Bundy stated: “I’m wondering if they’re better off under government subsidies. Their young women are having abortions, and their young men are in jail and their older women and their children are sitting out on the cement porch without nothing to do.”

In essence, Bundy made it clear that the federal government has conceived and perpetuated a system that’s made life far worse for black people, and other races because of black crime, than it was when they were attempting to be productive members of society, even though in forced servitude.

On April 24, in the aftermath of a mean-spirited backlash orchestrated by the Times that turned public sentiment against this iconic figure, this reporter spoke with Cliven’s wife, Carol.

“A lot of people in the black community agree with my husband,” said Mrs. Bundy.

“Clive isn’t at all racist. His main focus involves getting us back to the Constitution. He wants people to become the government again and get rid of government overreach. But the media went crazy. I want your readers to know that Cliven feels for these people that he spoke about.”

Jason Bullock, a black man, agrees. A a six-year U.S. Army veteran and bodyguard to Bundy, Bullock insisted on April 25: “Mr. Bundy is not a racist. Ever since I’ve been here, he’s treated me with nothing but hospitality. He’s treated me just like his own family. I would take a bullet for that man.”

On April 23 this reporter spoke with two Nevada activists about recent news that BLM land-grabbers were intending to confiscate 90,000 acres of farmland in the Red River Valley of Texas. The first, Janine Hansen, state president of Nevada Families for Freedom, illustrated the extent of this problem.

“The BLM are supposed to be managers,” Ms. Hansen told this newspaper, “yet they put 52 other ranchers in Clark County out of business, [all] except Cliven Bundy. They’re using a phony endangered species claim to destroy property rights and usurp control over the land. The only reason Bundy is still on his ranch is because he refused to be put out of business by BLM.”

According to Ms. Hansen, the situation is far more troublesome, though.

“Nevada is the worst state when it comes to federal domination,” she said. “It’s so serious that between 87% and 91% of all land here is owned by the federal government. Only 1% of Lincoln County is privately-owned. There’s no economic base there to even live.” 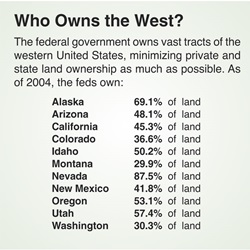 John Wagner, state chairman of Nevada’s Independent American Party, provided these details to AFP. “It’s about time Nevada became a full state instead of a partial state. But federal ownership of land also stretches into Utah. Look at a map sometime. BLM owns almost everything west of the Mississippi. They’re claiming everything that’s not nailed down.”

Ms. Hansen got to the root of this situation when she told AFP: “Bureaucrats such as BLM, DHS and the IRS are combining forces. Government no longer acts as a servant of the people. They now view us as simply being serfs on the land. During the Bundy protests, look at how people were forced into so-called free speech zones. They were telling these individuals where they could and could not speak. Plus, federal agents erected roadblocks to keep outside people from coming in. That’s why Harry Reid called Bundy’s supporters ‘domestic terrorists.’ He sees them the same way that King George viewed our Founding Fathers.”

As for the massive demonstrations at Bundy’s ranch, Hansen asked: “Do you know why so many people rallied to Cliven’s aid? It’s because they know they’re next on the list, whether by the IRS, DHS, DoJ or BLM.”