When my wife and I had our first baby in 2005, I was surprised, as I guess all parents are, just how much little babies can whine and cry. Sometimes it felt like it went on 24 hours a day. We would offer our precious daughter a pacifier, a spoonful of baby food, or we would rock her gently in a sturdy “sweet grass” basket, made by the Gullah people who live on the coastal islands of South Carolina, which we had been given as a gift. Little did I know, I should never have discouraged the baby’s whining. Had I just let her perfect her whining and crying, she one day might have been a perfect “reporter” for Media Matters for America, a well-heeled lobbying group dedicated to shutting up and shutting down all freedom of speech when it comes out of the mouths of anyone but politically correct leftists.

Yes, it was a mistake to try to get her to stop whining because now she could be making a pretty penny doing just that—whining and crying 40 hours a week—for “billionaire liberal activist” David Brock (according to The National Review), the opportunistic founder of Media Matters, a George Soros-funded anti-free speech coven located in Washington, D.C.

In May, American Free Press newspaper interviewed tough cop Sheriff Joe Arpaio about some very newsworthy topics including his unsuccessful bid for the U.S. Senate, the pardon he received from Donald Trump, and his plans for the future. Never one to mince words, Arpaio admitted that he “loved” our paper—as do tens of thousands of really great Americans across this nation. Sheriff Joe even congratulated AFP for “having the guts to speak out.” Thanks, Joe.

Eric Hananoki, a longtime journalistic hit man for Media Matters, wasted no time in following the marching orders from his affluent higher-ups and immediately crafted a whiny hit piece on Arpaio and AFP. But, as usual, the truth is far removed from the fake news reporting of leftists who get their paychecks to muster up as much manufactured outrage as they can.

Hananoki claims in the article that “American Free Press is an anti-Semitic outlet that has repeatedly and falsely claimed that the Holocaust is a ‘hoax.’ ” However, Media Matters readily admits that AFP “scrubbed” an interview with author Victor Thorn about a book (not published by AFP) and a book about the Holocaust and the JFK assassination (also not published by AFP) from our website. Is the Holocaust a subject that can never be discussed? Is every claim made by every “holocaust survivor” to be accepted as true, when we know, for instance, that multiple “survivors” have been outed as liars by their own communities?

Hananoki also cited an article published on AFP’s website about Elie Wiesel with the headline “Meet the Man Who Invented the ‘Holocaust.’ ” Of course, what Media Matters fails to admit is that Wiesel’s own children sheepishly claim that their father’s famous Holocaust book Night is “mostly fiction” and that the book was originally supposed to have been listed under the category of “fiction and literature,” according to the publisher. Even the Jewish newspaper Forward said the book should not be “taken as documentary.”

So, by the formula of Media Matters, Wiesel cannot be criticized for foisting a phony book on the public, claiming it was fact, simply because he is Jewish. That would be anti-Semitism—we think. If the Jewish Forward says it, it’s okay. But if we say it, we’re anti-Semites. It’s the free speech double standard whiny leftists love to use against truthtellers, especially conservatives.

What the Heck is Anti-Semitism?

We would challenge anyone to find something “anti-Semitic” in American Free Press newspaper, but the problem is, we are not even sure what “anti-Semitism” is. Is it criticism of the state of Israel, as the Anti-Defamation League insists? Guilty. Is it any criticism of the Israel lobby, which is, by all reliable accounts, the most powerful, well-funded, and persuasive lobby in the world? Guilty. Is anti-Semitism simply “hostility or prejudice against Jews” in general? Not guilty. Does that mean that the accountant of a homeowners association who embezzles $450,000 from the association, and just happens to be Jewish, cannot be discussed in a newspaper article because of his religion? That is ridiculous. But that’s Media Matters for you.

Another article quoted by Media Matters to smear AFP as “anti-Semitic” was entitled “Audio Interview: Jewish Fingerprints All Over 9-11.” Excuse us, but has Media Matters never heard of the “Dancing Israelis,” those known Mossad agents caught filming the World Trade Center towers collapsing on Sept. 11, 2001? Have they never listened to the Israeli talk show in which one of the men arrested that day (held in jail for months and mysteriously deported back to Israel) admits that he was “there to film the event”? I guess we should just refer to these Israelis as “cabbage farmers” and never mention their ethnicity. I hate to think if the “reporters” at Media Matters were ever charged with solving a crime. They wouldn’t even know how to find the truth, let alone recognize it if it were staring them in their faces. But let’s face it, they are not paid to write the truth. They are paid to whine … and whine … and whine.

The hypocrisy of Media Matters is astounding. For instance, to prove AFP is “anti-Semitic,” they cite articles on Willis Carto, who was a consultant for AFP when we founded this newspaper in 2001. Carto, as many of you know, was an extremely vocal critic of Zionist power, but the problem with casting Carto as an “anti-Semite” is that one of his best friends was Mark Lane, the world-renowned Jewish attorney and JFK researcher. Evidently, Carto needed a few lessons on being a “good anti-Semite.”

Perhaps Carto should have taken those lessons from the management at The New York Times and/or Media Matters President Angelo Carusone.

But worse than all these blatant lies is the source of the information on Carto itself. Just recently, according to The National Review, “Times reporter Jeremy Peters said that allies of President Trump are employing the opposition research model pioneered by the liberal advocacy group Media Matters to tar journalists that report critically on the Trump administration and any conservatives they don’t like.”

What did the “Media Matters model” for muckraking uncover at the Times? It found that top officers there were regularly exchanging deeply anti-Semitic jokes in their social media posts. Perhaps that is why they are allegedly “experts” on anti-Semitism.

Times editor Tom Wright-Piersanti actually sent out a tweet that said, “I was going to say ‘Crappy Jew Year,’ but one of my resolutions is to be less anti-Semitic. So … HAPPY Jew Year. You Jews.”

He also included his observations of several bar patrons from India he had encountered during a night out on the town. Wright-Piersanti tweeted: “There are four Indian guys with mohawks … and each one is a ‘douche’ in his own awful way. I hate mohawk Indians. … I don’t hate Mohawk Indians, though. I love those guys. I just hate Indians with mohawks. Different Indians, different mohawks.”

Did he say “hate”? Yes, he said “hate.” Have you ever seen something like that from American Free Press in any forum? Of course not.

Worst of all, though, is the case of Carusone himself, the president of Media Matters for America. After trying to orchestrate an advertiser boycott of conservative talk show host Tucker Carlson, Carlson did a little Media Matters-style yellow journalism and uncovered multiple “racist,” “transphobic,” and “anti-Semitic” smears on Carusone’s own social media account. He had on numerous occasions denigrated Jews, Japanese people, people from Bangladesh—who he believes could not possibly be financially successful—and transsexuals.

In one post, Carusone described a Jewish man as being handsome, “despite his Jewry,” and said the man certainly had in his “possession … several bags of Jewish gold.”

Ouch! Now that’s anti-Semitism at its very worst. Julius Streicher would be proud.

Selling a history book and offering it up to the public in the spirit of free speech, or posting a “controversial” interview—of which AFP is accused— is nothing like posting ingrained, stereotypical racist beliefs again and again and then trying to lie your way out of it like Carusone did.

Rather than take responsibility for his deep-seated anti-Semitism and racism, this top dog at Media Matters for America—the self-appointed arbiter of what you can and cannot read and hear—tried to wriggle out of his blatantly anti-Semitic, racist statements by alleging they were some kind of a parody of right-wingers. This was quickly proven to be a really bad cover story that fell apart like tissue paper in a typhoon.

But who cares, right? He’s a leftist and he works for Media Matters, where the ends justify the means—and the ends are crushing free speech for us … but not them, using any means necessary. Rules for thee, but not for me.

Sheriff Joe—and all of the figures AFP has interviewed over the years—can be assured that AFP reports the news as we see it, with facts but, admittedly, without the poison of political correctness. Truth is our icon, and we refuse to bow down in prayer with Media Matters for America before the altar of political correctness and worship their golden calf—which feeds and grows from their daily offerings of lies, manufactured outrage, fake news, and their own deep-seated racial and religious bigotry.

We also refuse to apologize for honoring the spirit of freedom of speech and defending the right of all Americans—whether you be white, black, brown, yellow, red or blue, Christian, Muslim, Buddhist or Jew—to speak their minds on any topics, as long as they don’t advocate violence. 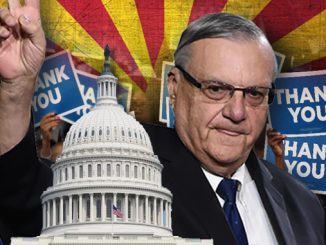