Massive home destruction from California wildfires may be linked to “smart meters.”

Longtime activist and Eagle Forum of California President Orlean Koehle is highly doubtful that the widespread fires that have ravaged California are the result of errant “camp fires” and other innocuous causes. She is working with Yreka, Calif. Tea Party member Louise Gliatto to call attention to the digital “smart meters” that monitor customer power usage in most of California and the nation. The goal is to inspire citizens to ask whether these devices are a major reason that entire neighborhoods of homes—in the fires last year and this year—burned so intensely and completely, and often in a uniformly bizarre manner.

Mrs. Koehle said on Nov. 26 that the Press Democrat newspaper in Santa Rosa, Calif. declined to publish her guest column about evidence that smart meters have a low threshold of resistance to power surges and can explode, thereby causing ultra-hot fires when that threshold is breached.

However, another newspaper, the Yreka area’s Siskiyou Daily News in Siskiyou County, ran her column.

Focusing on the fall 2017 Santa Rosa fires, Mrs. Koehle wrote in her column: “So many people are placing the blame for the horrendous fires in Santa Rosa last year (where over 5,000 homes were destroyed and 42 people killed) on PG&E (Pacific Gas & Electrical) for not taking better care of their power lines, which were falling down in the high 60-80 mph winds during the evening and night of Oct. 7-8 and creating sparks that started the fires. Could that be only half of the story?”

She continued: “According to an expert, Bill Bathgate, an electrical engineer who has worked for the Department of Defense, when the power lines were downed they created an electrical surge that went directly to the homes that have smart meters and ‘caused a significant fault and an explosion of the meters.’ The smart meters are designed to resist 300 volts of surge, but the surge was probably much higher—in the thousands of volts—and caused them to explode. Could this explain why so many people as they were fleeing their homes the night of Oct. 8 heard the sound of ‘pop-pop-pop’ explosions?”

Mrs. Koehle told this AFP writer that, according to Bathgate, electrical fires burn with higher temperatures than a normal fire, up to around 3,000 to 4,000 degrees, “hot enough to melt metal” and “even ceramics” including toilets and tubs.

She added that this could explain “why hardly anything was left in the homes except the brick fireplaces.” Moreover, “all refrigerators, washing machines and other appliances were melted and the cars in garages were left with only their steel frame; all aluminum had melted, all electrical components were gone, and even the rubber had melted off the tire frames.”

Mrs. Koehle’s home in Rincon Valley in Santa Rosa was directly in the path of the “Tubbs fire” in October 2017, but their home miraculously survived the fire even when their neighbors’ homes around them burned to the ground, again with all metals melted.

Mrs. Koehle and her husband were the only area homeowners who refused PG&E’s smart meter. They kept their old analog meter that lacked a radio-frequency chip and had nothing in it to make it explode. Tragically, in the aftermath of the blaze, the local utility audaciously installed a smart meter anyway.

Analog meters are also grounded, so if there is a surge, it goes into the ground and there is no explosion, Mrs. Koehle said. In south Stockton, Calif., back in March of 2015, more than 5,000 homes were left without electricity after a power line was reportedly hit by a dump truck. The collision caused the upper wire of the power line to fall on the bottom wire, sparking a power surge that caused hundreds of smart meters “to literally explode.”

As for Ms. Gliatto—who agrees that evidence is mounting that smart meters are a strong factor in California’s fires—she said that, as a conservative in north Siskiyou County, it’s not always easy to agree with the more liberal-minded residents to the south, but exploring the smart meter angle has brought about the kind of unity that can easily happen when people stop listening to the divisive mainstream media and start talking amongst themselves to take action.

“I found a like-minded person in south county who’s very liberal. And the liberal was shocked that a conservative like me is concerned about smart meters,” she said, while describing the resulting cooperative activities.

“We went to different libraries, one in north county and two in south county to give presentations, and we joined forces with a retired electrician.

We did letters to the editor and a protest in front of our provider, Pacific Power’s office building, and put YouTube videos of the protest online,” she explained. She added that southern Oregon activists are joining northern Californians in the wake of this year’s fires to fully study the issue and seek measures to help people opt out of having to use smart meters, among other objectives. 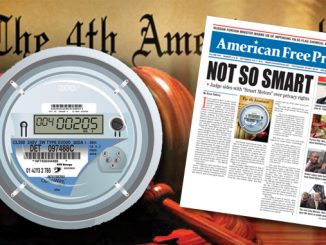 Not So Smart: Judge Sides With ‘Smart Meters’ Over Privacy Rights

2 Comments on Why Are Houses Burning, But Not Trees?