Those who forget history are doomed to repeat it. In that closing statement, director Charles Ferguson reminds us that “Watergate,” his six-part documentary, is not as much about reassessing the twilight of Richard Nixon’s presidency as it is a less-than-subtle commentary on President Donald Trump.

As further evidence, consider the documentary’s full title: “Watergate—Or, How We Learned to Stop an Out-of-Control President.” The phrase “learned to stop” implies that the roadmap has already been documented. It is the execution of the roadmap that must now commence. Also consider that its three-night airing on the History Channel occurred throughout the weekend before the mid-term elections. At that point, it also becomes a Democratic Party campaign ad.

Ferguson knows three categories of Republicans in the film. There are those Watergate Committee senators and FBI/Justice Department appointees who bravely stand up against Nixon’s tyrannical discretions. There are interviewees such as Pat Buchanan, who Ferguson “corrects” after most of Buchanan’s remarks. Lastly, there are the evil stalwarts of “Berlin Wall” loyalism who protect Nixon from the real world and continuously offer increasingly illegal advice. These are the Haldemans, Ehrlichmans, and Colsons of the White House. There were no good men who remained loyal, according to Ferguson’s premise, though this is probably the correct category in which Buchanan belongs. It may also be a veiled warning to those appointees, aids, and staffers within the Trump administration.

One figure that is left unjudged is John Dean, the White House counsel from 1970-1973. While the personality traits of Chief of Staff H.R. Haldeman, domestic policy chief John Ehrlichman, National Security Advisor Henry Kissinger, and Nixon are all cartoonishly emphasized by laughable dramatizations, Dean is portrayed as offering the smart, if not always legal, advice. He is also someone whom Ferguson relies on heavily via interview.

Dean finally admitted to one count of conspiracy after having testified to the Senate Watergate Committee under “use immunity,” which meant that nothing he said could be used to prosecute him later. He was never given the full immunity he had desired, though MSNBC has done everything in its power to rehab Dean’s image.

Because Dean’s testimony before the committee, as well as in Ferguson’s treatment, drove the story, nothing was mentioned of his link to the break-in or the Heidi Rikan call-girl ring that was operating out of the Democratic National Committee (the ring for which author Phil Stanford has since provided photographic evidence). Gen. Alexander Haig, Haldeman’s replacement as chief of staff, also goes unscathed throughout the four-plus hours. Ferguson received an immense amount of cooperation from Bob Woodward and Carl Bernstein. Therefore, though Haig has been tied to Woodward, well before the Watergate years, by Chairman of the Joint Chiefs Adm. Thomas Moorer, Defense Secretary Melvin Laird, and a Pentagon spokesman, it is never mentioned.

Deep Throat is still identified as FBI Deputy Associate Director Mark Felt and is only briefly mentioned. Without Dean as a major factor in the break-ins and without Haig pushing the downfall, what we have in the film isn’t truth. Instead, it’s a glorification of textbook history, and it’s the kind of mainstream media mythology that continues to be pushed in order to maintain its elite political order.

It is Sen. Howard Baker (R-Tenn.) who performs the film’s face turn. He and Fred Thompson, minority counsel for the Republican senators, are labelled as moles on the committee.

What the committee said, Nixon’s men heard through Baker and Thompson. It was Baker who would famously ask Dean what Nixon knew and when he knew it. But when Baker realized that Nixon had been involved in the cover-up, Baker jumped into the fray head-first, questioning Ehrlichman in what one reporter called a “hostile” interrogation. Baker, the way the filmmakers portray it, had finally joined the good guys. Is this a reminder to honest Trump loyalists that redemption is a possible and worthwhile endeavor?

In an attempt at seeming not wholly partisan, committee member Sen. Lowell Weicker (R-Conn.) was presented as someone who had to throw the most rancorous fish overboard to save the boat.

In the Nixon tapes, the president does point his finger at the man he fully believed, with all of the information given to him, was behind Watergate. “This is a Dean plot. Period,” Nixon said. Critical Nixon biographer Richard Reeves also described Dean’s motivations vividly. “[Dean’s] loyalty was not to Richard Nixon,” Reeves said. “His loyalty was to John Dean.” Still yet, Dean comes across in the end as the affable, tough survivor rather than the co-conspirator or the instigator.

The obvious political nature of this historical documentary is supposed to tweak the erratic behaviors Never-Trumpers have embedded within them. That was an easy match to light for Ferguson. The deeper lesson of the documentary was aimed at Republicans, and it’s a lesson they were also supposed to learn from Woodward’s Fear: The ship is sinking. Abort. Even if you are a believer, you can’t save it. Get out with your integrity intact. But by all means, leak. Leak to the good mainstream journalists who are actively trying to unearth the evil that men do. Then you, too, could be a redeemed Baker, an honest partisan like Weicker, or even a Deep Throat. Maybe, however, ignoring the truth of Dean, Haig, et al., will doom us to repeating it.

AFP’s Online Store has a wide range of books covering the Nixon presidency and Watergate. They include The Real Watergate Scandal: Collusion, Conspiracy and the Plot That Brought Richard Nixon Down, The Greatest Comeback: How Richard Nixon Rose from Defeat to Create the New Majority, andNixon’s Secrets: The Rise, Fall and Untold Truth About the President, Watergate and the Pardon. See www.AFPStore.AmericanFreePress.net. 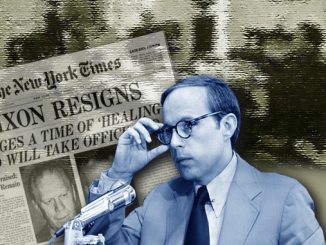