If someone believes that most, or all, “terrorists” are invented and created by government agents provocateurs, would, or should, they be considered a “conspiracy theorist”?

In fact, agencies such as the Federal Bureau of Investigation (FBI) have been busily creating terrorists out of what had been law-abiding individuals. The system features entrapment, sting operations, provocations and denial of due process, with anonymous juries, secret evidence and extensive pretrial detentions.

In the new book The Terror Factory: Inside the FBI’s Manufactured War on Terrorism, author Trevor Aaronson documents hundreds of Americans who have been hassled by the government as if they were terrorists. But how many actual terrorists have been caught by this grand effort? Aaronson was able to look at the data from 2001 to August 2011, a database of 508 defendants whom the government considered terrorists. Of the 508, 243 had been targeted due to an FBI informant. One hundred fifty-eight had been caught in sting operations, and 49 had been manipulated by an agent. The number of actual terrorists? Fewer than half a dozen. 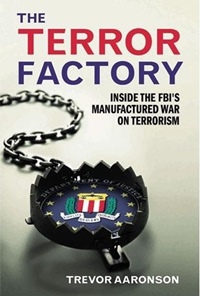 In those scores of sting operations, almost every “terrorist” was uneducated, unsophisticated and economically strapped—hardly people likely to plan and launch terrorist operations without major help from the government. It’s called “creating crimes to solve crimes so they can claim a victory in the war on terror.”

To catch a handful of dangerous hombres and a slew of patsies, the government has built the largest network of spies ever to exist in America, with 10 times as many “shoes on the street” today as during the heyday of J. Edgar Hoover. It spends $3 billion a year “fighting terrorism” and needs results to show to the media and Congress.

While the defendants may be broke, it’s not uncommon for informants to make $100,000 or more on a case—plus tens of thousands more if the case results in a conviction. Not surprisingly, the ranks of informants has grown explosively.

James J. Wedick, a retired FBI agent with 34 years of service, ventured to say that 90% of the cases seen in the last 10 years “are garbage,” and informants are unreliable sources and “the most dangerous individuals on the planet.”

He says it is not uncommon for the FBI to send well-heeled informants (with taxpayer money) into poor Muslim communities to try to trick cash-starved men into going along with their jihad-related entrapment schemes, knowing that these men are desperate for a job, a loan, free meals—anything that will help them support their families.

Congress allocates billions to the FBI to find terrorists and prevent the next attack. The FBI in turn focuses thousands of agents and informants on Muslim communities in sting operations that pull easily influenced fringe members of those communities into terrorist plots conceived and financed by the FBI. The Justice Department then labels those targets, who have no capacity on their own to commit terrorist acts and no connections to actual terrorists, as terrorists and includes them in data intended not only to justify how previous dollars were spent but also to justify the need for future counterterrorism funding.