Given the fact that Washington spends more on its military than the next 10 countries combined, says Phil Giraldi, the notion that U.S. isn’t spending enough on weapons is absurd. At what point will America stop playing (unwanted) global policeman, before or after the nation is bankrupted?

In the 18th century, the Vicomte de Mirabeau famously quipped, “Other states possess an army; Prussia is an army which possesses a state.” There is considerable danger that the United States is proceeding down the same road, as military spending has become untouchable and America continues to play the role of world policeman.

Some recent commentary has been suggesting that the United States is becoming a second-rate military power because it is not spending enough money on weapons. Given the fact that Washington spends more on its military than the next 10 countries combined, the premise would seem to be either completely ridiculous or evidence of waste, fraud, and mismanagement at the Department of Defense (DoD) that far exceeds anything ever seen before. If it is true that the un-audited Pentagon has somehow mislaid $21 trillion over the course of 10 years, then no amount of increased spending will remedy the deficiencies in the DoD procurement system.

One might object that the Pentagon is not underfunded, pointing out that it is the U.S. military’s perception of its mission that is grotesque, that no country needs 1,100 foreign bases worldwide to be secure. Nor does national defense require American soldiers to be fighting on multiple fronts in wars thousands of miles away that are undeclared, illegal under international law, and non-compliant with the Constitution of the United States of America.

There is definitely something wrong with the way the establishment prioritizes spending by the government, which relates to how the allegedly underfunded military story is being presented. One might well argue that the national debt, which is currently nearly $22 trillion and has grown enormously in support of America’s wars, is a far greater threat to the survival of the United States than is Iran or even Russia. That would be the fault of a feckless Congress and White House, which clearly don’t believe in the old maxim that you can spend only what you earn.

But instead of blaming the politicians, which is where the problem really derives from, the chattering class and media have instead focused on “entitlements.” The war on entitlements began, in its current formulation, with former Rep. Paul Ryan (R-Wisc.), and it culminated in last year’s enrich-the-rich tax cut. Working Americans will now be taxed on their taxes since they can no longer deduct state and local taxes from their incomes when paying their federal taxes. Ryan meanwhile has departed Congress with a handsome pension and generous health insurance for life and will embark on a new career as a seven-figure lobbyist.

Much of the war on entitlements comes from neoconservative talking heads who mostly work for think tanks that are generously funded by defense contractors and pro-Israel oligarchs. The neocons are, like Ryan, well paid and benefited, much more so than the average American, so they have no real horse in the race apart from keeping the money flowing.

An article that appeared recently in The Washington Post perfectly illustrates how the establishment and its media accomplices are selling a product that fearmongers use to sustain more military spending. It is entitled “Wake up. America’s military isn’t invincible,” written by regular columnist Robert J. Samuelson.

The piece begins with, “The most uncovered story in Washington these days is the loss of U.S. military power—a lesson particularly important in light of recent events: the resignation of Defense Secretary Jim Mattis; President Trump’s rash decision to withdraw U.S. troops from Syria; North Korea’s announcement that it will keep nuclear weapons after all; and alleged massive computer hacking by Chinese nationals.”

But “loss of U.S. military power,” if it can be quantified at all, has nothing to do with Mattis or Syria, nor with North Korea or China—or even with Trump, who has increased the armed services budget. Samuelson makes his case by citing defense modernization programs in China and Russia and “advances” in Iran and North Korea that undercut U.S. military capabilities, but, if he were to be honest, he would be conceding that he is only discussing comparative advantage in some areas. He refers to a recent report suggesting that, because Russia and China have upgraded their capabilities, “If the United States had to fight Russia in a Baltic contingency or China in a war over Taiwan . . . Americans could face a decisive military defeat.”

It should come as no surprise that the possible armed conflicts cited by Samuelson are carefully chosen to produce the desired result. Confronting Russia or China in their home waters thousands of miles away from the U.S. gives all the advantage to the defense, which will be able to operate on interior lines and maximize available land, sea, and air forces while the Americans have to rely on a lengthy and vulnerable logistical chain. The reality is that the U.S. is second to none in terms of ability to project power, with the United States uniquely having 19 aircraft carrier battle groups that can deliver significant military air power to anywhere in the world.

Samuelson goes on to condemn what he calls “unwise cuts in defense spending” and blames the lack of money for the Pentagon on “the American welfare state—Social Security, Medicare, Medicaid, food stamps, and the like.” He advocates cutting “welfare” to buy more and better weapons. Since he is a neocon, it is obligatory that he include some reference to Adolf Hitler. In this case he warns that Hitler’s Germany re-armed while the rest of the world did nothing, an analogy that is not even true, as Germany was outnumbered and outgunned by its enemies when World War II started.

As Samuelson is writing for The Washington Post it is also necessary that he conclude with a slap at Trump: “We need to keep our commitments—Trump’s abrupt withdrawal from Syria devalues our word. And we need to repair our alliances,” but one might well opine that there is something seriously wrong with that kind of thinking, where weapons and the promotion of violence overseas always take precedence over meeting the needs of the American people. Government pension and health programs, largely paid for by contributions from workers, do a great deal of good for many Americans and would be even better managed if the Congress would stop raiding the various trust funds. Government exists to benefit the citizens that together make up the state, not to meddle in the affairs of other nations and peoples worldwide.

The selling of America-the-vulnerable is a fiction promoted by those who make money from the continuation of a warfare nation. The United States and the American people have not benefited one bit from the pointless wars in places like Afghanistan, Iraq, Libya, and Syria. Real security will come when Washington brings the troops home. 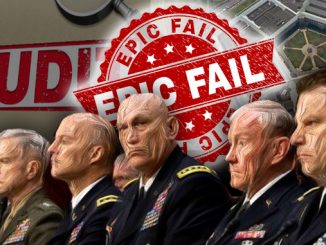 1 Comment on U.S. Locked Into Endless Cycle of War