In speaking to the UN late last month, President Trump emphasized the right of nations to be proud of their heritage and take control of their destiny. “We only ask that you honor our sovereignty in return.”

President Donald Trump’s second address at the United Nations General Assembly in New York on Sept. 26 was used as yet another opportunity for the populist businessman turned president to blast globalism and reaffirm his commitment to put America first. The speech echoed many of the themes that got Trump elected and ones which he has long been championing: an emphasis on placing the interests of the American people and workers first and foremost in any foreign or domestic policy consideration, a rejection of globalism, and an affirmation of national sovereignty, among other important topics.

Trump began the speech by trumpeting his administration’s accomplishments, which he argued amounted to “more than almost any administration in the history of our country,” which drew a mixed reaction from those in attendance. The president praised his administration’s handling of the U.S. economy, which he argues is “booming like never before,” and highlighted the success of the stock market, the return of U.S. manufacturing and industrial jobs, and the reduction in the unemployment rate, especially for minorities.

The president then moved on to focus on his concept of “patriotism over globalism,” noting that the representatives in the room are each “the emissary of a distinct culture, a rich history, and a people bound together by ties of memory, tradition, and the values that make our homelands like nowhere else on Earth,” emphasizing the right of each unique nation to be proud of its heritage and to take control of its destiny.

“That is why America will always choose independence and cooperation over global governance, control, and domination,” the president continued. “I honor the right of every nation in this room to pursue its own customs, beliefs, and traditions. The United States will not tell you how to live or work or worship. We only ask that you honor our sovereignty in return.”

The president commented later in his speech that “America is governed by Americans,” and went on to denounce globalism. “We reject the ideology of globalism and accept the doctrine of patriotism,” he boldly declared.

He would later defend his decision to withdraw from the UN Human Rights Council. He added that the U.S. will “provide no support in recognition to the International Criminal Court [ICC]” at the Hague.

“As far as America is concerned, the ICC has no jurisdiction, no legitimacy, and no authority,” President Trump defiantly stated. “The ICC claims near-universal jurisdiction over the citizens of every country, violating all principles of justice, fairness, and due process. We will never surrender America’s sovereignty to an unelected, unaccountable, global bureaucracy.”

Throughout the speech, Trump repeatedly emphasized his America-first stance while underscoring his administration’s respect for the sovereignty of other nations and their desires to pursue their own unique political and economic interests.

In typical fashion, Trump declared that America “will not be taken advantage of any longer,” referring to the disastrous free-trade deals negotiated by previous U.S. administrations that have had serious repercussions for American workers and corporations, particularly in manufacturing and industrial production. He then highlighted the recent trade agreements his administration has negotiated, which include deals with Mexico and Korea, as well as increasing sanctions on Chinese-produced goods that are exported to the United States. Tariffs have been increased on other countries, too, which represent a concerted effort by the Trump administration to protect its citizens from the ravages of unfettered and entirely unfair so-called free trade, a longstanding principal of the post-WWII global economic order.

“We will no longer tolerate such abuse,” the president declared. “We will not allow our workers to be victimized, our companies to be cheated, and our wealth to be plundered and transferred. America will never apologize for protecting its citizens.”

Despite his strong rejection of globalism and open desire to place the interests of the American people and nation first, the president totally embraced discredited and false neoconservative positions on Iran and the Israel-Palestine conflict, demonstrating the strong influence that Israeli partisans and Zionist sympathizers have in the Trump administration. During the speech, the president hysterically denounced the Iranian government for purportedly fomenting chaos and destruction in the region—critiques that any honest observer of Middle Eastern affairs knows full well apply to America and Israel’s aggressive and criminal actions taken in the region over the course of the past two decades.

Despite the tired neoconservative rhetoric, the president’s speech was clearly a strong and forceful denunciation of the ideology of globalism and the New World Order agenda, and an open and proud embrace of patriotism and national sovereignty.

Win or Lose, Donald Trump Has Left a Huge Footprint 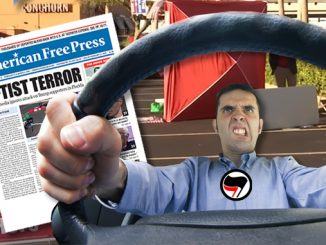