Does the world need population control, or does it need corporation control? According to Jim Marrs in his new book Population Control: How Corporate Owners Are Killing Us, corporate owners, the one-percenters, are killing us, and it may be intentional.

Robert Edward “Ted” Turner III, who is suspected by some of being one of the members of the secret society behind the mysterious, disturbing Georgia Guidestones, himself has five children, but he wants the 99-percenters—those who do not have a bazillion dollars—to limit themselves to one child per couple for the next 100 years. The goal is to reduce the global population to 500 million.

Consider that the world population is currently about 7 billion and is expected to grow to almost 10 billion by 2050. So the elite psychopaths, who made a mess of our world in the first place through war and pollution, want to save humanity by killing humanity, called “a cancer on the Earth” by the guidestones.

The world is overpopulated, but, says Marrs, apparently those with great power and wealth have decided to take overpopulation into their own hands.

Dave Hodges, host of the “Common Sense” show, recalled how President Ronald Reagan once remarked that a threat by space aliens might be the unifying force necessary to bring the nations of Earth together in a common cause.

Hodges warned: “Indeed, all of mankind does face a common foe. However, it is not aliens. Our common foe is the elite that presume that they have the God-given right to exert ownership over all of us including the right to life or death. And for 95% of us, the elite are actively engaged in systematic extermination of mankind.”

This isn’t just something for the future—they are already killing us now. And it has been going on for decades. In the July 26, 2000 edition of the Journal of the American Medical Association, readers were shocked  to learn that the No. 3 cause of death for Americans was doctor related. Some researchers say there may be a million preventable deaths yearly in the U.S. caused by doctors and their pharmaceuticals.

Deadly food is another weapon the corporations are using to kill us. 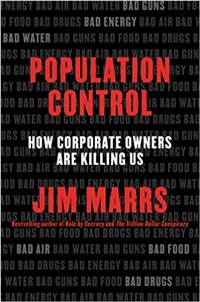 Food processing corporations have known for a long time that low-quality fats, salt and sugar are bad for us in the quantities they are consumed in the “standard American diet,” yet they use advertising and fraudulent “scientific studies” to convince the average American to consume a whopping 150-180 pounds of sugar annually and twice the recommended amount of salt, cheap fats and oils we should ingest. Why? These items are addictive, allowing for billions in sales to beef up the bottom line for the stockholders. Meanwhile obesity, diabetes, cancer and circulatory diseases are national health crises and on the rise.

What about Coca-Cola Inc.? There is nothing at all healthy about Coke, but its owners don’t want you to know that. In 2012, Coca-Cola, with other corporate giants Nestle, Kraft, Kellogg, General Mills and PepsiCo, donated nearly $10 million, in addition to the $12 million given by Monsanto and DuPont, to defeat California’s Proposition 37 proposal for mandatory GMO labeling, says Marrs.

It should surprise no one that the chief executive of Coca-Cola is also a regular attendee of the annual Bilderberg meetings.

Processed food is laced with sodium nitrate for color, the excitotoxin monosodium glutamate, MSG, for taste and various chemicals to extend shelf life while shortening human life. Food has been stripped of essential vitamins, minerals and other nutrients.

Substances have been added to our foods to drive consumers insane, while causing widespread infertility, organ damage and a loss of any ability to engage in rational, conscious thinking.

Fluoride, a toxic byproduct of the aluminum  corporations, is added to water supplies and toothpaste on the pretext that it will prevent cavities, although there is no evidence for that claim. The substance can, however, damage the brain, lower IQ and have other toxic effects.

Even our air has become hazardous thanks to industries spewing pollutants into it, says Marrs.

Between 1989 and 2005, average sperm counts in men have dropped from 73.6 million per milliliter to less than 50, making it hard for couples to have babies. Data place yearly sperm declines at 1.5% in the United States—and 3% in Europe and Australia. This is partly due to harmful chemicals in our food, water and air, fostered by giant multinational corporations run under shadowy owners whose names are often found on the list of Bilderberg attendees.

If these trends continue, humanity’s days on Earth may be numbered.

But there is still hope. Americans are waking up and taking matters into their own hands, as they did at the Cliven Bundy ranch in Nevada. Some say a second American revolution is in the making. But this time it will be against the mega-corporations here at home, not a king and Parliament across the ocean.

8 Comments on The Population Control Conspiracy