Jumping for joy, some patriots are now convinced that those who control the big media have “gone conservative.”

The patriots point out that the traditionally “liberal” media is dumping on the Obama administration and expressing disgust that the Internal Revenue Service (IRS) was targeting tea party and conservative groups.

This indeed may be the first time in history the media has been so concerned about the mistreatment of such groups that have always been subject to special IRS scrutiny.

And then there’s the scandal enveloping Attorney General Eric Holder over the Department of Justice’s (DoJ) seizure of journalists’ phone records.

“Things are so bad,” patriots say, “even the media has come around and realizes how rotten Obama and Holder and the IRS are.”

Well, it’s not quite that simple.

If nine months ago you were carefully reading the August 13, 2012 issue of AMERICAN FREE PRESS, you wouldn’t be surprised at the media’s disdain for the president, his AG and the IRS.

Here’s what AFP reported, foreshadowing the scandals that some say could lead to the impeachment of the president:

Both supporters and opponents of President Obama are concerned about negative political repercussions likely to arise from an ongoing high level criminal investigation.

It is not widely known that the Obama administration’s attorney general, Eric Holder, has upset some powerful people by launching a federal grand jury inquiry into wealthy Americans who have, according to a June 19 report from CNBC, “hidden money in Israel, many for generations,” in violation of U.S. tax laws.

Two of Israel’s biggest banks—Bank Leumi and Bank Hapoalim—are reportedly central to the inquiry and note that in 2008 the Israeli government’s controlling interest in Leumi was purchased by Cerberus, the Wall Street syndicate run by Stephen Feinberg, described by Israel’s Ha’aretz as “a New York Jew with a golden touch.” 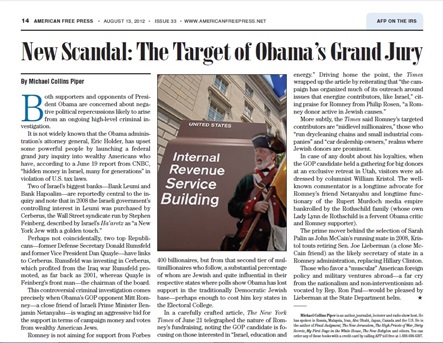 Since AFP first focused on that little-noticed grand jury—predicting trouble for Obama and Holder as a consequence of this inquiry— the IRS-DoJ investigation actually escalated.

On September 16, 2012, Reuters reported another Israeli bank, Mizrahi-Tefahot, was now on the list of financial institutions under scrutiny by Holder and the IRS.

Earlier, on June 20, Forbes.com assessed the situation, pointing out that “U.S. citizens with accounts in Israel may feel a little less secure,” since, Forbes noted, “the Justice Department and IRS announced the indictment of three Israeli-American tax preparers charged with helping Americans hide money in Israeli banks.” Charged were a father and son who had dual citizenship in Israel and the United States, along with an Israeli citizen living in the U.S.

In fact, according to prominent New York tax attorney Asher Rubinstein: “Many American Jews maintain bank accounts in Israel for various reasons.” But while such accounts are legal, problems arise if those accounts are used to avoid U.S. taxes.

In the wake of all of this, a vocal congressional voice for Israel, Representative Sander Levin (D-Mich), issued a sharply-worded letter to the IRS demanding to know if pro-Israel groups had been targeted by the IRS along with the tea party. In fact, according to the May 19 issue of the influential Jewish newspaper The Jewish Press: “Pro-Israel groups were targeted.”

All of this—at a time when the president seems disinclined to attack Iran or invade Syria (projects of special concern to Israel)—might explain why the big media (largely controlled by families and financial groups that are firm supporters of Israel) has begun savaging the president, his AG and the IRS.

Michael Collins Piper is an author, journalist, lecturer and radio show host. He has spoken in Russia, Malaysia, Iran, Abu Dhabi, Japan, Canada and the U.S.