There has been a lot of talk that the mainstream media is exaggerating the threat to the United States from the African Ebola virus disease (EVD) epidemic so that the U.S. government can impose draconian new medical decrees on the American public. There can be no doubt that strange things are occurring.

Despite these alarming developments, a number of researchers are convinced that EVD shock stories are being exploited to further the global government’s nefarious agenda. One of these doubters is Jeff Murray, a researcher and businessman who belonged to the same research group as former Los Angeles Federal Bureau of Investigation (FBI) Director Ted Gunderson.

Steele was referring to the case of Thomas Eric Duncan, the first person in the U.S. to come down with Ebola.

“Considering Steele’s status within the CIA, when someone says things that are potentially detrimental to their well-being, we should pay attention,” added Murray.

During a September 18 interview, Steele, who ran for president in 2012 on the Reform Party ticket, said: “The false flag I’m hearing about is a simulated Ebola attack in which they use biochemical weapons that dissipate, but then pretend it’s Ebola.”

Earlier, on September 9, Dr. Cyril E. Broderick, a Delaware State University (DSU) associate professor in the agriculture and natural resources department,  revealed to the Liberian Observer, Liberia’s largest newspaper, that Ebola resulted from bioterrorism experiments initiated by the U.S. Department of Defense. Since then, Broderick has been attacked by the usual suspects for being a “conspiracy theorist,” but a DSU spokesman said, “The university is not going to abridge his First Amendment rights to give his opinion about the issues of the day.”

Murray believes there is merit in Broderick’s speculation. 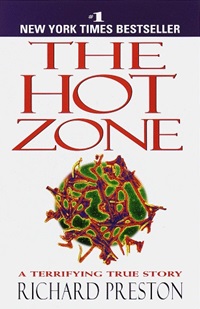 The Ebola virus kills nine out of 10 of its victims so quickly and gruesomely that even biohazard experts are terrified. It is airborne, it is extremely contagious and, in the winter of 1989, it seemed about to burn through the suburbs of Washington, D.C.

At Fort Detrick’s Army research facility outside the nation’s capital, a SWAT team of soldiers and scientists wearing biohazard suits was organized to stop the outbreak of the exotic “hot” virus. The grim operation went on in secret for 18 days and has been covered up ever since.

THE HOT ZONE: The Terrifying True Story of the Origins of the Ebola Virus tells this dramatic story in depth, giving a hair-raising account of the appearance of rare and lethal viruses and their threat to the human race. From a remote African cave hot with Ebola virus, to an airplane over Africa that is carrying a sick passenger who dissolves into a virus bomb, to the confines of a military lab where scientists risk their lives studying substances that could kill them horribly, THE HOT ZONE describes situations that a few years ago would have been taken for science fiction.

As the rain forests of the world are destroyed, unknown viruses that have lived there for eons are entering human populations. The implications for the future of the human species are terrifying, yet science might not be able to save us next time.

Horror writer and amateur historian Stephen King said, “The first chapter of THE HOT ZONE is one of the most horrifying things I’ve read in my life—and then it gets worse. That’s what I keep marveling over: it keeps getting worse. What a remarkable piece of work.”

“We’ve seen an endless stream of false flags. The people behind this orchestrated panic have a plan, and they’re moving on it,” said Murray. “I don’t believe a word that comes from politicians or the mainstream media’s propaganda machine, especially when they try to perpetually keep us in reactionary mode.”

And if that’s not enough, Naomi R. Wolf, the well-known author of the bestselling book The End of America, caused quite a stir on October 4 by claiming that U.S. troops dispatched to Liberia weren’t intended to combat Ebola but to militarize the African continent. Ms. Wolf’s original Facebook post has apparently been removed by her.

This possibility is particularly interesting in light of President Barack Hussein Obama sending 3,000 troops to Africa in mid-September to establish a military command center in Liberia.

Murray viewed such a move with suspicion.

“China has already staked a claim in Africa,” he said. “Is the Obama administration using this disaster as a way to follow suit in order to get Africa’s  natural resources? These missions always begin under the guise of ‘humanitarian aid’ before turning into a military operation.”

Economically, Africa may soon become the planet’s most prized battleground. With its population expected to double by 2050, could a two-pronged approach be at hand where massive numbers of citizens are eliminated by a fatal pandemic while superpower nations seize African land?

In 2009 China surpassed the U.S. as Africa’s largest trading partner. China has also tapped into an unlimited wealth of low-priced labor as well as constructing infrastructure that includes power stations, telecom outlets, highways and railroads. Even more prized are Sudan’s vast oil fields that China covets to satisfy its energy needs.

Putting this matter into perspective, activist and 2004 Socialist presidential candidate Bill Van Auken wrote on September 17, “The militarized response to the deadly epidemic has underscored Washington’s increasingly heavy reliance on its residual military superiority in what has become a second “scramble for Africa,” pitting the U.S. against China in a struggle for control of the continent’s markets and resources.”

“I can’t imagine what will happen when we get a real case of Ebola,” Spratte said. “We simply are not equipped to handle it.”

These dangers crossing America’s southern border are real, former CBS News investigative reporter Sharyl Attkisson wrote on October 4. Take the mysterious enterovirus respiratory illness, which has popped up in 43 states. The spread of that virus follows in close proximity to the 50,000-plus Central American illegal aliens who have been secretly relocated throughout many American states. Ms. Attkisson wrote that Obama’s cronies will not divulge where these illegals are currently being housed.

Obama has shirked his responsibility to protect the American public by not urging the Federal Aviation Administration to place a travel ban on Africans. Hundreds of airline cabin cleaners at New York’s LaGuardia Airport walked off the job in protest on October 9, saying that they have been forced to clean vomit, blood and other bodily fluids in restrooms where they could be exposed to Ebola from African flyers.

A final claim about the Ebola pandemic questions if top-level Big Pharma elitists want to exploit the fearmongering around Ebola in order to profit from mandatory Ebola vaccinations. Amid the frenzy surrounding alleged anthrax mailings following the September 11, 2001 terror attacks, sales of the antibiotic Cipro skyrocketed 1,000%.

12 Comments on The Ebola Enigma