Will the Bladensburg, Md. Peace Cross be the next Christian symbol to be ripped down? The American Humanist Association is working toward that end. Now, the fate of this memorial to World War I veterans rests with the U.S. Supreme Court justices.

The 40-foot-tall Bladensburg Peace Cross—located less than 15 miles from this newspaper’s headquarters—was built in 1925 to honor local military men who died in World War I. Now, it is under attack by some strange birds from Bladensburg, Md. supported by the American Humanist Association (AHA), a U.S. non-profit whose main mission seems to be removing any and all references to religion and God from the public square.

Founded in 1941, the AHA lawyers-up those whose “constitutional rights” are allegedly breeched, actively lobbies Congress on the mythologized concept of “church-state separation,” and does a whole lot of other things that poison our constitutional republic.

The mothers of these 49 Maryland soldiers who paid the ultimate price for their country over 100 years ago “designed the memorial to mirror the crosses that mark graves in American cemeteries overseas.” A plaque reads, “This Memorial Cross Dedicated to the Heroes of Prince George’s County who gave their lives in the great war for the liberty of the world” and lists the names of the dead, a sweet piece of history obviously lost on Fred Edwords and Steven Lowe, who are particularly offended by the memorial. Never mind that almost all of the boys (and girls) who served and continue to serve in the U.S. Armed Forces are Christians.

In 1961, after a highway was built around it, the Peace Cross was deeded to the Maryland-National Capital Park and Planning Commission and stood there without controversy until 51 years later, when the aforementioned ill-advised snowflakes sued, “arguing that they are offended by the government’s endorsement of religion and the fact that the cross is maintained with taxpayer money.” A district court ruled for the cross at that time, but five years later, the Richmond, Va.-based U.S. Court of Appeals for the Fourth Circuit reversed the decision, ruling that “the government had excessively entangled itself with religion.”

Of course, the enemies of the republic are using the document meant to amend the newly created U.S. Constitution, the so-called Bill of Rights, in particular the first 16 words from Amendment 1: “Congress shall make no law respecting an establishment of religion, or prohibiting the free exercise thereof; or abridging the freedom of speech, or of the press; or the right of the people peaceably to assemble, and to petition the Government for a redress of grievances.”

Although the “Free Exercise Clause” and the “Establishment Clause” are still debated by constitutional scholars, there is no question that God and religion were central in the lives of our founding fathers, so much so that James Madison Jr., the fourth U.S. president (1809-1817), known as the “Father of the Constitution,” “wrote near the end of his life that belief in God was ‘essential to the moral order of the world.’ ”

As Mark R. Levin explained in Men in Black: How the Supreme Court Is Destroying America (2005), “At the time of the ratification of the Constitution, America was an extremely religious nation.” “The framers,” he wrote, “never envisioned a time where the mention of God in the public square would be controversial, let alone illegal in certain circumstances.” In fact, said Levin, “The historical record is filled with examples of officials of the federal government invoking God during the same period that the Bill of Rights was ratified.”

So how did we get to the point that the mere mention of God in the same sentence as the word government causes many to cringe?

It all began at the turn of the 19th century, when the Danbury [Conn.] Baptist Association sent a letter on Oct. 7, 1801 to President Thomas Jefferson, “expressing concern over the lack in their state constitution of explicit protection of religious liberty, and against a government establishment of religion.” Jefferson wrote back on Jan . 1, 1802, saying in part:

Believing with you that religion is a matter which lies solely between Man & his God, that he owes account to none other for his faith or his worship, that the legitimate powers of government reach actions only & not opinions, I contemplate with sovereign reverence that act of the whole American people which declared that their legislature should “make no law respecting an establishment of religion, or prohibiting free exercise thereof,” thus building a wall of separation between Church & State.

Fast-forward to the middle of the 20th century, when in 1947 U.S. Supreme Court (SCOTUS) Justice Hugo Black, a Ku Klux Klan member and “longtime admirer of Jefferson, revived a previously obscure metaphor from Jefferson’s writings,” and “upended the long-standing balance between the government and religion in . . . Everson v. Board of Education.”

In his 1802 letter, Jefferson was merely explaining why he didn’t support “national days of fasting and thanksgiving, as George Washington and John Adams, his predecessors in office, had done,” not defining any wall of separation.

Despite this, wrote Levin, “the ‘wall’ is part of the lexicon of many Supreme Court cases that involve religion and it has led to an inconsistent and illogical series of decisions,” like 1962’s Engel v. Vitale, “a controversial and dubious decision that was at odds with American history,” which outlawed state-sponsored prayer, 1992’s Lee v. Weisman, which ruled that schools can’t sponsor clerics to conduct any type of prayer, or 2004’s Elk Grove Unified School District v. Newdow, where the U.S. Court of Appeals for the Ninth Circuit ruled the Pledge of Allegiance ran afoul of the Establishment Clause.

Of course, as Levin explains in his fine book, this clause “was never intended to ban the invocation of God in public forums or the voluntary participation in ‘ceremonies or rites that recognize God.’ In other words, it was never intended to create a strict wall of separation between church and state,” a term that, of course, appears nowhere in the U.S. Constitution.

Significantly, SCOTUS’s decision “could impact similar memorials in towns across the country and even Arlington National Cemetery,” states a Feb. 26 CNN article. The national cemetery holds two crosses, one a “13-foot-tall Latin cross called the Argonne Cross, dedicated in 1923 to the ‘memory of our men in France,’ ” and a 24-foot-tall Canadian Cross of Sacrifice, “donated by the Canadian government to honor Americans who died in war.”

While the Trump administration has voiced support for the Peace Cross, SCOTUS justices typically pay little mind to political preferences. SCOTUS heard oral arguments on Feb. 27, and we can expect a decision by late June. 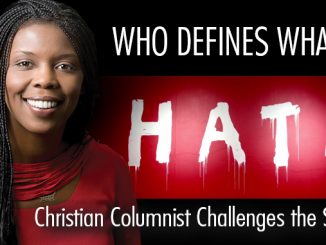 Who Gets to Define What’s ‘Hate’?