• Mexicans account for only about half of all nationalities sneaking into America.

According to recent statistics released by the United States Border Patrol, fewer than half of those apprehended along the U.S.-Mexico border are from Mexico. During the first six months of this year, 264,185 individuals were apprehended somewhere along the southwest border. Of those, 131,138 were originally from Mexico, comprising just under 50% of the total number apprehended.

Of the total, 45,604 Guatemalans, 44,574 Salvadoreans, and 30,585 Hondurans were apprehended, demonstrating once again that the majority of illegal immigrants flooding America have origins in Mexico and Central America. Mexicans and Central Americans have large diaspora communities in many U.S. cities throughout the nation.

Invariably, a significant portion of immigrants, especially illegal aliens, from Mexico and Central America have ties to gangs, drug cartels, and other unsavory characters, and few have the skills, education, or capital to make lasting contributions to the American economy.

Interestingly, 2,867 individuals from India were apprehended along the southwest border during the first six months of this year, while 1,498 Chinese were detained attempting to cross the U.S.-Mexico border. Thousands more from other parts of Asia and the Mideast have been caught as well.

There have been some positive trends of late.

Apprehensions of Mexicans along the southwest border have been declining in recent years, according to the Pew Research Center, but uncontrolled immigration facilitated and encouraged by the federal government has become a central issue in the 2016 elections. Donald J. Trump, officially nominated as the GOP candidate for president at the recent Republican National Convention in Cleveland, has harshly criticized America’s long-standing open borders policy as well as the widespread prevalence and acceptance of illegal immigration and increasing demands from the Obama administration, the Democratic Party, and radical leftist organizations for more immigrants and refugees being given either political asylum or refugee status, paving the way for their resettlement in America. 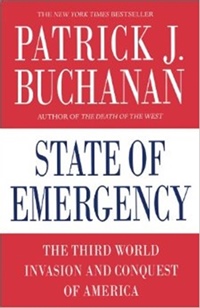 Immigration is becoming the most important topic not only in America, but across the entire Western world. For decades now, Western governments and international organizations, which are largely dominated and influenced by far-left groups and large corporate interests concerned almost exclusively with acquiring cheap labor, have systematically flooded Europe and European-derived nations with third-world aliens. The traditional peoples of the West are on the verge of being displaced and becoming a minority in the nations their ancestors founded and built, as their own governments sit back and do nothing.

Nationalist and populist political parties and candidates for office, epitomized by Trump in America, have gained popularity and traction in response. As the forces of globalism continue to promote and advance their insidious, nation-wrecking agenda, more and more patriots of all political persuasions are rallying behind nationalists.

This year’s U.S. election is largely going to be fought over this crucial issue. Will the American people back a maverick yet controversial businessman, who claims he will put America first, build a wall on the southern border to prevent illegal immigration, and limit immigration from nations where terrorist activity is prevalent? Or will the forces of globalism backing career criminal Hillary Clinton prevail?

Time will tell, but make no mistake: Immigration will be one of the most important issues of this 2016 election.