Rose Cherami was an unfortunate woman who had turned to prostitution and drug running to support herself. On Nov. 20, 1963, she was struck by a car in Louisiana. During her hospital stay, she told Police Lt. Francis Fruge and some nurses that President John F. Kennedy was going to be assassinated. Rose was one of Jack Ruby’s strippers and claimed that Ruby and Lee Harvey Oswald were more than close friends, laughing and calling them “bed mates” who’d been “shacking up for years.” That is interesting, as David Ferrie, Clay Shaw, Raymond Broshears, and Ruby were all known to have had homosexual proclivities, though several JFK researchers vehemently dispute the fact that Oswald himself did.

Cherami’s son, Dr. Michael Marcades, has written a revealing new book, Rose Cherami: Gathering Fallen Petals. Michael was only 12 at the time Rose died, the result of another “accident” in September 1965. Barely knowing his troubled mother, Michael uncovered a wealth of medical records, FBI memos, House Select Committee on Assassination documents, and more to reveal the truth about her life and death. Despite the death certificate listing “Dead on Arrival” on it, Michael discovered that she’d actually received over eight hours of intense medical treatment at Gladewater Municipal Hospital in Texas. Her injuries included what was certainly the real cause of her death: a close-range gunshot wound to the head. Jerry Don Moore was driving in the middle of the night when he claimed to have swerved to avoid her body, which was lying in the road. Authorities concluded that Moore accidentally caused her death by running her over.

Rose Cherami joined the lengthy list of those connected to the JFK assassination in some way whose deaths were unlikely and convenient.

“Initially, Mother’s connection to the mob, FBI, and her foreknowledge and multiple attempts to warn authorities about the impending assassination of President Kennedy was almost beyond comprehension,” Michael Marcades declared.

Not until mid-life did I experience a relentless desire to know my mother. This desire fueled well over 25 years of research: I had to know the truth. Initially, I began writing an indepth journal that fused together any and every known fact about Mother’s life and death. Much of this early research hinged on my having been given two grocery sacks filled with assorted documents, handwritten letters, photographs, multiple death certificates, and more—all belonging to Mother. Little did I realize that my discovery journey would last for over two decades and culminate in my completing a lengthy manuscript covering Mother’s entire life.

In 2016 and 2020, my journal was published. To this day, even after formulating a full picture of Mother’s life and murderous death, the pain remains. Extensive medical records, FBI memoranda, House Select Committee on Assassination documents, and other pertinent transcripts reveal facts that reveal both truth and lies associated with Mother’s struggle to overcome her demons, survive the cruelty of life foisted on those who live on the fringes, and the periodic, apathetic destruction of people by national politics.

Gary Shaw, co-author of the essential 1976 book Cover-Up: The Governmental Conspiracy to Conceal the Facts about the Public Execution of John Kennedy, and the powerful 1992 work JFK: Conspiracy of Silence, written with Dr. Charles A. Crenshaw, one of the Dallas doctors who worked on President Kennedy, met Michael in 1989, and wound up writing the foreword to his book about Rose. As Gary wrote in the foreword:

My interest in Rose began around 1966 when I met and began working with Penn Jones, a gutsy owner and editor of a small-town newspaper just outside of Dallas, Texas, the city where President Kennedy had been assassinated. . . . Penn had begun chronicling in his paper certain stories pertaining to the sudden and suspicious demise of a number of people who were close to events and/or individuals connected in some way to the assassination. One of these people was Michael’s mother, who died less than two years after the assassination, and under very mysterious and suspicious circumstances. . . . Melba Christine Youngblood Marcades, aka Rose Cherami, et. al., died at age 41, her death sinisterly shrouded in mystery. Many believe she had to be silenced because she knew too much and therefore was a threat to the real killers of our president. . . .

After Ruby shot Oswald the Louisiana authorities notified Dallas Police Homicide Chief Will Fritz about Rose’s information. Fritz replied that everything was now “in the hands of the Federal Agents” and gave them an agent’s name to call. Upon their contacting the agent [probably FBI Special Agent Vincent Drain], Louisiana authorities were informed that the Feds ‘weren’t interested’ at that time.

This author had the pleasure recently of interviewing Michael, Gary, and actress Sally Kirkland—who portrayed Rose in Oliver Stone’s 1991 film JFK—on Bob Wilson’s Beatles fan appreciation show “Tomorrow Never Knows.” Michael had been trying to contact Sally for years, and was tremendously moved by being able to talk with her.

Feisty Midlothian, Texas newspaper publisher Penn Jones Jr. was the first to begin tabulating the list of mysterious deaths connected to the JFK assassination. By the end of 1966, Jones found that 18 people associated with the assassination had died.

Dallas Deputy Buddy Walthers told many, including his wife, about finding a bullet in the grass at Dealey Plaza, which alone would have destroyed the official narrative. He was shot and killed while on duty in 1969.

Lee Bowers Jr. had a perfect airborne view of the assassination scene as an employee in the railroad control tower. He reported seeing a pair of strange automobiles driving in the area shortly before the assassination, one of which included a man talking into what appeared to be a microphone. He also saw a puff of smoke and some kind of activity behind the picket fence on the grassy knoll. Bowers died in a one-car accident in August 1965.

Congressman Hale Boggs was the closest thing the Warren Commission had to a dissenting member. After being driven to the airport by a very young Bill Clinton, Boggs disappeared in an airplane over Alaska. His body was never found.

Three men who met with Jack Ruby’s roommate George Senator a few days after Oswald was killed were all dead themselves by March 1965. Reporter Bill Hunter was shot to death in a police station in April 1964, the day after Senator told the Warren Commission he didn’t remember the meeting with Hunter. Another reporter there, Jim Koethe, was supposedly planning to write a book about the assassination. He died, believe it or not, from a karate chop to the throat as he stepped from the shower on Sept. 21, 1964. The third man present in Senator’s apartment, attorney Tom Howard, died suddenly of a heart attack at just 48, in March 1965.

Dorothy Kilgallen was a well-known columnist and television personality, a regular panelist on the popular game-show “What’s my Line?” She was the only journalist to get a private meeting with Jack Ruby and told friends (including Warren Commission critic Mark Lane) that she was going to “break the case wide open.” She was found dead in her apartment of a supposed drug overdose on Nov. 8, 1965. Her notes about the Ruby interview or any other work she was doing on the assassination were never found. Kilgallen was one of the very few professional journalists to express skepticism about the lone-assassin story.

During Jim Garrison’s investigation and prosecution of Clay Shaw, he lost some crucial witnesses to unnatural death. First and foremost was David Ferrie, whose connections to Oswald, Shaw, and others made him possibly Garrison’s most important witness. Ferrie was found dead in his apartment of what was officially concluded to be a brain aneurysm, despite the presence of what Garrison claimed were two typed suicide notes, which included typed signatures. Within hours of Ferrie’s death, his cohort Eladio del Valle was found shot through the heart, his head split open with an ax.

Several potential witnesses for the House Select Committee on Assassinations died before they could testify, including mobsters Sam Giancana and Johnny Roselli, and Lee Harvey Oswald’s curious mentor and seeming best friend, the wealthy, intelligence-connected George de Mohrenschildt, who supposedly shot himself in March 1977.

The infamous 1967 CIA memo on “Countering Criticism of the Warren Report” noted, “Such vague accusations as that ‘more than 10 people have died mysteriously’ can always be explained in some rational way . . . .” The mainstream media has ridiculed the notion that all the murders, suicides, deaths from accidental falls etc. of those who happened to be connected to the JFK assassination had anything at all to do with the assassination. The numbers tell another story. More examples can be found in the book Hit List: An In-Depth Investigation into the Mysterious Deaths of Witnesses to the JFK Assassination, by Richard Belzer and David Wayne.

A Nation at War With Itself 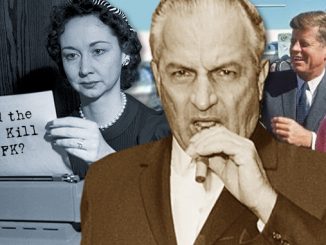 Will Court Agree to Exhumation?

The Fraud of Anti-Semitism Exposed