When this author predicted in AMERICAN FREE PRESS’s latest bestselling book, America’s Racial Powder Keg, that the United States would erupt into further race riots, it was no exaggeration. On the evening of April 17, thousands of black thugs swarmed onto Baltimore’s inner-city streets to carry out destruction. By night’s end, arsonists had set ablaze 144 cars and 15 buildings, including a $600 million senior housing center that had been under construction for low-income elderly residents. Over 100 police officers were injured battling the rioters and looters.

Most appalling of all, Baltimore’s black mayor, Stephanie Rawlings-Blake, not only issued stand-down orders to her men and women in blue, she also instructed law enforcement to “give those who wish to destroy space to do it.”

Thanks in part to her orders, millions of Americans watched in horror on live TV as helpless policemen, not allowed to react, were pelted with bricks and broken bottles.

In 1970, at Kent State in Ohio, the National Guard opened fire at student protesters after years of campus anarchy. Today, policemen have been reduced to the status of sitting ducks as criminal hooligans publicly abuse them on nationwide television.

Of course, almost immediately, liberal news outlets began complaining about white privilege and a racist police force. Yet in almost every high-profile incident that occurred over the past two years, rarely did law enforcement officers conduct themselves inappropriately. Rather, in the overwhelming majority of cases, the black thugs involved brought about their speedy end through their own actions.

Here are a few examples:

• After robbing a convenience store and strong-arming its clerk in Ferguson, Missouri on August 9, 2014, Michael Brown assaulted  Officer Darren Wilson and tried to steal his handgun. Before being shot, he bull-rushed Wilson, and at no time did he plead, “Hands up, don’t shoot.” That mantra surfaced as another media lie.

• Following a routine traffic stop in South Carolina on April 4, Walter Scott resisted arrest by fleeing the scene to avoid outstanding warrants against him.

• With an extensive rap sheet that included at least 18 arrests for narcotics possession, assault and burglary, Freddie Gray ran from cops on April 12 toward an area where he’d previously dealt drugs. He was arrested that day and died a week later from injuries to his spine that some believe were due to the fact he had had back surgery in the weeks before his detention. 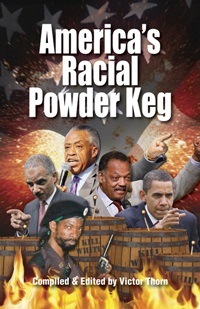 Incomprehensibly, the Establishment has sided with individuals like these men cited above, who have been transformed into martyred victim-heroes by the media and black leaders. Rarely, if ever, are their savage actions denounced. Instead, they have been handed a platform to espouse an anti-white agenda nationwide that continues day after day.

A case in point can be found in New Black Panther Party chief Hashim Nzinga. On April 28, Nzinga announced that his organization would be “willing to kill” to save the so-called black nation.