A federal judge has struck down the Anti-Riot Act as unconstitutional, due in part to the efforts of the fledgling Free Expression Foundation. This story was front-page news in the latest issue of American Free Press. If you’re a digital subscriber, click here to read your paper. Not yet a subscriber? Click here to review options.

In a stinging defeat for the hard left and its media enablers and collaborators and a momentous victory for constitutional liberty, on June 3 federal District Court Judge Cormac Carney granted the defense motion to dismiss the indictment in the Justice Department’s highly political prosecution in California of members of the Rise Above Movement (RAM) under the federal Anti-Riot Act.

In a solidly reasoned opinion, Carney struck down the Anti-Riot Act as unconstitutional and ordered the defendants’ immediate release. The RAM members, brought into the courtroom in shackles, were unshackled and walked away free men.

While primary credit must go to the hardworking defense counsel, the Free Expression Foundation (FEF) played an important role, providing legal analysis to the defense and submitting an amicus curiae brief that Carney, over the government’s opposition, accepted for filing. In short, right out of the gate FEF has had a major victory for free speech for all Americans.

As explained in a recent AFP article (April 8, 2019), the U.S. government’s attempted revival of the long-dormant Anti-Riot Act poses a grave threat to Americans’ First Amendment rights. The act improperly criminalizes mere intent alone, is in manifest discord with recent Supreme Court decisions, is flagrantly overbroad, and gives far too much discretion to the government to enforce it selectively on purely political grounds. And selective enforcement is precisely what happened in the RAM prosecutions. The government, bending to political pressure, averted its eyes from clear evidence that antifa groups attacked and disrupted pro- Trump rallies in California and the Charlottesville assembly. Of the hundreds of rowdy people at the rallies, only the eight RAM members were charged by the government.

Carney began his opinion by observing:

It is easy to champion free speech when it advocates a viewpoint with which we agree. It is much harder when the speech promotes ideas that we find abhorrent. But an essential function of free speech is to invite dispute. Speech “may in deed best serve its high purpose when it induces a condition of unrest, creates dissatisfaction with conditions as they are, or even stirs people to anger.” Terminiello v. City of Chicago, 337 U.S. 1, 4 (1949). Frequently, the public arena is the stage for these disputes. In the Civil Rights Era, for instance, protestors took to the streets to contest segregation and Jim Crow. Today, people continue to take their message to the streets, advocating on hotly contested issues, whether it be abortion, Black Lives Matter, climate change, or healthcare. One person’s protest might be another person’s riot.

Then, carefully analyzing the act, he noted,

[The act] covers far more than acts of violence. It also criminalizes activities that precede any violence and . . . reaches speech and expressive conduct. . . . No violence even need occur. A defendant could be convicted for renting a car with a credit card, posting about a political rally on Facebook, or texting friends about when to meet up.

Carney then identified a critical failing of the act: In manifest discord with Brandenburg v. Ohio, 395 U.S. 444 (1969) and other Supreme Court precedents, it does not require that advocacy be directed toward inciting or producing imminent lawless action. He further observed:

A riot is closely intertwined with political activity. A rioting crowd is often protesting the policies of a government, an employer, or some other institution, or the social fabric in general. A riot may well erupt out of an originally peaceful demonstration. The political nature of a riot increases the risk that the Anti- Riot Act criminalizes a substantial amount of protected expressive activity. To protect citizens’ important rights of speech and assembly, courts must be wary of government attempts to censor a particular view, especially on the basis that certain ideas cause “disturbances.” New ideas, more often than not, create disturbances. And to this end, speech may best serve its “high purpose.”

Attorneys Andrew Allen and Glen Allen, who acted on behalf of FEF in this matter, were jubilant about the decision.

“The act is flagrantly unconstitutional,” Glen Allen remarked, “and the fact that the government invoked it against only RAM members and not antifa calls into question the government’s fairness and impartiality. Thank God there is still sufficient integrity in our judicial system to check such abuses.”

Glen Allen also noted that the FBI and Justice Department relied heavily on reports from “Propublica” and a “Frontline” documentary in preparing the indictment and ignored the more balanced “Heaphy Report.”

Right out of the gate, The Free Expression Foundation has had a major victory for free expression, free speech and the right of assembly. Though it certainly will do nothing for his career, a California judge has ruled that the Anti-Riot Act is unconstitutional. But FEF has more work to do, and one of those tasks is to help attorney Glen Allen in his suit against the Southern Poverty Law Center, which used its influence to smear him as a “racist” and get him fired. Click the FEF banner above to learn more about FEF and help Glen with his promising lawsuit. 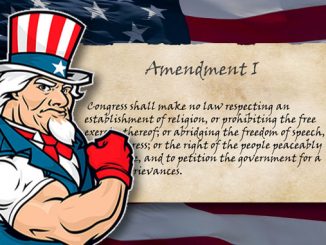 Free Speech Isn’t Free: We Must Fight for It!

Get AFP for Free