Newly elected socialist/communist politicians in the U.S. want you to open your purses wide. Do they not know that there will be no free program, as every program will have a cost paid by individual taxpayers and small business owners.

The mainstream media have spent months lauding the influx of radical new Democrats that walk the halls of Capitol Hill since winning the 2018 midterm elections. While their ideas can seem dangerously far-left, they are not new. They are also not a result of an isolated movement contained within the Democratic Party itself.

The most prominent media darling of the new crop has been 29-year-old Rep. Alexandria Ocasio-Cortez (D-N.Y.), who has announced that she will favor enacting a “Green New Deal.” The goal of the plan would be to end nearly all fossil fuel use by 2030. The plan is largely economic, but it also details environmental regulations and changes that would require expensive upgrades to every home and business.

In hindsight, leading Democrat analysts have decried Obamacare, explaining the failure was that it didn’t reach far enough. The Green New Deal calls openly for a single-payer healthcare system. As an attempt to solve the economic inequity that exists between the top and the bottom, Ocasio-Cortez is calling for a “basic income” program, as well as a federal jobs guarantee, which seeks to bring the unemployment rate to zero by using the government as the employer of last resort (ELR).

The Green New Deal is not the brainchild of one of the first millennials elected to Congress. It has its origin, at least in part, in the Canadian “Leap Manifesto” that socialist candidates have been endorsing there for over a decade. The Leap Manifesto called for a 100% dependency on green energy by 2050, a massive government program to retrofit housing, and a universal basic annual income. To finance the sea change in infrastructure needed, a stiff tax hike would be combined with the institution of a carbon usage tax.

Colleagues of Ocasio-Cortez—those labeled as the “radical new Democrats” by Fox News—are Rep. Ayanna Pressley (D-Mass.), Rep. Rashida Tlaib (D-Mich.), and Rep. Ilhan Omar (D-Minn.). In addition to supporting the Green New Deal, they all support free college for all, free healthcare for all, and the abolition of Immigration and Customs Enforcement. While this insurgency of new, young Democrats is the favorite story for stations such as MSNBC and CNN, many of the same ideas within the party were popularized by 77-year-old Sen. Bernie Sanders, who those same stations helped to defeat in the 2016 Democratic primaries.

It is much more difficult and much more expensive to repair an electric car, for example. College instructors have to be paid. Is there a point when regulations or a tax burden on a small business becomes too onerous to keep the doors open and the lights on? How does a small business owner afford a much larger minimum wage? There will be no free program, as every program will have a cost paid by individual taxpayers and small business owners. Every dollar given to someone must be taken from someone else, either voluntarily or by the force of law.

The Republicans can be indignant and self-righteously angry at the fire in the belly of the new Democratic representatives, but there should also be a modicum of self-evaluation happening within the GOP. The party has long supported a corrupt war state, a crippling war on drugs, harmful trade policies, and an economic inequity that hurt American workers. These “new” Democrats are a reaction to a GOP that laughed at Occupy Wall Street rather than taking it seriously, rather than hearing it. The anger didn’t end up in front of a video screen after all; it found its way to the nation’s capital at a swearing-in ceremony for the new Congress. The GOP is a party deficient of genuine concern for average Americans trying to live a life by classically conservative principles.

The American system of capitalism is far from ideal. Donald Jeffries brilliantly wrote about the “survival of the richest,” a game by which the system has been intentionally rigged to benefit those who were born into it and then stay at the top of the economic ladder.* But for even the most admirable staples of the American system to work, there must be a much larger group of givers than there are takers.

Though Ayn Rand’s Atlas Shrugged topped out at over 1,100 pages, its message is rather simple. Every giver has a moment when they assess their place in line at the counter of American capitalism. At the point when it becomes more profitable to be in the taker line, that person simply shrugs and steps right over, never to return.

If the Green New Deal and economic platform of the Justice Democrats ever become law, the givers that are expected to fund such initiatives may leave the line en masse, and America as we know it may never return. 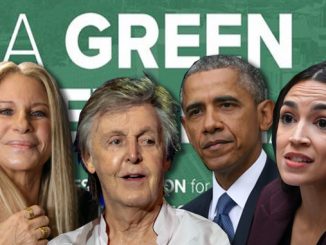 Enviro-Hypocrites Want You to Suffer While They Party