The following excerpt contains key portions of the letter President Donald Trump sent to Speaker of the House Nancy Pelosi (D-Calif.). AFP is publishing portions of this because Big Media continues to destroy any remaining credibility it has by choosing to mock the historic correspondence rather than actually report on it in a fair and objective manner.

The Honorable Nancy Pelosi
Speaker of the House of Representatives
Washington, D.C. 20515

I write to express my strongest and most powerful protest against the partisan impeachment crusade being pursued by the Democrats in the House of Representatives. This impeachment represents an unprecedented and unconstitutional abuse of power by Democrat lawmakers, unequaled in nearly two and a half centuries of American legislative history….

Your first claim, “Abuse of Power,” is a completely disingenuous, meritless, and baseless invention of your imagination. You know that I had a totally innocent conversation with the president of Ukraine. I then had a second conversation that has been misquoted, mischaracterized, and fraudulently misrepresented. Fortunately, there was a transcript of the conversation taken, and you know from the transcript (which was immediately made available) that the paragraph in question was perfect. I said to President Zelensky: “I would like you to do us a favor, though, because our country has been through a lot and Ukraine knows a lot about it.” I said do us a favor, not me, and our country, not a campaign. I then mentioned the attorney general of the United States. Every time I talk with a foreign leader, I put America’s interests first, just as I did with President Zelensky.

You know full well that Vice President Joe Biden used his office and $1 billion of U.S. aid money to coerce Ukraine into firing the prosecutor who was digging into the company paying his son millions of dollars. You know this because Biden bragged about it on video. Biden openly stated: “I said, ‘I’m telling you, you’re not getting the billion dollars’… I looked at them and said: ‘I’m leaving in six hours. If the prosecutor is not fired, you’re not getting the money.’ Well, son of a bitch. He got fired.” Even Joe Biden admitted just days ago in an interview with NPR that it “looked bad.” Now you are trying to impeach me by falsely accusing me of doing what Joe Biden has admitted he actually did.

The second claim, so-called “Obstruction of Congress,” is preposterous and dangerous. House Democrats are trying to impeach the duly elected president of the United States for asserting constitutionally based privileges that have been asserted on a bipartisan basis by administrations of both political parties throughout our nation’s history. Under that standard, every American president would have been impeached many times over. As liberal law professor Jonathan Turley warned when addressing congressional Democrats: “I can’t emphasize this enough… if you impeach a president, if you make a high crime and misdemeanor out of going to the courts, it is an abuse of power. It’s your abuse of power. You’re doing precisely what you’re criticizing the president for doing.”

Everyone, you included, knows what is really happening. Your chosen candidate lost the election in 2016, in an Electoral College landslide (306-227), and you and your party have never recovered from this defeat. You have developed a full-fledged case of what many in the media call Trump Derangement Syndrome and sadly, you will never get over it… .

Speaker Pelosi, you admitted just last week at a public forum that your party’s impeachment effort has been going on for “two and a half years,” long before you ever heard about a phone call with Ukraine. Nineteen minutes after I took the oath of office, The Washington Post published a story headlined, “The Campaign to Impeach President Trump Has Begun.” Less than three months after my inauguration, Rep. Maxine Waters (Calif.) stated, “I’m going to fight every day until he’s impeached.” House Democrats introduced the first impeachment resolution against me within months of my inauguration, for what will be regarded as one of our country’s best decisions, the firing of James Comey (see inspector general reports)—who the world now knows is one of the dirtiest cops our nation has ever seen. A ranting and raving congresswoman, Rashida Tlaib, declared just hours after she was sworn into office, “We’re gonna go in there and we’re gonna impeach the motherf****r.” Rep. Al Green said in May, “I’m concerned that if we don’t impeach this president, he will get re-elected.” Again, you and your allies said, and did, all of these things long before you ever heard of President Zelensky or anything related to Ukraine. As you know very well, this impeachment drive has nothing to do with Ukraine, or the totally appropriate conversation I had with its new president. It only has to do with your attempt to undo the election of 2016 and steal the election of 2020!

Rep. Adam Schiff cheated and lied all the way up to the present day, even going so far as to fraudulently make up, out of thin air, my conversation with President Zelensky of Ukraine and read this fantasy language to Congress as though it were said by me. His shameless lies and deceptions, dating all the way back to the Russia hoax, is one of the main reasons we are here today….

Before the Impeachment hoax, it was the Russian witch hunt. Against all evidence, and regardless of the truth, you and your deputies claimed that my campaign colluded with the Russians—a grave, malicious, and slanderous lie, a falsehood like no other. You forced our nation through turmoil and torment over a wholly fabricated story, illegally purchased from a foreign spy by Hillary Clinton and the DNC in order to assault our democracy. Yet, when the monstrous lie was debunked and this Democrat conspiracy dissolved into dust, you did not apologize. You did not recant. You did not ask to be forgiven. You showed no remorse, no capacity for self-reflection. Instead, you pursued your next libelous and vicious crusade—you engineered an attempt to frame and defame an innocent person. All of this was motivated by personal political calculation. Your speakership and your party are held hostage by your most deranged and radical representatives of the far left. Each one of your members lives in fear of a socialist primary challenger—this is what is driving impeachment. Look at Rep. Nadler’s challenger. Look at yourself and others. Do not take our country down with your party….

Any member of Congress who votes in support of impeachment—against every shred of truth, fact, evidence, and legal principle—is showing how deeply they revile the voters and how truly they detest America’s constitutional order. Our founders feared the tribalization of partisan politics, and you are bringing their worst fears to life.

Worse still, I have been deprived of basic constitutional due process from the beginning of this impeachment scam right up until the present…. More due process was afforded to those accused in the Salem Witch Trials.

I have no doubt the American people will hold you and the Democrats fully responsible in the upcoming 2020 election. They will not soon forgive your perversion of justice and abuse of power….

One hundred years from now, when people look back at this affair, I want them to understand it, and learn from it, so that it can never happen to another president again.…

—DONALD J. TRUMP
President of the United States of America 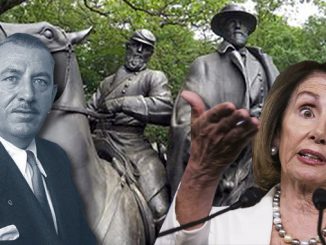