Make a $30 donation to AMERICAN FREE PRESS, America’s Last Real Newspaper, and get the new book, BEAM ME UP! The Writings of Jim Traficant, absolutely FREE!

Jim Traficant of Ohio was one of the most outspoken public officials ever to grace the United States political stage over the past 100 years at least. First, as a sheriff from Mahoning County, and then, as a U.S. representative of the 17th Congressional district, which was the site of his hometown, Youngstown, Jim refused to forget the people who elected him, bucking the powers that be to protect and serve his constituents, no matter how troubled the waters. Later he became known as one of the most politically incorrect lawmakers in American history.

But the U.S. government doesn’t like mavericks like Jim Traficant. For his very public stances on many issues that didn’t coincide with the goals of big business, big banking, big government and big media, he was railroaded to prison by the Federal Bureau of Investigation and Department of Justice. 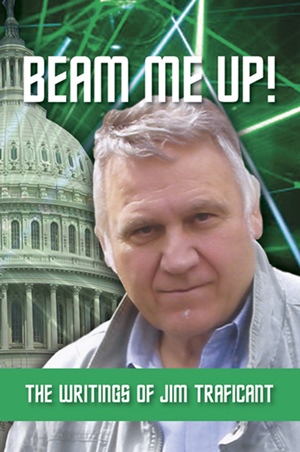 Upon his release from prison in 2011, Jim wrote for AMERICAN FREE PRESS newspaper (AFP) until his tragic death in 2014 on the family farm. Jim said that AFP was one—if not the only—media outlet that actually told the truth about his time in office and the scheme to punish this honest public servant.

This is our tribute to James A. Traficant: a collection of more than 150 of his best columns, taken from the pages of AFP. Topics covered include eliminating the Internal Revenue Service, unfair taxes, illegal immigration, the outrageous U.S. national debt, relations with the state of Israel, the Federal Reserve scam and many, many more.