Americans should realize the U.S. and Iran are fighting the same enemies and perhaps take a lesson from Iran at the 40th anniversary of its revolution.

America’s mainstream propaganda media keep telling us to hate Iran. Trump’s key advisors, Secretary of State Mike Pompeo and National Security Advisor John Bolton, and neocon-influenced outlets like Fox and Breitbart, hate Iran even more than the liberal media does. So I expect to make few friends, and quite a few enemies on all sides of the spectrum, by saying that in many respects Iran’s Islamic Revolution, which turns 40 years old this February, would be a good model for American renewal.

Disclaimer: I will be traveling to Tehran in February for a New Horizons NGO conference celebrating the 40th anniversary of the Islamic Revolution. In the past I have traveled to New Horizons conferences in Iran alongside people like former Sen. Mike Gravel (D-Alaska), ex-U.S. Army psy-ops officer Scott Bennett, former Defense Department Senior Security Policy Analyst F. Michael Maloof, and Culture Wars magazine editor E. Michael Jones. What’s more, I was responsible for getting all four of those patriotic, highly accomplished Americans invited to Iran. I have been friends with some of the New Horizons organizers since 2012 and agree with them that Americans are sadly misinformed about the Islamic Republic and its relations with the U.S.

It is one thing to say that the United States should mend fences with Iran. Many mainstream experts agree on that, but it is quite another to say the U.S. should consider emulating the Islamic Republic. Isn’t Iran a theocracy? Doesn’t the Supreme Leader have quasi-dictatorial powers? How could the U.S. possibly follow such a model?

I am certainly not calling for an American Islamic republic presided over by Shia religious scholars. Though come to think of it, that wouldn’t be any worse than what we have now. Instead I want to suggest that we should consider being faithful to our own unique identity in the same way Iran is faithful to its identity. And just as Iran’s identity as a fully independent, democratic-republican, anti-imperialist, anti-international-banker Islamic nation with a Persian-dominant ethnic history grows out of its 1979 revolution, America’s ostensible identity as a fully independent, democratic-republican, anti-imperialist, anti-international-banker Enlightenment-Christian nation with a European-dominant ethnic history grows out of our revolution of 1776.

The big difference is that Iran is holding steadfast to its revolutionary Islamic republican principles, while the U.S. has treasonously betrayed its own identity. We should emulate Iran not by adopting theocracy but by returning to the principles of our revolution and sticking by them even when powerful foreign interests pressure us to abandon them.

The Iranian Islamic Revolution of 1979, like the American Revolution of 1776, was in essence a revolt against the world’s biggest empire of the time and against the international bankers who owned that empire. In both cases, the bankster empire was trying to impose its ideology on its occupied colony: The British Empire of 1776 represented royalty and authoritarianism, while the American revolutionaries embraced anti-authoritarian, democratic-republican Enlightenment thought.

Likewise, the U.S.-Zionist Empire of 1979 represented secular-humanist, globalist, capitalist materialism, while Iran’s Islamic revolutionaries wanted national independence and a return to their own Islamic tradition.

Interestingly, the Iranian revolution did not reject democratic-republicanism, but instead enshrined it in its constitution. Today, Iran is the Middle East’s only genuine democracy, with a supreme leader who is himself popularly if indirectly elected, and who enjoys powers comparable to the American president and chief justice.

Both the American and Iranian revolutions quickly came under attack by the forces of empire. The British, unhappy with the loss of their American colonies and bent on revenge, burned Washington, D.C. to the ground in the War of 1812, fomented the southern secession of 1860, seized control of America’s currency in 1913, and dragged the U.S. into two world wars it had no business fighting.

The 1979 American Empire, guided by New York bankers and their City of London and House of Rothschild friends, likewise tried to overthrow Iran’s Islamic Revolution. George H.W. Bush and Donald Rumsfeld armed Saddam Hussein to the teeth with chemical weapons, which during the 1980s U.S.-imposed war were unleashed in vast quantity against the people of Iran—a much bigger catastrophe than Americans suffered when Washington, D.C. was burned by the British in 1812.

After the Empire’s then-puppet Saddam Hussein failed to overthrow the Islamic Republic, the Zionist-imperialists continued to plot against Iran, culminating in the 9/11 false-flag operation. As former National Security Council member Gwenyth Todd recently stated on my “Truth Jihad” radio show, the purpose of the U.S. invasions of Iraq and Afghanistan was to surround Iran with U.S. bases—and then invade and overthrow the Islamic Republic on behalf of Israel.

Bottom line: Both the U.S. and Iran face the same enemy: the Zionists. We Americans should resist and expel them—as Iran has—and regain our independence. 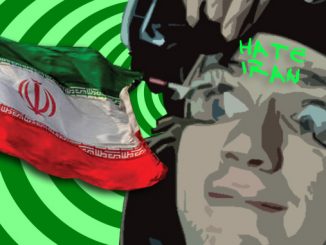 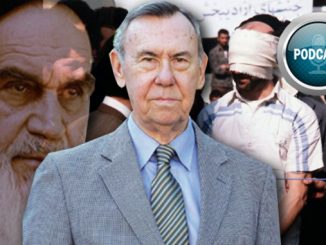