The USS Liberty massacre and 9/11 will be featured topics in an event organized by Texas architect Ron Avery. “The Ship That Won’t Sink!” will be held at an as-yet-undisclosed location near San Antonio and live-streamed for Internet viewers around the world. Speakers will include AFP’s Dave Gahary and Mark Anderson, among others. Mr. Avery’s creativity and persistence in finding a workaround to present his first “Great Topics Fest” after his original venue suddenly backed out speaks volumes about his dedication to the truth and his patriotism. Well done, sir!

Ron Avery, the Texas architect who’s done extensive studies and presentations on the construction of the twin towers—and doesn’t believe for a second the U.S. government’s conspiracy theory—is kicking off a series of live and live-streamed conferences called the “Great Topics Fest,” with the first planned for Sept. 8, titled “The Ship That Won’t Sink!”

Live streaming is video recorded and broadcast online in real time, like a “beach cam” to view the conditions of the shoreline, or a “zoo cam” to watch the animals there.

Avery set everything up, including selecting the speakers, paying for their transportation, choosing the venue, signing the contracts, constructing the sets, wiring the audio/visual equipment, and everything else you could think of.

This writer, along with fellow American Free Press writer Mark Anderson, are two of the featured speakers set to make presentations in front of a live crowd and the many more online viewers who purchase tickets to the live-stream portion of the event.

The venue selected, the luxurious Hotel Contessa on the San Antonio Riverwalk—a few blocks away from the legendary Alamo—was all ready to go, until Ron heard from the hotel, as he explained in an exclusive interview with this writer.

“When I asked for a little more lead time to get in and fix up the room,” he said, “I didn’t hear from them for a couple of days, and I just got this letter by overnight mail, mailed to my home.”

The letter—dated Aug. 15 and addressed to “Dear Mr. Avery” from the hotel’s general manager—was short and sweet, just seven curt sentences, with the first one stating:

I am writing to inform you that, unfortunately, the Hotel Contessa must exercise its contractual right to cancel The Ship That Won’t Sink event scheduled to occur at the hotel Sept. 7-8, 2018.

General manager Troy Mathews apologized “for any inconvenience,” and wished Avery “the best” for the event.

“The last two years that I’ve tried to hold a ‘9/11 truth’ event,” Avery said, “people tried to shut the venue down.”

One time they were successful, and Avery was forced to host the presentation beside a pool in a condominium complex.

“So, we ended up having it by the pool at night,” he said, “with no light. I videotaped it with one camera with the infrared on, just so we could see the presentation.”

Avery has already found a new venue. Tickets to attend the event are $27.59 each. To listen to the conference on the Internet live-streamed are just $10. Tickets can be easily purchased online at mixnstream.com/ship-wont-sink.html.

Due to possible outside influence causing the cancellation of our contract with the Hotel Contessa, we will not release the location of this new venue until the day before (9/7/18) in order to reduce the ability of those who are offended by the truth from harassing the venue and causing another cancellation of our event. So stay tuned for the location later. We will email all seat ticket holders the location privately. For now we will say that the location is within 75 miles of San Antonio, Texas.

“I’m not going to do the poolside thing anymore,” he vowed. “We’ll have it indoors like other human beings have their presentations.”

Avery is optimistic about the outcome.

“I think it’ll be a great group of speakers, and I think people are going to be blown away with the presentation,” he said. “I do believe that this year—2018—this event will be the one to watch on live stream. Of all the ones out there, this will have the most powerful presentation and the most meaning for all Americans.” 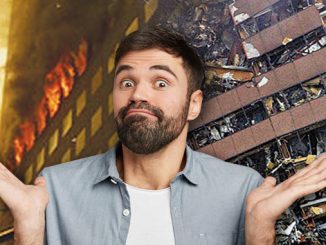 2 Comments on Hotel Too Scared to Host Confab?