“The Post,” a new movie from Tom Hanks and Steven Spielberg about the famed Pentagon Papers that Daniel Ellsberg released to The New York Times in 1971, ignores the role of The Washington Post‘s CIA-controlled editors and long history of promoting U.S. intelligence agency propaganda. Instead, the movie promotes the “legend” of the paper as a stalwart American institution.

In the new film “The Post,” Tom Hanks and Steven Spielberg have once again crumpled up real history in favor of boosting the legend of a mainstream American institution. Their previous attempt, “Parkland,” which was a failure at the box office, propped up the questionable work of both Vincent Bugliosi and the Warren Commission. This time the deific canonization by two of Hollywood’s most powerful players is reserved for executive editor Ben Bradlee and publisher Katherine Graham of The Washington Post.

In 1971, Daniel Ellsberg, a military analyst working for the RAND Corporation, released to The New York Times what would commonly be known as “the Pentagon Papers,” a top-secret study of American decision-making in Vietnam. The released report cast doubt on the U.S. government’s honesty regarding its Vietnam War policy. It was White House Chief of Staff H.R. Haldeman who emphasized the substantial importance of the release to President Richard Nixon, who initially did not grasp the Ellsberg releases as a matter of grave importance.

“To the ordinary guy, all this is a bunch of gobbledygook,” Haldeman told Nixon on June 14, 1971. “But out of the gobbledygook comes a very clear thing. . . . You can’t trust the government, you can’t believe what they say, and you can’t rely on their judgment. And the . . . implicit infallibility of presidents, which has been an accepted thing in America, is badly hurt by this, because it shows that people do things the president wants to do even though it’s wrong, and the president can be wrong.”

Attorney General John Mitchell sent a telegram to the Times, demanding that they stop publication of “the Pentagon Papers,” but the Times refused and continued the publication. The government then sued to halt publication. Though the paper eventually won New York Times Co. v. United States at the Supreme Court, an earlier appellate court had ordered the publication to be halted.

Correctly anticipating federal legal action against The New York Times, Ellsberg had distributed “the Pentagon Papers” to over 30 newspapers and private contacts. It was a guerrilla strategy based upon information-by-attrition. Although The Washington Post, featured in the new movie, was one of the papers that received the distributed report, they were neither more nor less important to the story than any of the others.

Jim DiEugenio of KennedysAndKing.com wrote, “Once Ellsberg made his decision to go public with the [LBJ Secretary of Defense] Robert McNamara-commissioned top-secret history, it was just a matter of how many newspapers would pick up the story after The New York Times initially published it.”

DiEugenio pointed out that in Ellsberg’s 457-page Secrets: A Memoir of Vietnam and the Pentagon Papers (2002) Bradlee is mentioned only once and Graham is not mentioned at all. “The Post” obviously did not use Ellsberg’s Secrets as source material for the script.

The Washington Post is no stranger to playing the public relations and media saturation games in order to create the mythology that it owned a consequential story. Though similar reporting was being done by the Los Angeles Times, The New York Times, and others—often before The Washington Post—the official story of Watergate is now synonymous with the Post’s Bob Woodward and Carl Bernstein, whose account became a best-selling book and a major motion picture.

Critics of The Washington Post have long asserted that the newspaper has been used as a cover-up asset for U.S. intelligence. Woodward, for example, was portrayed by All the President’s Men as a hungry, young reporter who had been an outsider writing about filthy restaurants. In reality, Woodward had worked at the Pentagon under Adm. Thomas Moorer. According to “Watergate.com,” Woodward ran the communications center and was responsible for the delivery of messages from the Pentagon to the White House and the National Security Council. While performing these duties, Woodward nurtured a connection with Gen. Alexander Haig, who some researchers claim later provided Woodward with some of the information attributed to “Deep Throat,” Woodward’s anonymous source.

In recent years, Accuracy in Media (AIM) has criticized the Post’s lack of transparency regarding the ties of Jeff Bezos to the Central Intelligence Agency (CIA) and the National Security Agency. Bezos, the founder, chairman, and CEO of Amazon.com, purchased the Post for $250 million in 2013. He has also brokered for Amazon a $600 million contract with the CIA.

Last December, the Post was the preferred outlet for anonymous CIA leaks regarding Trump and Russia. An unnamed source told the Post that a secret CIA report had concluded that Russia interfered in the 2016 election for Trump.

Glenn Greenwald of online news source “The Intercept” wrote about the “explosive story that, in many ways, is classic American journalism of the worst sort: The key claims are based exclusively on the unverified assertions of anonymous officials, who in turn are disseminating their own claims about what the CIA purportedly believes, all based on evidence that remains completely secret.”

In April, critics blasted the Post for allowing a lobbyist from Raytheon—which manufactures Tomahawk cruise missiles—to publish pro-war editorials without disclosing his background. After the missile strikes in Syria, Raytheon’s stock skyrocketed.

Whether influencing Hollywood productions in an attempt to disfigure credible history or allowing the infiltration of anonymous CIA influences, The Washington Post has a problem that is both historical and current.

In their perpetual drive to be the paper of record on every story that traversed the Graham dynasty, it is now apparent that the Post—the newspaper and its depiction on film—is an untrustworthy media source for those who actually prefer their truth to be truthful. 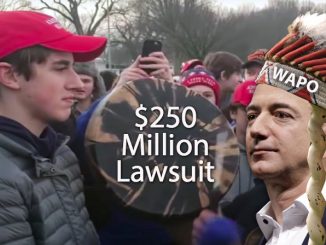